Lufthansa Group will have to seriously score with its SCORE “Change for Success” restructuring programme to keep its position as Europe’s most profitable airline group after it incurred a consolidated EUR381 million operating loss for 1Q2012. Although 1Q is a seasonally weak quarter, the loss from operating activities in the first three months of 2012 deepened 125% from the EUR169 million operating loss posted in 1Q2011. The group’s net loss reduced 22% year-on-year, to EUR397 million from EUR507 million in the year-ago period, when results were negatively affected by changes in present value of hedging options.

The worse than expected financial performance is indicative of the dire operating environment in Europe. Denmark’s Cimber Sterling Group filed for bankruptcy on 3-May-2012 following on the demise of Spanair in Jan-2012 and Malevin Feb-2012.

Revenue at Lufthansa Group rose in 1Q2012 by 5.6% to a “record” EUR6.6 billion. The additional revenue, however, could not offset the 6.1% hike in overall operating expenses to EUR7.6 billion, largely due to a 23% increase in fuel costs. Those rose year-on-year with 23% to EUR1.6 billion despite a small 0.5% reduction in volume as it operated 2.2% less flights.

Fuel was not the only culprit for Lufthansa’s higher expenditure. Group chairman and CEO Christoph Franz eagerly blamed the air traffic tax imposed in Germany and Austria and the costs of emissions trading, which came into force in Jan-2012. “Higher taxes, fees and charges put a massive strain on our quarterly result,” Mr Franz said. “We cannot wait until politicians also recognise the damage that one-sided taxes and charges do to aviation and to Europe's reputation as a place to do business. Our SCORE programme is our own response to these additional burdens. It will safeguard Lufthansa's position as number one in Europe and enable us to maintain our place in global competition in the long-term.”

Despite a system-wide 3.7% increase in yield per RPK, the Lufthansa Passenger Airline Group posted a 1Q2012 operating loss of EUR445 million with all carriers contributing to the deficit. Even its crown-jewel subsidiary SWISS reported a EUR6 million shortfall, reversed from a EUR17 million operating profit in the year-ago period, on an 11% increase in revenue to EUR967 million. SWISS CEO Harry Hohmeister said that the market environment remained difficult and warned that “the volatility in our industry has now reached unprecedented levels.” Mr Hohmeister gave a bleak outlook for the company and said: “We see no sign at present of any imminent market recovery. And fuel prices and currency movements, too, are unlikely to offer us any better prospects any time soon.”

Persistently loss-making UK subsidiary bmi was sold to IAG, for a gross purchase price of GBP172.5 million although this will be markedly reduced because bmi did not manage to divest its regional operator bmi regional, nor its LCC bmibaby.  With the divestment of bmi Lufthansa disassociated itself from its “strongest loss-maker” although it will remain responsible for bmi’s pension deficit. The company said that the “negative net purchase” price after price deductions will be amortised within one year.  The final evaluation of the transaction will appear in its 2Q2012 results.

In releasing its 1Q2012 results on 3-May-2012, Lufthansa Group revealed that it will cut 3,500 full-time jobs in administrative departments worldwide over the coming years as part of its SCORE programme and hinted that jobs cuts on the operational side cannot be ruled out, which might prelude a summer animated with strikes. Although the German workforce is overall a little less quick to call a strike than their French colleagues, industrial action is a way of life in Germany and Lufthansa operations in the first three months of the year were hallmarked by a rash of external strikes such as by apron controllers in Frankfurt, the air traffic control union (GdF), as well as several warning strikes organised by the trade union ver.di at various sites in Germany.

While Lufthansa’s administrative redundancies will be global the main burden will be in Germany, where up to 2,500 of the planned job losses will be.  “We can only safeguard jobs for the long term and create new openings if we reorganise the administrative functions and accept job losses now,” Mr Franz said, stressing that he hopes to achieve the cuts “preferably by means of socially responsible measures”, such as attrition and voluntary redundancies. The job cuts should reduce costs in administrative functions by 25%.

The company’s SCORE project, launched in Jan-2012, is aimed at improving the Group’s operating margin in the long term, with cost savings of at least EUR1.5 billion targeted by end-2014 through synergies, costs savings, organizational changes, revenue improvement and the execution of all the defined targets.

As part of the SCORE package, Lufthansa has started a greater and long overdue cooperation with its LCC Germanwings and the two airlines now plan joint capacity for decentralised traffic from Düsseldorf, Berlin, Hamburg, Stuttgart and Cologne. The non-hub fleet will be harmonized on Airbus A320 family aircraft and some Bombardier CRJs. A new code-sharing agreement has also been in place between Germanwings and Austrian Airlines since Mar-2012.

To halt losses at Austrian and following unsuccessful negotiations with its works council, Austrian will go ahead with the transfer of flight operations to regional subsidiary Tyrolean Airways as of 01-Jul-2012.

Lufthansa Passenger Airlines, the largest company in the Group, has been earmarked to contribute EUR900 million of the targeted EUR1.5 billion improvement in operating profit, of which EUR600 million is to come from cutting costs and EUR300 million from boosting revenue.  According to Mr Franz, “Growth in the passenger business was and is necessary to maintain the market position of the Lufthansa Group. The logical and predictable next step is to reduce the complexity in the Group that this growth has brought about”.

Capacity growth targets have once again been reset downwards and now cut to zero for 2012 and a maximum of 4% for the years 2013 and 2014 each. CFO Stephan Gemkow said during an analyst presentation to discuss the 1Q2012 results that 2012 capacity for the Passenger Airline Group will be trimmed a further 1% to 2% while scheduled capacity of Lufthansa Cargo will be adjusted an additional two percentage points, resulting in a capacity reduction of 2% compared to 2011. Despite the new night-flight restrictions of Lufthansa Cargo’s main hub in Frankfurt and the steep rise in fuel prices, Lufthansa Cargo generated an operating profit of EUR19 million for 1Q2012.

Mr Franz said that the company's fleet will not be enlarged until 2014 with new aircraft replacing older ones. Its fleet modernisation programme includes 168 new aircraft deliveries between 2012 and 2018, including 40 aircraft in 2012. Lufthansa just took delivery of its first new Boeing 747-8 Intercontinental.

See related article: As A380 continues to be restricted in India, Lufthansa to deploy 747-8 to Delhi and Bangalore

The Lufthansa Group reiterated an earlier forecast that it is still expecting revenue growth compared with the previous year and the operating profit is predicted to be in the “mid three-figure million euro range” – meaning around EUR500 million – but this is excluding the group’s restructuring costs in connection with job losses as part of SCORE. It is highly likely that these will have an adverse effect on the result for the current financial year. 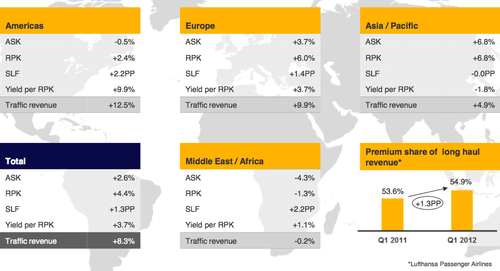 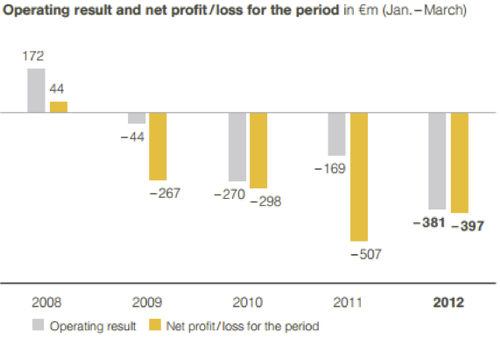