Cities in Japan and Korea have far larger local markets than do the homes of existing long haul LCCs. This could even negate the need for precious short haul feed. Airlines could transfer existing flights to a long haul LCC platform and/or use it to expand to new markets. This could occur in an airline's main city or a smaller city where it has a low nonstop long haul presence.

AirAsia X offers a same-ticket connection service to other flights in the AirAsia Group, and Scoot’s need for feed drove the merger with its sister airline Tigerair.

In Europe, Norwegian is partnering with easyJet (each has completely separate ownership), while LEVEL is working to partner with Vueling, both of which are owned under the IAG Group.

Korea and Japan will be different. Feed will help long haul LCCs, but the need is less pressing.

Populations are large in Seoul, Tokyo and Osaka. This gives a far greater local catchment area than available to other long haul LCC bases.

Further, the populations are affluent, unlike China’s vast collection of smaller cities that have tens of millions of people but where the propensity to travel is still low. 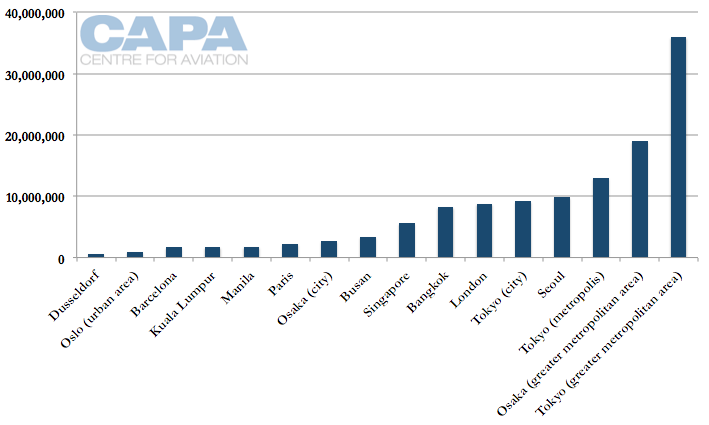 Japan is much larger than Korea, and the shinkansen high-speed train is more expensive, but the shinkansen’s prolific frequency has made it a part of everyday life.

Where would a Japan or a Korea-based long haul LCC fly to?

CAPA's recent report on the European market from Japan and Korea highlighted the significant underpenetration of Japanese airlines in Europe. That creates significant opportunity for a Japanese LCC.

Even though Korea already has a larger footprint in Europe there is still considerable opportunity, but the constraint is a lack of Russian overflight rights. If it was not for the lack of overflight rights, Jin Air – the only long haul LCC in Korea – would probably already serve Europe.

The presence of these long haul LCCs and talk from prospective entrants has made it clear that there is a market that will travel with lower amenities. Profitability is more subjective – and there are many doubters – but with market potential proven, it is up to airlines to see if they can make a profitable offering.

AirAsia X and Scoot both serve Japan and Korea.

Cebu Pacific uses its widebody A330s on some regional Asian flights to overcome slot and traffic right restrictions. On the basis of distance these are not long haul flights, but the use of high-density widebodies introduces a new operating platform into markets.

Rouge’s sole Asian service is to Osaka Kansai, which is often overlooked by full service airlines as the Osaka region lacks Tokyo’s high-yielding corporate and premium traffic. Although cargo out of the region is good, it is not enough to compensate for lower yields (and cargo can be transported to Tokyo).

No European low cost, long haul airline serves Japan or Korea, but there are plans.

Norwegian and Eurowings have a limited footprint in Asia: Norwegian only flies to Bangkok and Singapore, while Eurowings only serves Thailand.

Norwegian and Level have made clear that they want to grow in Asia, but for Northeast Asian services they are waiting for overflight rights from Russia. If the overflight rights were available, Norwegian would already have a larger presence in Asia, for sure.

Spain's Minister of Public Works and Transport Inigo de la Serna stated in Feb-2018 that Spain and Russia had reached an air transit agreement allowing for trans-Siberia overflight rights from an additional point other than Madrid.

This has led to speculation about LEVEL and Norwegian launching Barcelona-Tokyo. Norwegian CEO Bjørn Kjos has previously said that air traffic rights are an issue for planned new routes, including a Barcelona El Prat-Tokyo Narita service, and that Norwegian would launch the service "immediately" if the rights were sorted.

Notes: *Level does not have its own operator's certificate; all its aircraft are currently operated under Iberia.
^Eurowings' A330 fleet is operated by SunExpress Germany, which is also part of the Lufthansa Group.
French Bee was initially known as French Blue.
Excludes LCCs that only use widebody aircraft for charters, or only on short haul routes.
Source: CAPA - Centre for Aviation and Fleet Database.

Japan and Korea are home to some of the world's most premium airlines. This creates an opportunity to have an airline with a simpler service and resulting lower costs.

Much debate about long haul LCCs is on how much difference they can establish from incumbents. The high service and high cost of a Korean, and especially Japanese, full service airline creates room for marked differentiation.

There are reasons for LCCs holding multiple AOCs

Such constraints are not new to Japan and Korea. For Asiana, it was better to establish a second LCC (Air Seoul) than expand its first LCC (Air Busan). Korean Air's LCC, Jin Air, already operates widebody aircraft.

Similarly to Asiana, ANA maintained two LCCs (Peach and Vanilla), although these will be consolidated by 2020. ANA is expected to operate its fleet of three A380s (all serving Hawaii) on a slightly different platform from that of ANA mainline. Details are still to be confirmed.

This could result in Japan Airlines needing to show a competitive response. If Jetstar Japan remains uninterested in long haul operations, or JAL wants to coordinate routes only among fully owned units, JAL may need to consider new platforms also.

Launching a new airline requires capital, and all the more so for a long haul operation where the necessity of larger aircraft means higher lease payments or ownership costs. As operating expenses are higher, there is greater demand on cash flow.

A new independent long haul-only LCC is difficult to foresee. More likely a development is that an existing LCC will extend into long haul flights, or a full service airline will establish a low cost, long haul airline.

ANA and JAL are suited to high capital expenditure. Both are cashed up and – a rarity in the industry – under shareholder pressure to spend cash reserves. Both have large order backlogs (mostly of widebody aircraft), and tend to take delivery of aircraft under direct ownership instead of via lessors.

ANA and JAL fleet ownership comparison: as at 19-Mar-2018

Asiana and Korean Air are not as flush with cash. Korean Air has been transferring old 777-200s to Jin Air, reducing upfront costs for the LCC.

A long haul LCC might be a distraction for Asiana, which is using the new LCC Air Seoul to make gains in the short haul LCC market. Asiana mainline needs to grow long haul to have a more relevant overall market.