The lifting of sanctions against Iran will surely produce a flurry of international expansion. Mahan Air, now larger than flag carrier Iran Air, has been growing in China while waiting for European opportunities.

Mahan and Iran Air currently account for about 35% of seat capacity in Iran's international market. Turkish is the largest foreign carrier in Iran with about a 12% share of international seat capacity, followed by Emirates and flydubai with 9% and 6% respectively.

Dubai is already a hub for Iranian business and could further prosper, with resulting benefits to airlines. Dubai is the largest market for Mahan and Iran Air, helping ensure air traffic rights are not a one-sided request. flydubai serves nine cities in Iran, more than any other foreign carrier; Turkish Airlines serves seven and has more favourable geography for connections to Europe and North America. Secondary cities could be important as foreign carriers swamp Tehran.

There are currently 28 foreign carriers operating passenger services to Iran, according to OAG data. Aegean was the most recent new entrant, launching Iran services in Jul-2015.

AirAsia X and Air Astana have already stated they are preparing to launch services to Iran in 2016. There will likely be many more new entrants, particularly from Asia. China Southern is now the only east Asian airline serving Iran.

From Western Europe, only Austrian, Alitalia, Germania and Lufthansa currently serve Tehran. Air France, British Airways and KLM have withdrawn but could potentially be tempted to resume services.

Iran's international capacity is largely a story between its two local carriers and the region's new network giants.

Mahan Air and Iran Air have a 35% share of international seats to/from Iran, according to OAG data for Aug-2015. There is a combined 32% share from Turkish Airlines, Emirates, flydubai, Qatar Airways and Etihad Airways.

Turkish is the single largest foreign carrier with a 12% share followed by Emirates' 9%. flydubai has a 6% share, and while it focuses on point-to-point traffic, it has a sizeable connecting market and access to Emirates' network. 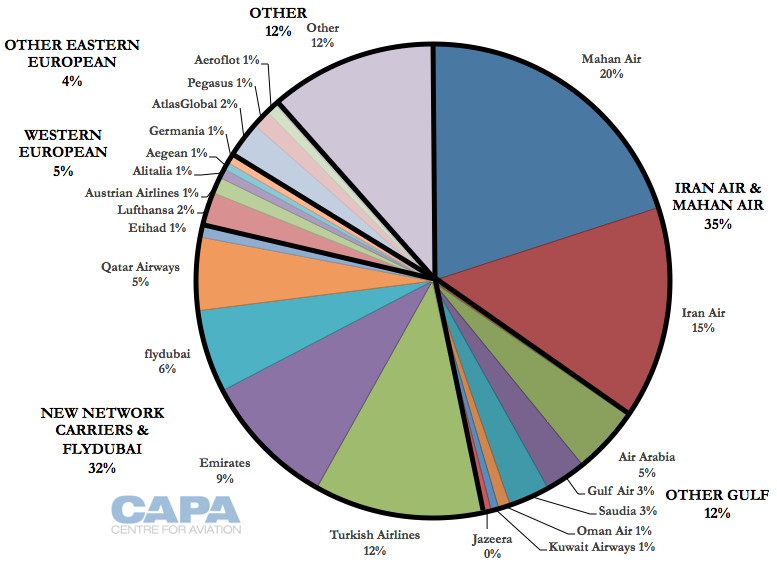 Dubai and Istanbul are the largest destinations from Iran

Perhaps unsurprising since Turkish, Emirates and flydubai are the largest foreign carriers in Iran, the largest countries based on seats to Iran are the UAE and Turkey. Dubai and Istanbul are the two most popular cities by far. 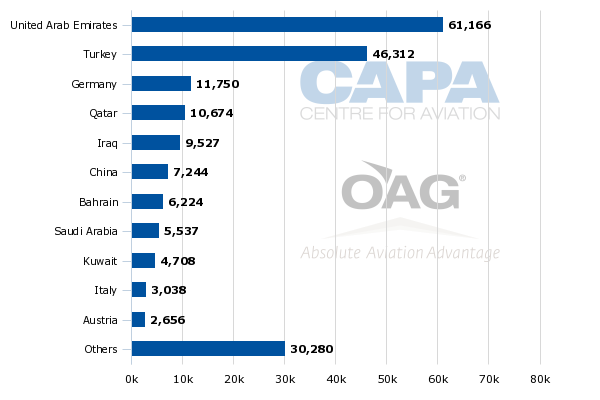 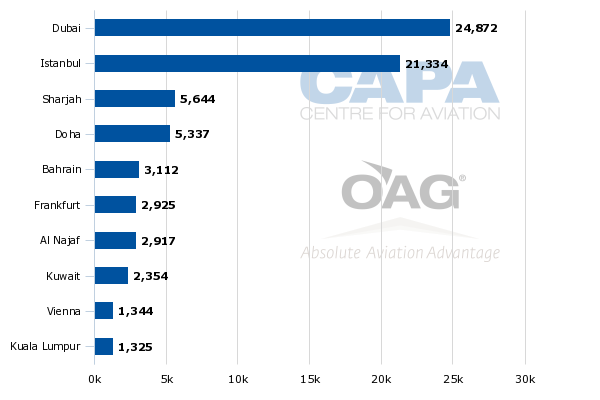 This is not solely due to foreign carriers. Dubai is the largest destination for Mahan Air and Iran Air.

Istanbul is the next largest destination for Mahan Air. For Iran Air, it is Malaysia and Istanbul is eighth largest. 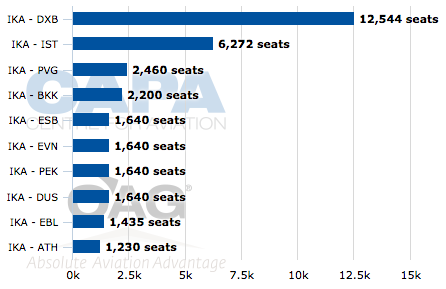 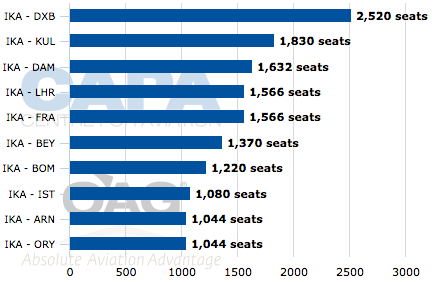 Emirates and flydubai account for 63% of seat capacity in the Dubai-Iran market with Iranian carriers comprising the balance. Mahan Air holds 23% of the market, over half of Emirates' 40% share Iran Air has only a 9% share of seat capacity between Dubai and Iran.

(Note: All flights in the Dubai-Iran market are currently from Dubai International. There are not yet any scheduled flights to Iran from Dubai World Central.) 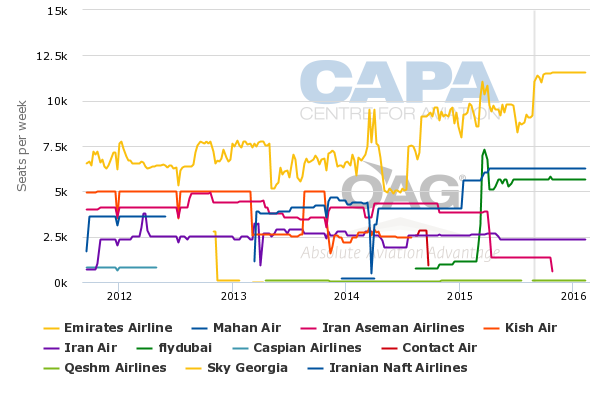 Between Istanbul and Iran, Turkish Airlines holds 55% of capacity in the market and Pegasus 6%. Mahan Air holds 14% while Iran Air once again has a smaller share at 2%.

91% of Turkish Airlines' Iran capacity is from Istanbul Ataturk with 9% from Istanbul Sabiha Gokcen. Turkish does not link Iran with any other Turkish cities. 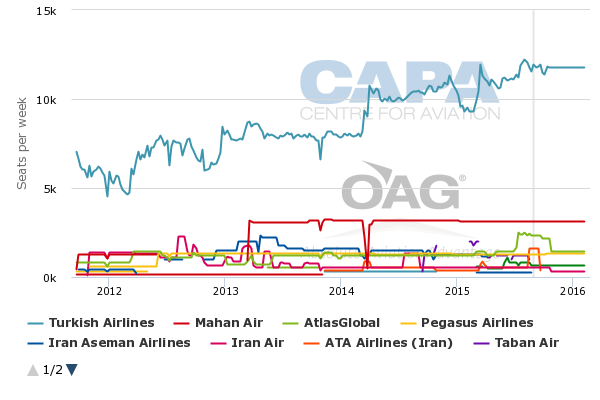 In both markets, foreign carriers are aggressively growing. Emirates has grown Tehran while adding Mashhad. flydubai has rapidly built up an extensive Iranian network while Turkish Airlines has been growing as well.

To Dubai, Mahan has grown while Iran Aseman has decreased. To Turkey, Iran Air and Mahan Air have been relatively consistent, alluding to Dubai's position as a hub to access Iran.

Estimates put Iranians residing in the UAE at 400,000. The UAE is Iran's largest trading partner after China, and The Economist reports 10,000 Iranian businesses and trading companies in the UAE.

The networks of flydubai and Turkish Airlines are impressive not just for their size but diversity. flydubai serves nine points in Iran, more than any other foreign carrier. Turkish Airlines is second (but the largest full-service carrier) with seven points.

Air Arabia, the LCC from Sharjah, serves six points. Only on 01-Sep-2015 does Emirates open a second point in Iran. Etihad still only has one and Emirates two while Qatar has three.

At only 1,197km, Dubai is relatively close to Tehran. Istanbul is 2,045km away. For Europe and North America, Turkish Airlines has a geographical advantage.

Stronger local demand between Iran and Dubai could however support more flights and thus open spare capacity to link with Europe and North America. Depending how liberal or protectionist Iran is with foreign carriers, Dubai could gain an advantage over Istanbul since Iranian carriers will want more seat capacity to Dubai than Istanbul.

Looking at the airports with over 2% international marketshare, Tabriz is closer to Istanbul than Tehran while Isfahan and Shiraz are closer to the Gulf than Tehran.

Doha is somewhat closer to Tehran than Dubai, but Qatar has far fewer Iranians living or visiting there; relations between the countries are frosty. Qatar Airways would be relying heavily on transfer traffic whereas Emirates or flydubai could see more local traffic.

Mahan Air flies internationally only from Tehran while Iran Air is mostly focused on Tehran.

Tehran could potentially emerge as an international hub but networks will be limited and Iranian carriers lack the brands that hub carriers in the Gulf or Turkish Airlines have. Tehran is geographically well positioned for domestic to international connections but an airport transfer is necessary as IKA handles international flights only while Mehrabad is almost entirely domestic.

Iran sees service from four LCCs (including hybrids): flydubai and Air Arabia from the UAE, Turkey's Pegasus and Kuwait's Jazeera. Collectively they account for about 12% of international seat capacity to/from Iran. This compares to LCCs accounting for 11% of seat capacity to/from the wider Middle East region, and 20% for travel within the Middle East.

Two of the LCCs are from Iran's top markets. flydubai, based in its namesake city of Dubai, accounts for 23% of the Dubai-Iran market in Aug-2015. This is up from only 3% a year prior, when the carrier had a limited presence in Iran.

Pegasus, based in Istanbul, accounts for only about 6% of seat capacity in the Istanbul-Iran market. Pegasus only serves Iran from Istanbul. 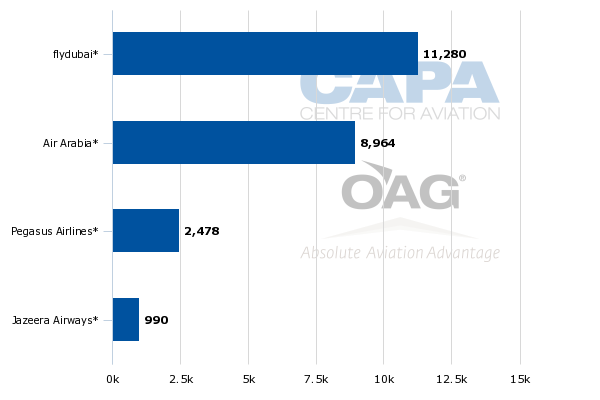 The UAE and Dubai are the largest destinations for Mahan Air and Iran. (The only point they serve in the UAE is Dubai.)

Germany is also a top market, but their networks divide: Turkey and China are big for Mahan Air while Malaysia and Kuwait are large for Iran Air. Mahan is probably better positioned, although its US terrorism sanctions will limit growth irrespective of changes to economic sanctions.

Mahan Air sees China as a growth market. It serves Beijing, Guangzhou and Shanghai and would like to make each daily at leas. Beijing is currently served four times weekly, Guangzhou three and Shanghai six.

Southeast Asia is a lower priority and Europe high. About 15% to 20% of Mahan's traffic is transit but the carrier expects more point-to-point traffic as economic situations improve. 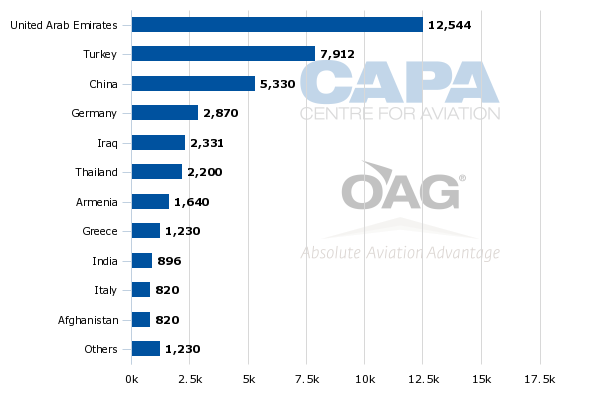 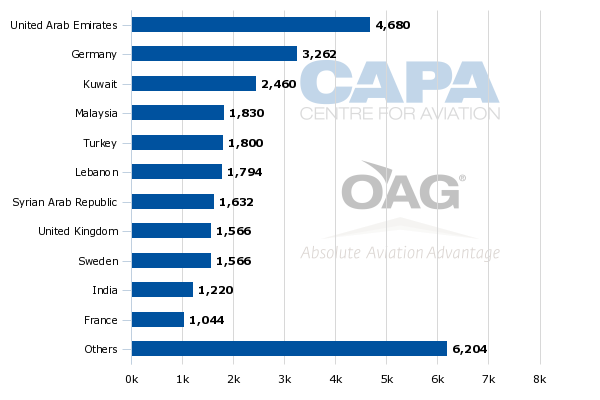 Outlook: it will be hard to take lead away from Turkish Airlines and Gulf carriers. Secondary cities could be less competitive as Tehran sees rush

The existing size of Turkish Airlines and Emirates will be difficult for foreign carriers to beat. Protectionism is always a risk, but Dubai might breathe easy for once since Iranian carriers will have sizeable demand to fly to Dubai. This will create reciprocal opportunities for Emirates and flydubai, even if Dubai's carriers could grow more than their Iranian counterparts.

Iran will likely mirror Myanmar in that once sanctions are lifted and economic activity is on the rise, foreign carriers will arrive. Myanmar's Yangon saw more than 10 foreign airlines arrive within a year. Nearly every carrier which was already serving Yangon also added capacity within one year after country opened up.

As Iran is a much bigger market, Tehran could see an even larger arrival – and more growth from existing carriers. But unlike Myanmar, where there are only three international airports and almost the entire market is focused on Yangon, Iran is a lot more than just Tehran.

For now only Mashhad may be considered by carriers flying in from afar. Regional carriers will be able to leverage shorter distances and close trade links with Iran to reach numerous smaller cities. Tehran could quickly become extremely competitive and see overcapacity, making other cities more attractive to foreign carriers.

Turkish Airlines' existing seven destinations in Iran are impressive and puts the carrier in a strong position as the market starts to capture more attention from foreign carriers. It is beaten only by flydubai's nine. Emirates' cooperation with flydubai is often distant, but an Iran rush may see Emirates cosy up with its well-placed cousin.

The lure of a new opportunity, an untapped market, will lose some attractiveness once airlines work through the details. A number of carriers are considering new service or resuming. Some, more extensive in their planning, are starting to worry about matters like fuel reliability and if this is too great a hurdle.

European carriers have suspended service: bmi in 2012, British Airways in 2007, Air France in 2008 and KLM in 2013. Lufthansa has decreased frequencies but maintained capacity. Aegean Airlines launched service in Jul-2015. Asia appears poised for faster growth; China Southern is the only east Asian carrier in Iran.

Whereas Myanmar's international boom was mostly experienced by foreign carriers as domestic carriers were initially unable to develop international networks, Iran's carriers already fly long-haul and are eager for international growth. Expansion has been a long-time coming. But so too is a re-introduction to the GDS, interlines and partnerships – all made difficult to impossible under sanctions. The question for Iran is how much access it grants to foreign carriers and when. Carriers from Myanmar might say too much was given away at the start, limiting their opportunities now. Mashhad airport said it welcomed growth from all airlines; time will tell if it retains and can push the government to support this pro-liberalisation view.

Iran's carriers will want to make up for lost time, but will also look to develop partnerships. Foreign carriers will probably be surprised by how little they know of Iran and its aviation sector but how much Iran knows of them even if it lacks their experience. Together, there can be symmetry – and, for sure, growth.

See related report: Iran aviation: the next market for aircraft manufacturers. Can growth be as fast as hoped?