Announcements concerning new airport infrastructure are rare at the moment – other than those that refer to projects being suspended or even cancelled altogether.

However, the UK’s Leeds Bradford airport (LBA) – one that is relatively underutilised given the economic power of one of the cities it represents –  has chosen this time to announce a new terminal, which it hopes will help it compete with nearby Manchester Airport as the country’s ‘Northern Powerhouse’ strategy unveils further. If the application is approved, work could start before the end of 2020, with the terminal to be completed in 2023.

Manchester and Leeds-Bradford airports are approximately 45 miles apart and (with other airports) they serve an extended catchment area with a population of more than 25 million people. The Yorkshire and Humber area (planning region) is one of the fastest growing regions in the UK, with a population growth of 6% since 2001.

Ultimately, it is not new terminals or surface transport hubs that attract airlines; rather, it is business potential, and in that respect LBA has much work to do to attract new airlines when Manchester has had a full complement of them.

Leeds Bradford Airport has submitted a planning application to Leeds City Council to build a replacement terminal. The plans propose construction of a three-floor 34,000sqm development on an alternative site within the airport's boundary. If the application is approved, work could start before the end of 2020, with the terminal to be completed in 2023.

The UK tourism agency 'Welcome to Yorkshire' hit the nail on the head when it said that the economic impacts of a new terminal could benefit the economy.

CEO of Welcome to Yorkshire James Mason said: "Any future opportunities to attract people to the area, to have an airport expanding and competing with Manchester and others, is something we would be all for".

‘Competing with Manchester’ is something that LBA has never really done. The two airports are approximately 45 miles apart and, together with Liverpool and Doncaster Sheffield airports, they serve an extended catchment area with a population about the same as the Netherlands and Belgium combined, more than 25 million people.

Manchester always had considerable advantages over the others. Once the government of the day had decided against locating a major airport for the north of England at Liverpool in the 1970s (reputedly because of Liverpool’s industrial relations record), Manchester benefitted from becoming a diversion airport for London Heathrow for the new generation of wide body aircraft and also from the construction of a motorway network, which included a connection straight into the terminal complex.

Latterly Manchester has also benefitted from a rail station at the heart of the airport, with services from throughout the north. None of the other airports has this, and especially not Leeds Bradford.

Consequently, Manchester was able to build an impressive route network, both short haul and long haul, although it has never been able to establish itself as a hub, having no home-based carrier.

Ironically, as the LBA announcement is made, Manchester has had to put the opening of its own Terminal 2 extension on hold, one that was intended to project it into the future as an alternative to its older decaying infrastructure. 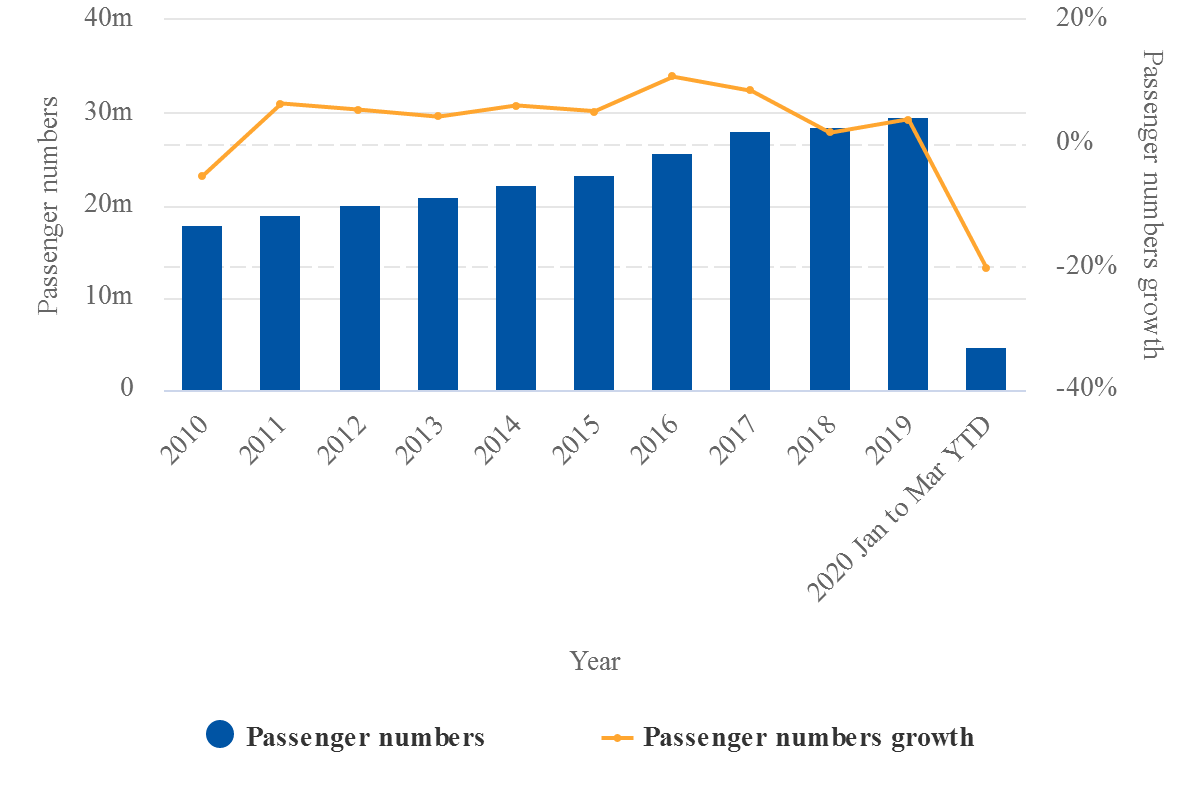 There is more to Leeds than most people know

Leeds is the third most populous English city (and Bradford the seventh), in the fourth most populated city-region (West Yorkshire), and has particular economic strengths in the finance and legal sectors. It claims to be the #2 British city for the finance sector outside London.

The Yorkshire and Humber area (planning region) is one of the fastest growing regions in the UK, with a population growth of 6% since 2001.

However, the airport was municipally owned until it was 100% acquired in May-2007 by the London-based private equity firm Bridgepoint Capital for GBP145.5 million, for what still remains as the highest airport sector earnings multiple in history; certainly for a small regional airport.

Private equity is not renowned for investing in assets for the long term, but Bridgepoint did, pumping GBP30 million into capex projects, including a terminal upgrade (although the original plan was for GBP70 million). Employee numbers grew from 200 to around 460, passengers by 40%, and EBITDA increased by over 25% per annum.

A contrast with municipal ownership, which invested little.

Bridgepoint had a similar record previously at Birmingham Airport, where as the largest private sector shareholder for five years it contributed to investment of GBP200 million. 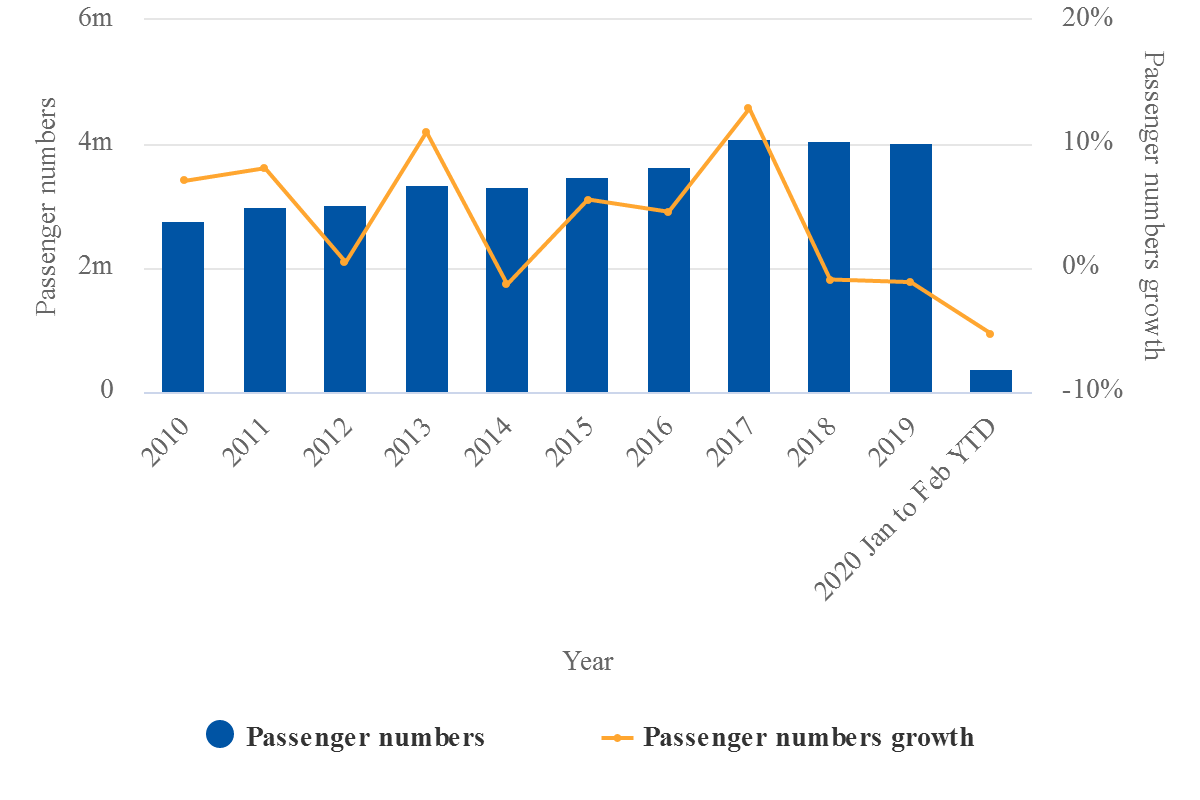 In Oct-2017 LBA was sold (100%) to Australia’s AMP Capital’s global infrastructure fund, with passenger numbers that had increased to four million annually. AMP also partly owns Newcastle Airport, about 100 miles to the north.

According to AMP, LBA “was a compelling investment due to its excellent location and strong growth prospects as well as AMP Capital's expertise and successful track-record of investing in airports globally within its infrastructure portfolio for more than 20 years”.

Under normal circumstances, a mix of low cost, charter and major international airlines operate at LBA airport, which benefits from a direct catchment area of 5.3 million people, 2.9 million of whom live less than one hour from the airport (allowing for the fact that accessibility is not the best there is, either by private vehicle or public transport).

The airport primarily offers international short haul flights to customers as well as an established network of domestic destinations. There is a British Airways connection to London Heathrow several times a day.

On the other hand, LBA has been unable either to acquire or retain the services of foreign flag carriers such as Lufthansa, KLM or SAS, which is a similar problem to that experienced at Liverpool. BA will not do that job.

In that sense, Manchester has been supreme, as it has been in the mid haul and long haul sectors. In a country that is dominated by the capital and its hinterland, so that the degree of Business and First Class travel is considerably less in the regions, there is realistically only room for one airport per region to handle business travel demand with frequency.

In aviation terms, the 'Northern Powerhouse' is focused on Manchester

And that is what the ‘Northern Powerhouse' – a strategy that got under way while George Osborne was Chancellor of the Exchequer in the Cameron government (and as MP for a constituency right next door to Manchester Airport) – is all about.

In aviation terms, for the reasons mentioned above the Powerhouse is focused specifically on Manchester and, despite the claims made by LBA, on Liverpool, Doncaster, Newcastle and Tees-side airports. The plan is supposed to direct economic growth towards the regions and away from London (without strangling it), and a powerful gateway airport is at the nexus of that strategy.

So could LBA make a contribution to that strategy while Manchester plays the major international gateway role?

In the sense that LBA has a select catchment area of its own – it could. The Pennine Hills provide a natural barrier between the two airports, although not to so significant a degree as to make intercontinental services workable at LBA as well as Manchester.

Apart from the prospect of a new terminal, what LBA also has going for it is the support for a rail station that would make journeys from the city centre easier and could potentially tie it in to the regional network, enabling its catchment area to grow further. However, what becomes of surface public transport in the light of current circumstances is uncertain.

Ultimately, it is not new terminals or surface transport hubs that attract airlines; rather, it is business potential, and in that respect LBA has much work to do, within what is effectively a chicken and egg situation, to attract new airlines when Manchester has a full complement of them. 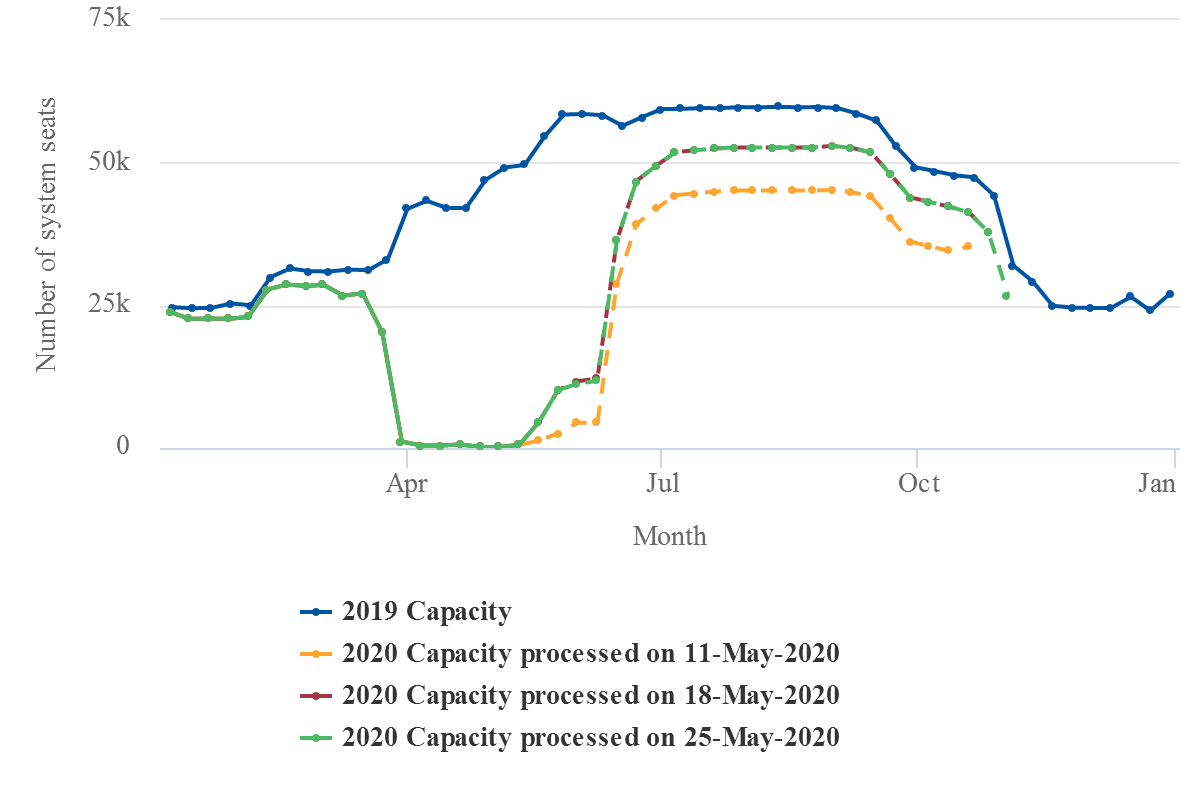