Europe’s airports are seeing a “slow and gradual air traffic recovery”, which started over the Summer and “which has mainly been driven by low cost airlines”, according to ACI-EUROPE, reviewing members’ traffic data for Oct-2009.

The industry body added, “the pace of recovery is more pronounced for freight, as the significant gap between freight traffic and passenger traffic that characterised this downturn has now narrowed considerably. This reflects the fact that European economies are no longer in recession and that business confidence is improving.”

ACI-Europe Director General, Olivier Jankovec, however noted that October was the 14th consecutive month of traffic declines, warning, “we are not out of the woods yet”. Close to 60% of European airports continue to lose traffic “and for many, the coming months will remain very challenging”, said Mr Jankovec.

He added this week’s closure of Coventry Airport in the UK is a “stark reminder that airports continue to be severely affected by this crisis”.

Individual airport passenger traffic performances for Nov-2009 gathered by The Centre, however, show some further signs of improvement:

Elsewhere, Auckland Airport confirmed full-year passenger numbers would not fall as much as previously expected, as traffic over the past five months has exceeded forecasts.

The company stated underlying earnings in the year ending 30-Jun-2009 would be “at the high end of the NZD93 million (USD68 million) to NZD100 million range previously forecast".

The airport’s shares rose as much as 3.8% in intra-day trade, before settling up 1.6% yesterday. 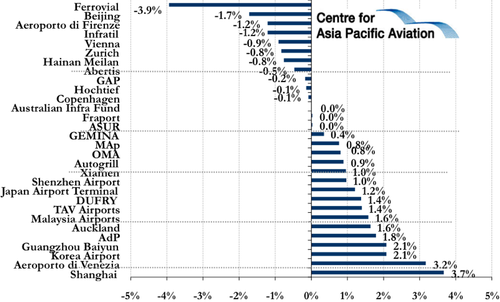