The outlook for Latin American airlines appears mixed for the remainder of 2019 as some of the region’s largest markets face weakening economies just as airline capacity begins to climb. Overall, the IMF is forecasting tepid economic growth for Latin America and the Caribbean in 2019 ahead of a rebound in 2020.

Some of the largest airlines operating in two of Latin America’s largest aviation markets – Brazil and Mexico – are expressing concern about capacity growth. The airlines growing in those countries have stated the counterargument that their capacity increases are warranted and the growth is largely targeted towards uncontested markets.

For now, those airlines believe their respective rationales for capacity expansion remain sound, and they are not likely to backpedal on their growth.

Latin America’s economy has been slumping out of economic weakness during the past couple of years, with fits and starts in its economic growth.

Recently, Colombia Reports quoted the IMF’s director of the Western Hemisphere Alejandro Werner stating that in 2019 the forecast 0.6% real GDP growth for Latin America and the Caribbean would be the lowest since 2016; however, the IMF expects a rebound in growth of 2.3% for 2020.

There have been downward economic revisions for two of Latin America’s largest aviation markets – Brazil and Mexico – and some of the largest airlines operating in those countries are expressing concern about capacity growth in their respective markets.

Brazil’s domestic passenger levels increased by 1.5% in 1H2019, to 45 million. Domestic capacity fell by 1.4% year-on-year during that period, while traffic increased 1.1%. The country’s fourth largest airline, Avianca Brasil, sought creditor protection in late 2018 and ceased operation in May-2019.

Previously, Avianca Brasil’s largest competitors cited a certain level of capacity rationalisation in the country’s domestic market after the airline’s demise, but market dynamics appear to be changing in 2H2019.

Brazil’s largest airline, GOL, has raised some concerns about competitive capacity for the remainder of 2019. GOL expects domestic demand in Brazil to grow by 7% in 2019, and is forecasting that its domestic ASK growth will grow between 5% and 7%.

GOL executives recently advised that the company would post 3% domestic capacity growth in 2Q2019, but noted that industry growth would settle towards 12%. “We [the industry] don't have demand growing at that level”, stated GOL CFO Richard Lark.

Azul believes its capacity growth is warranted, given that more than 50% of its domestic network remains unchallenged. In Jul-2019 Azul executives explained that the airline was operating 226 routes, of which 24 were new. Of those 24 new routes, only five were former Avianca Brazil markets.

The airline expects that at YE2019 it will remain unchallenged on 70% to 71% of its routes, the majority of which are domestic. That is unchanged from YE2018.

“That trend is going to continue”, said Azul chief revenue officer Abhi Shah. “These examples show that we have plenty of capacity growth, network growth opportunities in our network."

Mexico charted domestic passenger growth of 8.6% year-on-year in 1H2019, to 25.6 million, but the country is also facing a softening economic forecast. Its GDP is projected to grow just 1.1% in 2019, compared with previous projections of 2.2% growth.

The country’s only global full service carrier, Aeromexico, has six grounded Boeing 737 MAX 8 jets, which has resulted in the airline posting negative 2.2% capacity growth in 2Q2019, and the airline is forecasting a 3% to 4% drop for all of 2019.

However, Aeromexico has still commented on what it deems as aggressive capacity growth in spite of the country’s weakening economic environment.

“…We feel that it is not sustainable to have double digit growth, close to 20% in seat availability, in an economy that is not growing, or is growing only 1%”, company CEO Andrés Conesa recently stated.

Data from CAPA and OAG show that growth in Mexico’s domestic seat growth is peaking in Jul and Aug-2019, before tempering in 4Q2019. 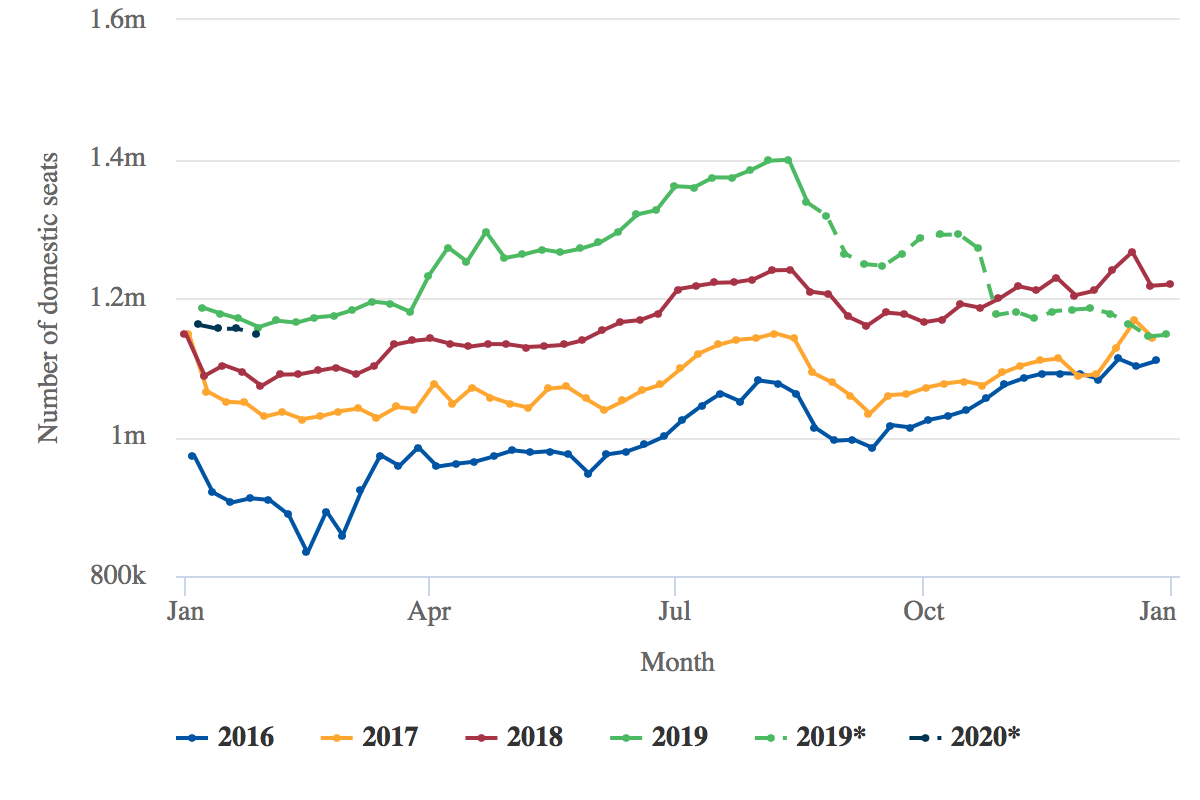 Source: CAPA - Centre for Aviation and OAG * These values are at least partly predictive up to 6 months from 12-Aug-2019 and may be subject to change.

The Mexican ULCC Volaris, which has overtaken the Aeromexico group as Mexico’s largest domestic airline measured by passenger share, grew its domestic ASKs 22% year-on-year in 2Q2019.

For 3Q2019 Volaris is planning network capacity growth in the high teens year-on-year, split evenly between domestic and international (including its Central American subsidiaries); this growth will be largely through high levels of aircraft utilisation. During 1H2019 Volaris’ average aircraft utilisation was 12.9 hours.

But even as Volaris touts growth in noncompetitive markets and stresses its ramp up in utilisation as the main drivers of it capacity increases, EVP of the airline Holger Blankenstein has stated that the competitive landscape plays a role in the company’s capacity guidance.

“You’ve seen some of the high cost airlines in Mexico scale back domestic capacity and we're taking advantage of that and backfilling in our core markets capacity”, he explained.

In many ways it has been a sideways recovery for Latin America’s economy during the past couple of years as airlines in the region have navigated numerous challenges, including currency fluctuations and swings in fuel prices.

Until recently, most of the airlines that call Latin America home have had a generally positive view regarding capacity growth as operators worked to align the supply-demand dynamics with the economic performance of the region.

Now some Latin American operators are expressing concerns about industry capacity growth in Brazil and Mexico, yet the airlines driving that growth believe the expansion is justified as they work to expand their respective market shares in Latin America’s two largest aviation markets.