Japan is the latest market to illustrate the new reality of the airline industry; that capacity and traffic levels move in inverse relationship to the number of new COVID-19 cases.

From Japan being one of the countries with most success in combatting the pandemic last year, a new surge in infections is threatening to wipe out much of the local airline industry’s hard-won gains.

The latest spike in cases in Japan has prompted the government to declare a state of emergency for the second time since the coronavirus first emerged. This has caused the two major airlines to scale back their domestic schedules in January and February.

Such moves are causing further pain to the country’s tourist industry, which is already hurting from the lack of international travellers. It is also exacerbating concerns about whether the Olympic Games will be held in Tokyo in Jul-2021, as scheduled.

Japan is far from being the only Asia-Pacific market that has had a promising rebound derailed by a new flare-up of COVID cases.

Australia, for example, was finally benefitting from a substantial recovery in domestic capacity in the fourth quarter, but capacity plans have been cut back due to a surge that has resulted in more state border closures. Some of the most successful countries in restoring domestic travel, such as Vietnam and China, have also had temporary setbacks due to spikes.

The question now for Japan will be how long it takes to get the latest resurgence under control.

Last year was supposed to be big for the Japanese market

Japan’s travel industry was expecting 2020 to be a banner year thanks to Tokyo’s scheduled hosting of the summer Olympic Games and expanded flight capacity at Tokyo’s airports.

However, the emergence of COVID-19 crushed these expectations. Statistics released by Japan’s Ministry of Land, Infrastructure, Transport and Tourism (MLIT) show that domestic passenger volume was down by 93% year-on-year in May-2020, and in October (the most recent month available) it was rising, but was still down by 50% versus the previous year. 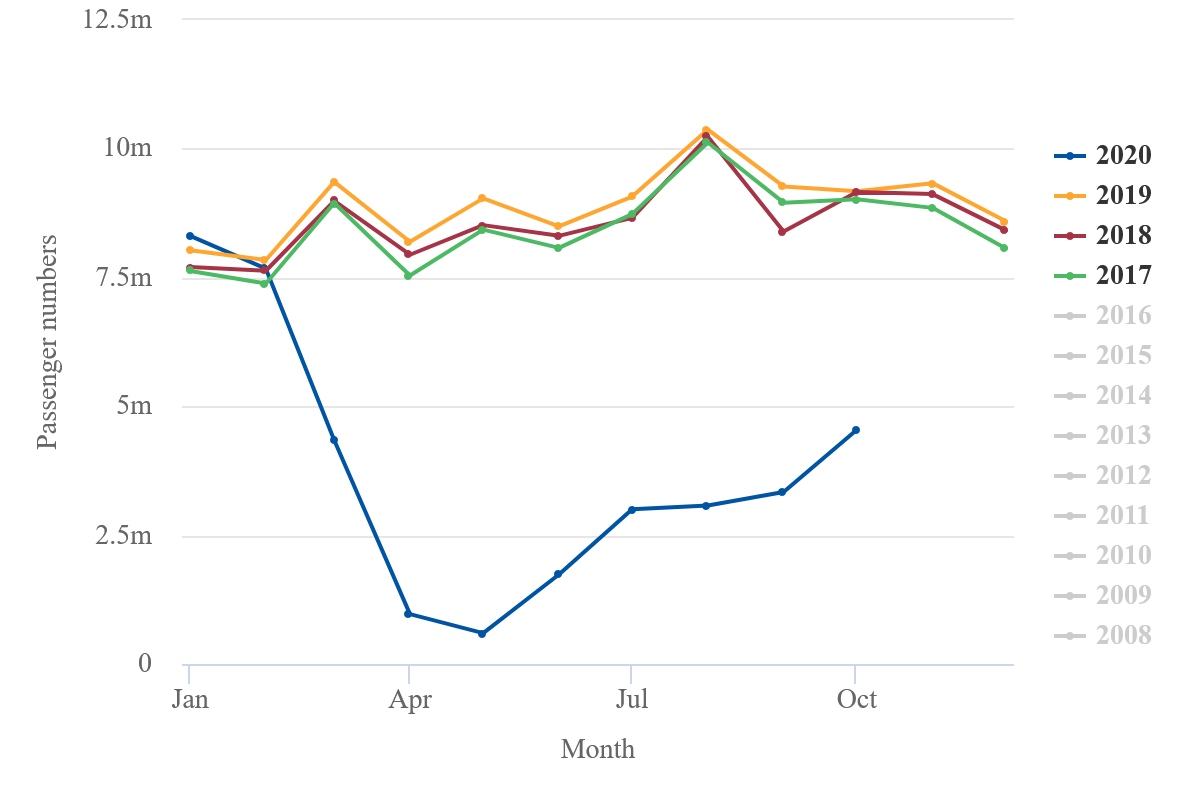 2021 begins with a new state of emergency

All eyes are now on 2021, and to what extent traffic will rebound towards normal levels.

The year has got off to a bad start in terms of travel thanks to the spike in coronavirus cases, which is putting pressure on hospital capacity. This led the government to declare a state of emergency for Tokyo and surrounding areas on 7-Jan-2021, extending to 7-Feb-2021. This has since been expanded to other prefectures.

Under the state of emergency, restaurants and bars are asked to close by 8 p.m., and people are urged to stay home as much as possible – particularly after 8 p.m.

These measures are still less stringent than those imposed in a previous state of emergency in Apr-2020. Japan’s COVID-19 vaccination program is expected to begin in late Feb-2021 at the earliest, with health workers set to receive it in the first phase, followed by those in higher-risk categories.

The next chart gives an illustration of the rollercoaster ride Japan’s domestic airline capacity has been on over the past year.

However, this was reversed in early Aug-2020 when a second wave of infections emerged in Tokyo and travel restrictions were put in place. Another gradual recovery began, ramping up in December.

Domestic capacity dropped significantly again in early Jan-2021. The decline was partly seasonal following the holiday period, but also because of the latest wave of cases and related airline decisions to scale back domestic flight plans.

Domestic weekly seat numbers have dropped close to the low levels seen in Apr-2020 and May-2020. 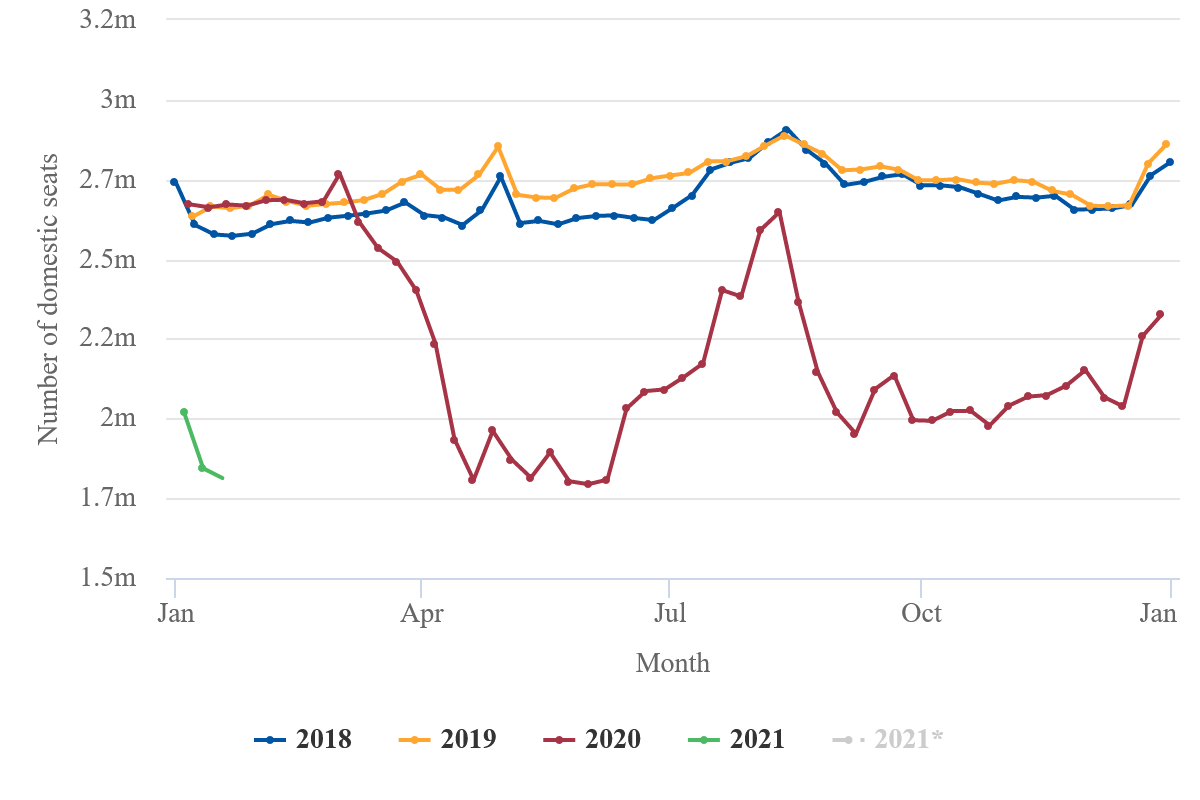 As recently as early Nov-2020 Japan’s two major airlines appeared to be on track to continue the robust recovery in their domestic networks.

However, these estimates have been progressively reduced as the latest spike has worsened. Much more significant cuts were announced following the declaration of a state of emergency.

Holiday traffic was subdued for both airlines. JAL reported that domestic reservations for the holiday period were down by 52% from the previous year, with available seats down 11.3%. After the holidays, ANA said it had carried 58% fewer domestic passengers during that period.

The two airlines reported that load factors were down to about 40% – a drop of 30-40 percentage points.

In its latest update JAL said that it would operate just 53% of its normal domestic schedule from 19-Jan-2021 to 31-Jan-2021, which is a dramatic drop from its estimates a month earlier.

This means an operational rate of 59% for the full month of Jan-2021, and JAL estimates that it will drop further, to 52%, for Feb-2021. Most of the additional flight cutbacks are into and out of Tokyo Haneda Airport.

All Nippon Airways has taken similar measures. On 11-Jan-2021 the airline cut back its domestic flight plans to 56% of normal levels for the second half of Jan-2021, and 66% for the full month.

International operations in Japan remain at much lower levels than domestic, and overseas services have been very slow to return.

Japan’s international seat capacity – including overseas airlines – is at 16% of levels from a year earlier, according to data from CAPA and OAG. International passenger volume carried by Japanese airlines has been down 96-97% in every month from Apr-2020 to Oct-2020, MLIT data shows.

Japan international capacity (all airlines), as measured in weekly seats 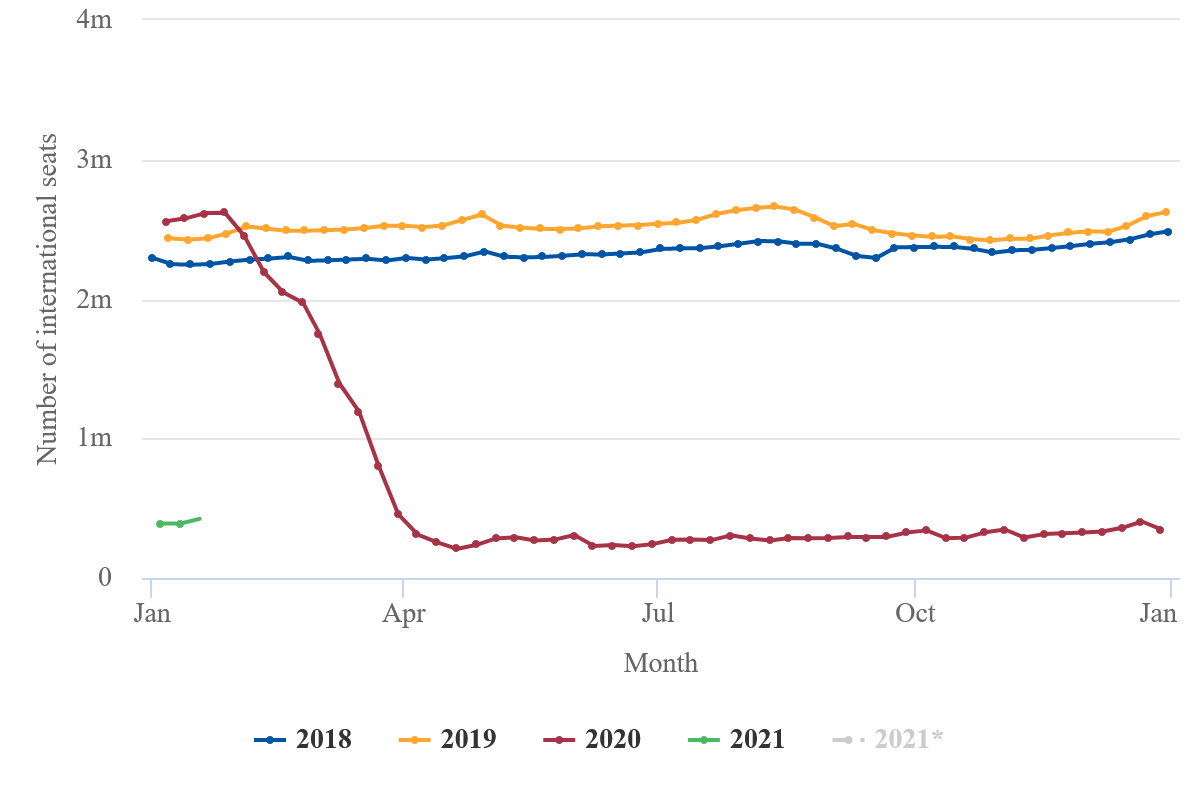 International demand will come under further pressure due to additional restrictions introduced in Jan-2021 in response to the worsening COVID situation.

Most non-Japanese residents were already not allowed to enter the country, and now the government is also suspending arrangements that had allowed business travellers to enter from certain other Asia-Pacific countries. The business travel exemptions will be put on hold until 7-Feb-2021.

The state of emergency has cast new doubts over the prospects of the Tokyo Olympics occurring this year. The government is still determined to proceed with the event, although the logistical challenges have been multiplied by the pandemic. Even if it does go ahead, there will not be the massive influx of foreign visitors the travel industry was hoping for. Televised events could still help raise the profile of the country with future tourists, but not to the same extent.

Airline plans dissolve quickly in the face of COVID-19 spikes

At the end of 2020 it would have been reasonable to conclude that 2021 was going to be much better for Japanese airlines, and that a strong domestic recovery would provide a cushion until international travel returns.

But such hopes have already been dampened in the first few weeks of the new year. This underlines the difficulties that airlines face in doing any kind of planning – the pandemic can roar back with little warning and undermine any demand assumptions. This means that airlines are forced to be reactive rather than proactive with their business decisions.

Increasing clarity over the timelines for vaccine roll-outs means there is hope on the horizon for the travel and airline industries. However, until mass immunity is achieved there will still be more financial pain ahead for these sectors.