LATAM’s exit from oneworld: another hit for alliance relevance

The proposed multi-layered agreement between LATAM Airlines Group and Delta Air Lines will have reverberations throughout the airline industry for years to come. LATAM’s swift decision to exit the oneworld alliance has interesting and possibly far-reaching implications.

The airline group is one of the largest members of the alliance, and once it severs long-standing ties with oneworld, the alliance will be dominated by American and IAG, joined by other, smaller, airlines that remain in the grouping.

LATAM’s defection from oneworld raises bigger questions about the value of alliances, since achieving network strength increasingly calls for looking outside traditional groupings.

Of course, in LATAM’s case there is a sizeable investment by Delta that allows Latin America’s largest airline group to strengthen its balance sheet further.

LAN joined the oneworld alliance in 1999, and after it merged with TAM the merged company remained in oneworld after TAM left the Star Alliance in 2014 - despite strong exhortations from Star (and SkyTeam) for the combination to become their partners.

LATAM is the largest airline group in Latin America and data from CAPA and OAG show that LATAM is oneworld’s second largest airline measured by seat deployment, with a nearly 14% share.

Seat share among oneworld members, as of early Dec-2019 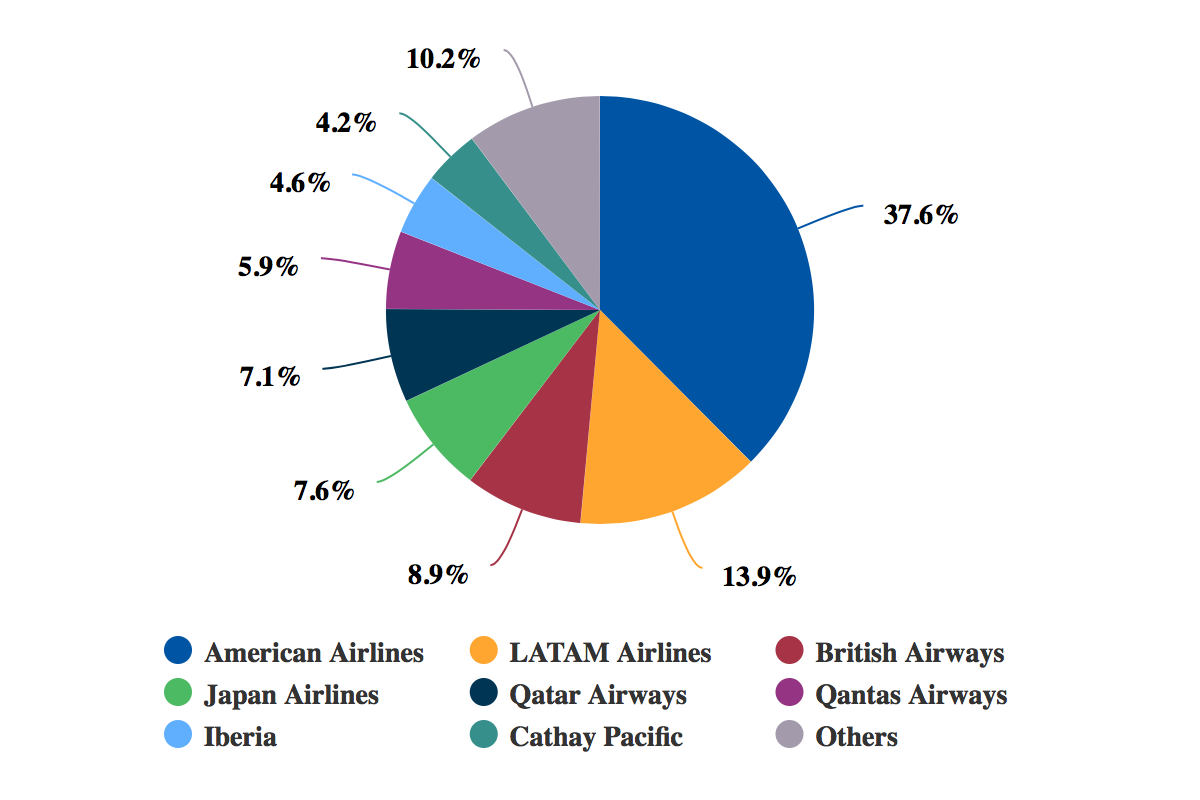 Once LATAM leaves the group, its largest members based on seat deployment will include members of oneworld’s immunised trans Atlantic JV – American and the IAG operators BA and Iberia.

That is the situation across the board for the large alliance groupings: the JV partners United and Lufthansa are the largest airlines in Star, and Delta and its JV partner Air France are the first and third largest airlines of SkyTeam (measured by seats).

Obviously the alliances would argue that the benefits for all members are not dependent on size, and perhaps there is some credence to smaller airlines benefiting from codesharing and forging reciprocal frequent flyer agreements with larger airlines in those groups.

But there is also a certain attractiveness to remaining independent, especially for airlines which compete domestically a dominant airline that belongs to one of the alliances.

Speaking at the recent CAPA Canada Summit, WestJet VP of Network and Alliances Brian Znotins said that Canada’s second largest airline does not want to be limited by a particular alliance. Mr Znotins, who has previously worked at United and Continental, had concluded from his own experience that the dynamics of alliances include “30 airlines sitting around a table, but are not able to agree on anything”, and immunised JVs “sprung from that”.

WestJet is in the process of forming a JV with Delta, and the Canadian airline has stated that it feels no pressure to join SkyTeam, of which Delta is founding member.

The LATAM and Delta partnership and their proposed JV occurred after LATAM’s proposed JV with American had been rejected by a Chilean court, which cited anti-competitive concerns about the combined market concentration of those two airlines.

LATAM gains a degree of financial fitness through the Delta deal

Even as LATAM’s decision to leave oneworld seems abrupt, the reality is that the deal it forged with Delta will produce numerous long term benefits, both financially and operationally.

The well documented agreement includes Delta’s pledge to take a 20% stake in LATAM for USD1.9 billion and a commitment to invest USD350 million in support of creating the partnership. Delta has also agreed to purchase four Airbus A350 widebodies in operation at LATAM and will assume LATAM’s commitment to purchase 10 of those widebody jets. The two airlines are also pursuing their own JV covering services between the US and Latin America, and points beyond.

LATAM executives recently stated that the transaction would reduce the company’s forecast debt by more than USD2 billion by 2025 and improve the company’s capital structure. As previously reported by CAPA, the reduction in debt will help LATAM further improve its leverage ratio: its leverage has fallen from 5.8x in 2015 to 4.3X in 2018.

The financial benefits for LATAM give the company a certain level of security. LATAM executives have also judged that the airline's employees would benefit from aligning with Delta, which is “one of the premier carriers in the world”.

Behind the scenes, American's position on LATAM’s abandonment is unrevealed at this point, but publicly American is downplaying the end of their relationship, stressing that their codesharing partnership produced less than USD20 million in annual incremental revenue.

Oneworld’s 34% seat share in Brazil will be essentially wiped out.

Brazil's seat share by alliance, as of early Dec-2019 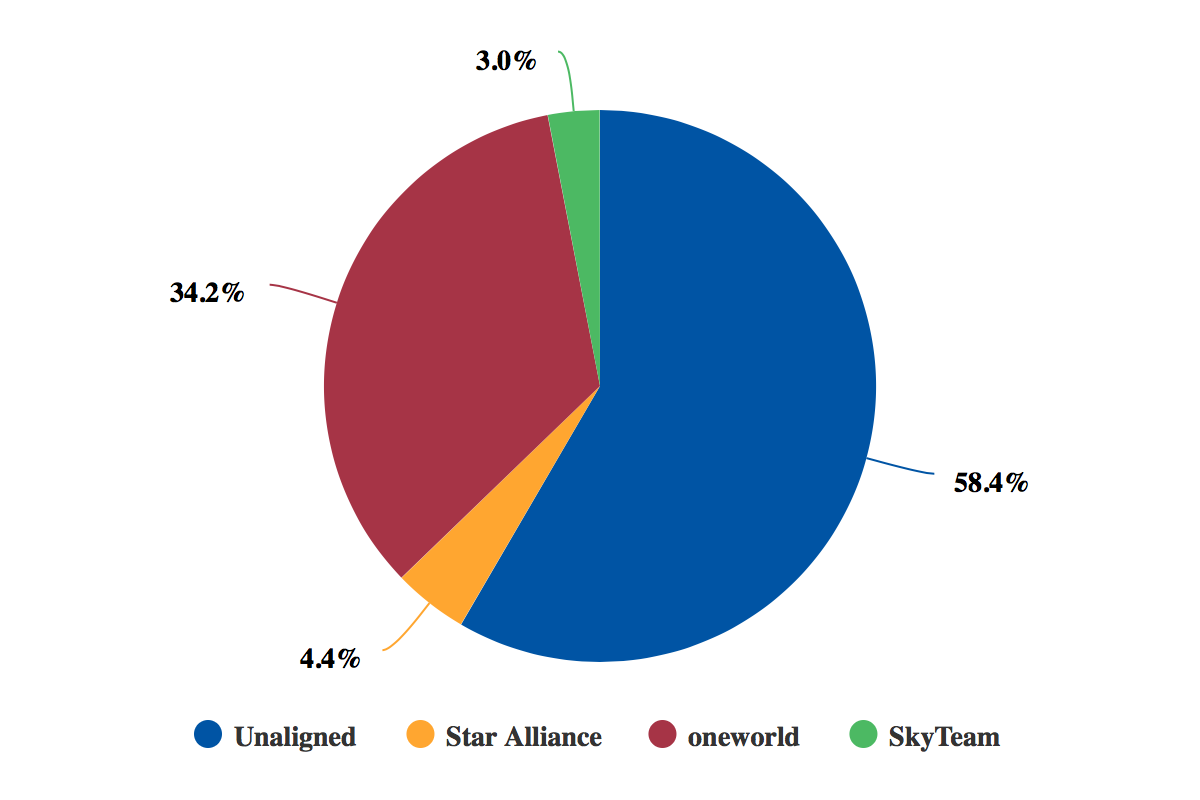 LATAM is the leading airline group in Chile and the second largest operator in Colombia and Argentina. According to CAPA and OAG, LATAM Airline Group’s combined seat share in upper and lower South America was 65.7% as of early Dec-2019, and in Oct-2020 all of those seats will officially become unaligned.

The dynamics of the three large global alliances have been changing for some time and in many ways led by Delta, which began taking equity stakes in independent airlines back in 2013 (when it took a stake in Virgin Atlantic) and has subsequently been opportunistic in taking stakes in other airlines, including GOL.

That relationship is ending now that Delta has formed a bond with LATAM.

Delta, a founding member of the SkyTeam alliance, has been a trail blazer in forging ties outside the alliance boundaries and has not been shy in discussing the limitations of alliances, which at just over two decades old may have reached the end of their useful life. As CEO Ed Bastian said when announcing the new partnership, "...we are not going to sit around and wait for the alliances to develop their technologies. We're working with them. But it's also important that Delta take control of our customer experiences into our own hands as best we can. So we're building on a bilateral basis…”

LATAM appears to feel no remorse in ending its long relationship with oneworld, deciding to start a new chapter in its history with Delta.

The shift is a sign of the times, and shows that alliance loyalty only stretches so far.

For oneworld, it means losing its anchor airline in Latin America, a promising and growing market, and the alliance really has no alternative avenues to pursue. Though many, if not most of LATAM's existing codeshares will continue at least in the short term, the longer term will erode their value if Delta sees them as competitive.