Las Vegas is among the fastest growing cities in North America, but McCarran International Airport has witnessed among the most severe downturns in passenger traffic of major US airports over the past 12 months. That downward trend bottomed out at the beginning of the year, and has now is firmly moving back towards growth. US consumer confidence appears to be returning and the punters are heading back to the Strip.

McCarran's Apr-2009 traffic statistics show passenger numbers declined 5.9% year-on-year during the month, to 3.6 million, the smallest fall since May-2008. Traffic for the four months to Apr-2009 traffic was down 12% year-on-year. Traffic growth could return to positive territory next month (albeit off a smaller base in May last year when traffic was down over 4% on May-2007). 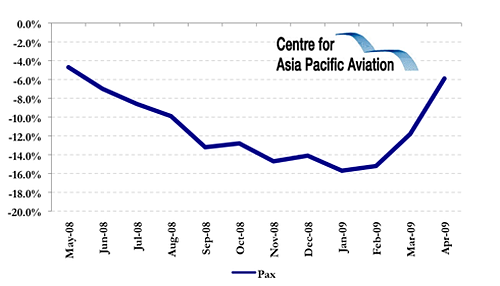 Most US domestic carriers operating at the airport cut capacity in late 2008, although there were relatively few outright route suspensions. Southwest Airlines, the largest carrier at McCarran, estimated in Dec-2008 that most carriers would cut back seat numbers by 15-20% at the airport over 2009. Spirit, United Airlines and US Airways all announced frequency reductions, while Delta Air Lines confirmed that it would eventually be replacing Northwest Airlines at the airport (adding CRJ-700 shuttle services to replace larger A320 operations). 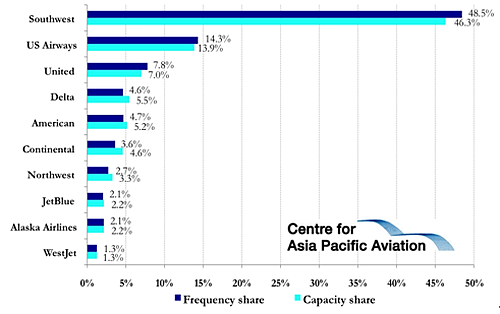 Week commencing: 25-May-2009
Source: Centre for Asia Pacific Aviation & OAG
*NOTE: OAG data does not include Allegiant Airlines, which is the sixth largest carrier at Las Vegas by capacity

The exception to the cutbacks was home carrier, Allegiant Airlines (which does not figure in the OAG schedules). Allegiant has been remarkably successful with its integrated holiday package approach and focus on ancillary revenues. While the carrier did reduce capacity at McCarran in 2H2008, it started 2009 with a fresh wave of new routes and frequencies, and has grown its passenger traffic at the airport by 21% for the year to Apr-2009. 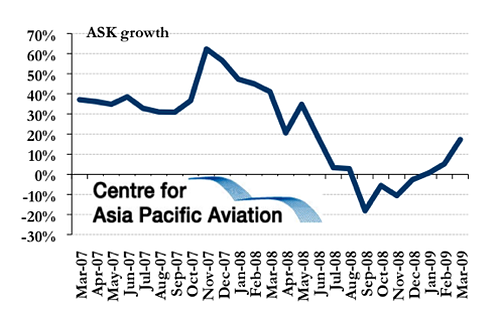 Another carrier bucking the trend is Virgin America, which has increased its Las Vegas passenger traffic by 45% over the past four months, admittedly off a small base. It has boosted capacity on its routes to the airport from San Francisco and New York. 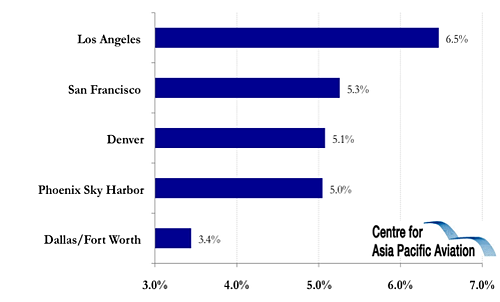 International demand is also looking up. British Airways this month announced plans to launch non-stop daily service between Heathrow and Las Vegas McCarran International Airport in late Oct-2009, ostensibly to support the growing number of traders deserting the City in favour of the Strip in search of better returns.