LAN up despite fall in net income for 3Q2009; American Airlines tumbles

The AMEX Airline Index fell 2.4% on Monday, as the majority of North and South American carriers' stocks tumbled, as the Dow dropped 1.1% due to losses in the financial sector. Oil prices also fell, down 2.3%, to USD78.68.

American Airlines' (-7.0%) stock fell on reports the carrier may have to give up some of its landing and take off slots to allow for EU approval of its proposed alliance with British Airways and Iberia. The oneworld alliance carriers have applied for anti-trust immunity in Europe and the US to allow them to coordinate fares and schedules.

According to various media reports, the European Commission is likely to find that the planned trans-Atlantic cooperative business agreement between the carriers would result in “appreciable competitive harm” on seven routes between the EU and the US. The EC is expected to find that the agreement breaches European competition rules, unless its concerns are addressed.

Routes of concern reportedly include services from London to New York, Dallas, Boston, Miami and Chicago and Madrid-Miami and Madrid-Chicago routes. Remedies could include the transfer of take-off and landing slots to other carriers. The US Department of Transportation is due to announce its preliminary decision on the anti-trust application by 31-Oct-2009.

Air Canada (+0.7%) CEO, Calin Rovinescu meanwhile stated during trading that the carrier’s passengers will gain access to 77 new destinations when Continental Airlines becomes a member of the Star Alliance on 27-Oct-2009.

Mr Rovinescu stated Continental’s entry into the alliance would provide increased revenue for the carrier, but stated he was unable to forecast how much. Continental has forecast it will generate USD100 million more in revenue from its membership in the Star Alliance than it did in SkyTeam.

The carrier also hopes to see increased traffic on services to the US, with the launch of a separate codeshare deal on Atlantic services between the two, commencing in 2010. 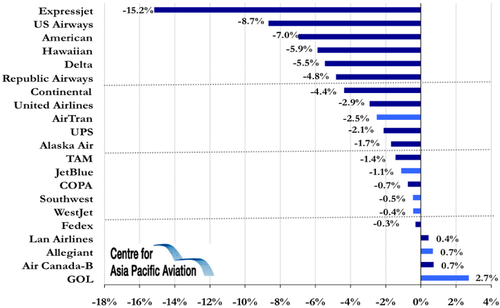