The proposed merger between Latin America’s two main network airlines, LAN and TAM, will set in train another scramble between their respective alliances, oneworld and Star Alliance – much in the same way as occurred when it appeared that Japan Airlines might defect from oneworld to Star following the Japanese flag carrier’s bankruptcy in Jan-2010.

The two airlines, which dominate Latin American aviation, are each key elements of the global groups’ alliance strategies for the continent. Any dilution of the airlines’ effectiveness as members will have an immediate flow on to other members’ interests and to the effectiveness of the groups overall. There are hundreds of millions of dollars at stake, when measured in access to almost the entire South American market.

A confusion of Frequent Flyer Programmes

At present neither airline is offering any hints about its alliance intentions; indeed the massively important merger announcement caught almost everyone by surprise. Both proudly state their participation in their two groups, but also advertise that “Frequent flyer programme members would be able to earn and redeem miles on more flights, and be able to earn miles through more partners than ever before.” And, “the combined carrier would allow for seamless travel throughout the region and beyond”, each clearly implying a combined FFP.

But it is near-inconceivable that a multilateral FFP involving (or not) both alliances could operate without being highly confusing to travellers. It is one thing for airlines to have bilateral FFP agreements which offer reciprocity between the two airlines’ programmes. Blanket reciprocity between Star and oneworld FFPs – along with a comparable array of interline agreements and marketing and sales arrangements – would however cross so many boundaries of tolerance for the alliances that it would effectively make a mockery of their roles.

LATAM a powerful programme – but no word about the alliance crossover 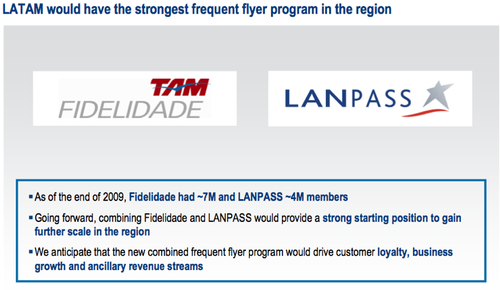 A merger like Air France-KLM, with umbrella holding company

The merger proposed is broadly similar to the highly successful Air France-KLM merger which operates under a holding company. In the case of LAN and TAM, the company will be LATAM Airlines Group SA (LATAM). LATAM wiil “serve as a parent company that will align activities for all group holdings.” Each airline will continue to operate as independent company within the group, retaining branding, separate headquarters and governance structures.

All of this sounds to have been worked out using the Air France-KLM model as a precedent. The big difference however in the case of the two European flag carriers, is that they necessarily belong to the same alliance, in their case SkyTeam.

For Air France-KLM, even with their separate brands, route rationalisation has been an important part of the merger process. But with both of those airlines in SkyTeam, travellers have not seen disadvantages in mixing and matching itineraries. Unless the existing rules are changed, regular travellers to or within the region would be faced with the choice of a primary alliance allegiance and then secondary complex patterns of accruing and redeeming mileage. For instance, would a Star Gold member of TAM receive preferential treatment when flying oneworld’s LAN?

And LAN, as driver of the deal, to decide the future?

The merger is in fact an acquisition of TAM by LAN for USD3.7 billion. So, while the form of the individual airlines remains separate for international regulatory reasons, the driver of this operation is LAN, a gem in the crown of the oneworld group.

So the prospects of the existing alliance relationships being maintained rest largely in Santiago. That is where the key decisions will be made. But merely dumping Star is not a decision to be taken lightly. TAM has many valuable linkages throughout the Star grouping; and they could not so easily be reconstituted on a bilateral basis without the alliance framework behind them.

There may also be anti-trust implications for LATAM, with the near-monopolistic position in so many major markets that the combination would hold. So, for example, concerned US or European airlines which felt they were being excluded might well move to block such moves, leading to compromises being imposed. The extra-territorial reach of the European and American laws is substantial and sometimes surprising.

Cathay-Air China partnership not a model?

There have in the past been some crossovers in alliance interests, where the combined parties have stayed put in their original groups, but none on the scale of the one now proposed in Latin America.

One example of airlines combining – in this case also across oneworld and Star borders - is that of Air China and Cathay Pacific, also in an enormously important market. There a minority cross-shareholding exists, but the arrangement is far from a merger. It does appear to be a non-permanent status of convenience for each side and, given the sensitivities and potential importance of the China market (and the likely impenetrability of the deal), it must be that neither alliance has wished to rock the boat.

That example therefore offers little in the way of guidance for what happens next in South America.

Alliances in a changing world – compromise or win-lose?

The global alliances have done much to reshape world aviation, providing a “poor man’s virtual merger”, where archaic cross border merger rules prevent closer combinations. In doing so, each attempts, to varying extents, to capture the respective airline for their grouping – both to add to the alliance’s marketing clout and to prevent them from joining competitors.

Star in particular has stringent rules about withdrawal that make it a costly exercise to attempt to switch or leave. Whether a merger of this sort provides a legal exclusion from punishment for withdrawal is not clear. Lawyers for all concerned will be beavering away feverishly to establish the implications and how best to deal with them – including perhaps intervention to oppose such a major tie-up.

Nonetheless, the real decisions may be more strategic than legal. Despite the unwelcome novelty of this situation for oneworld and Star, the stakes are very high, with the rapidly expanding Latin American market as the prize. This is really a case of winner takes all, as there is no other airline which comes close to the power of these two, either individually or, let alone combined.

It may still be that the global groupings will on this occasion therefore be prepared to make compromises that were not previously conceivable, rather than lose out entirely.

Neither alliance would feel comfortable with a permanent hybrid arrangement, straddling the two. This would be difficult both in its immediate implementation and in the risk that it creates an unhappy precedent for future scenarios. Yet the alternative, for one or the other, could be to lose out entirely on group access to south American markets, at least in the short term.

Whatever the case, there will be frantic activity at oneworld and Star headquarters this week, as they rush to decipher the implications of this merger. And maybe even SkyTeam; who knows, when all the balls are up in the air, anything can happen. The LAN-TAM combination would be the biggest trophy to be had in today’s world alliances; the team would have a lot of negotiating power.

With El Dorado as the goal, all will be hoping too that the rewards will not be mythical, as they were in the waves that consumed explorers up the Amazon for hundreds of years. Hopefully it will not just be the lawyers who find the pots of gold.