LAN and TAM move ahead on consolidation

South American carriers LAN and TAM moved closer to the merger that was first revealed in an MoU signed last August. In the most recent development on 18-Jan-2011, both boards approved the binding documents and will recommend shareholder approval.

The agreement involves restructuring and an exchange offer that will be presented to all TAM stockholders with the exception of controlling shares held by the Amaro family. Assuming all other shares are surrendered, the new organisational structure will resemble this diagram, released jointly by the companies. 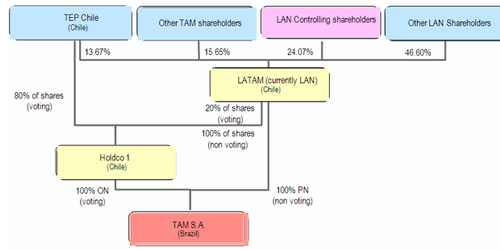 Non-voting TAM stock held by the Amaro family will move to yet another newly established Chilean corporation, Sister Holdco. Simultaneously, Holdco 1 will incorporate Holdco , which will offer holders of TAM stock, other than the Amaro family, a one-to-one exchange for the TAM shares.

Once the exchange is completed, Holdco 2 and Sister Holdco will be merged with LAN, the surviving entity. The shares of these two companies will both be exchanged for 0.9 shares of LAN stock, whose sole assets will be the Amaro family’s TAM shares acquired in the exchange.

The agreement is dependent on approvals and actions of both shareholders and regulators. Upon completion, TAM shares will be delisted on the Brazilian exchange and replaced by LAN, with the stock continuing to be listed in Chile and on the New York Stock Exchange.

LAN’s name will be changed to LATAM Airlines Group SA with the share capital distributed as shown in the above diagram.

Once completed, LAN, TAM and their subsidiaries will continue their operations as at present with the following officers on the new LATAM board:

It is expected the full transaction will require not more than nine months and create an airline group that will be among the world’s 10 largest. The combined entity will operate to 115 destinations in 23 countries with upwards of 280 aircraft and 40,000 employees.

While the press release affirmed the intent of the united group to operate as separate brands, there was no mention of a change in alliance affiliation for either carrier. Presently LAN is a member of oneworld and TAM is tied to Star, giving each alliance roughly equal exposure in South America. Any realignment would significantly alter that balance and make one or the other an overwhelming force on the continent. 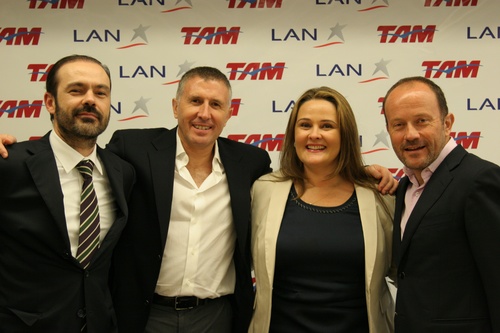