LAN Airlines (-0.1%) COO, Ignacio Cueto stated during trading that the carrier is currently looking for potential acquisitions or merger partners, to expand its presence in Latin America. Mr Cueto stated LAN is currently “window shopping”, but there is nothing concrete as yet.

The Cueto family, which currently runs LAN through an agreement with investor, Sebastian Pinera, also stated they may purchase some of Mr Pinera’s stake in the carrier if he is elected Chilean President in Dec-2009.

ExpressJet’s (+7.5%) stock price continued to grow on the back of news the day prior that they have signed a deal with United Airlines (-0.4%) to operate 22 ERJ-145 aircraft under the United Express brand. Under the deal, United will also receive warrants for 2.7 million of the carrier’s shares.

According to the analysts, “cool efficiencies” should allow ExpressJet to be profitable by 2Q2010. Avondale expects the carrier to report a loss of USD1.72 a share for 2009, but a profit of USD0.47 a share for 2010.

United intends to use the net proceeds to repay at par all of the USD493 million aggregate principal amount of the equipment notes related to its outstanding 2000-2 EETC, and will use the approximately USD290 million of remaining net proceeds, after accounting for all transaction-related fees and expenses, for general corporate purposes.

Meanwhile, Hawaiian Airlines (-2.3%) saw the largest fall in stock prices for the day, as the carrier’s negotiations with its pilots continue to stall. The National Mediation Board advised the carrier and its pilots on Monday that it will not act on the pilots request to declare a mediation impasse until mediation talks with Hawaiian are completed on 07-Dec-2009.

US carriers are currently increasing their fare surcharges for Spring 2010 and Summer 2010 schedules:

According to Bestfares.com CEO, Tom Parsons, “the number of seats they've [US carriers] cut is allowing them to do crazy things," and that passengers should expect fares and/or surcharges to increase again next year, marking the end of fare cuts. 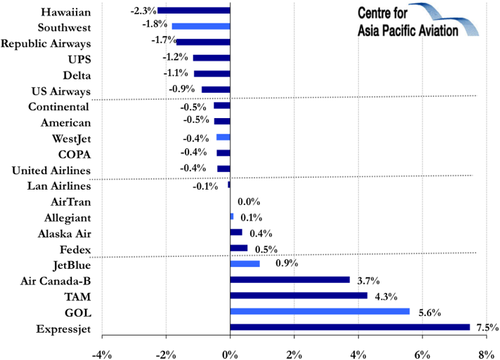