LAN Airlines (+2.1%) gained on Tuesday (02-Nov-2010) after Fitch Ratings viewed LAN's recent announcement that the company has reached an agreement to acquire 98.942% of the outstanding shares of Colombian airline AIRES, through the purchase of its parent entities, as neutral to LAN's credit quality.

Fitch stated: "The transaction is not expected to materially change LAN's capital structure and liquidity position over the near term. Strategically, Fitch views the purchase agreement positively as it reflects LAN's consistent business strategy to expand and diversify its operations in the Colombian domestic market, which has become a significant component in the regional market. With this transaction, LAN would become the second largest operator in the Colombian domestic market with 22% market share. In addition, this acquisition would allow LAN to consolidate its presence in the Colombian international market. Combined LAN and AIRES' market participation in the Colombian international market would be close to 10%. Additionally, the transaction would result in synergies with LAN's cargo operations in the region."

Air Canada and WestJet to report 3Q2010 results this week

Air Canada (+0.5%) also made a minor gain, while WestJet (-0.1%) slipped ahead of reporting their 3Q2010 financial results this week. Raymond James analyst Steve Hansen stated the company does not expect WestJet’s stock to “appreciate significantly until the economic outlook improves or the airline scales back its fleet plan” and its 3Q2010 “may disappoint”. As a result, Mr Hansen last month downgraded Raymond James’ rating of the carrier to "market perform" with a USD12.755 price target.

On the other hand, Air Canada has stated it expects to increase overall capacity by up to 7.5%. Raymond James has a "outperform" rating on the carrier. 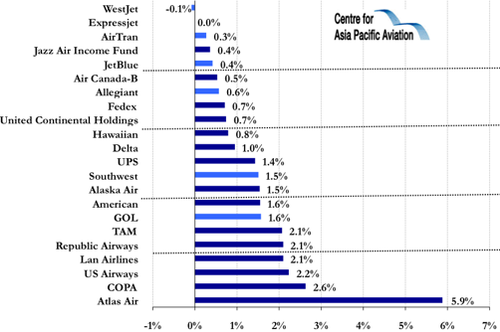