Korea's LCC sector ended 2016 with 103 aircraft – the first time the collective fleet had crossed the 100 mark for what, until recently, was Northeast Asia's most dynamic market. Korea has six LCCs, with Jeju Air regaining a strong lead as the largest LCC. Half of Korea's LCC fleet has been added in the last three years. It is Northeast Asia's largest LCC market after China and, surprisingly, well ahead of Japan.

And it is unclear how much further Korea's LCCs can grow in the short term. They have mostly flown domestically, and slots are now constrained. International opportunities are also challenging, and further complicated by the Jan-2017 decision of China to reject charter applications during the popular – and very profitable – Chinese New Year. Korea's LCCs needed liberalisation, not antagonism.

Korea has 91% more aircraft than Japan, which has 54 aircraft at the LCCs that have launched from 2012 onwards (thus excluding the "new entrant" airlines of the 1990s, such as Skymark). Unless there is a rapid change in the market, it may take until next decade for Japan's LCC sector to become larger than Korea's. Jetstar Japan will add only eight aircraft over three years, while in Nov-2016 Peach placed an order for 13 A320s for delivery from mid-2018.

It is difficult to categorise Chinese LCCs, since a number of airlines have announced they are LCCs or are converting to LCCs but do not yet display significantly different characteristics. CAPA's count of 174 LCC aircraft in mainland China comprises Spring (66), Lucky Air (39), China United (33), West Air (27) and 9 Air (9). Other LCCs that may be more distinctly LCC in coming years include Capital Airlines (69 aircraft), Chengdu Airlines (27) and Urumqi Air (9).

Japan is arguably the most supportive but still has unnecessary regulations that do not improve safety but in fact reduce efficiency. Korea, despite having Asia's fourth largest LCC sector and a small domestic market, has experienced LCC growth more by accident than design; Korea is still to formulate a policy for LCCs. 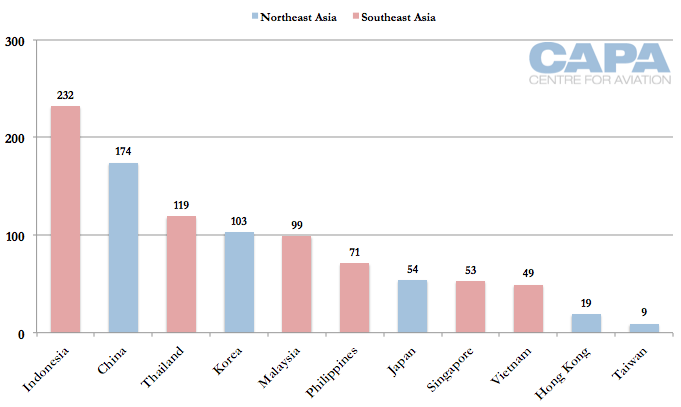 Only three of East Asia's 10 largest LCCs are from Northeast Asia. All three are from mainland China: Spring Airlines, China United and Lucky Air. With the exception of Spring, they are mostly domestic operators. 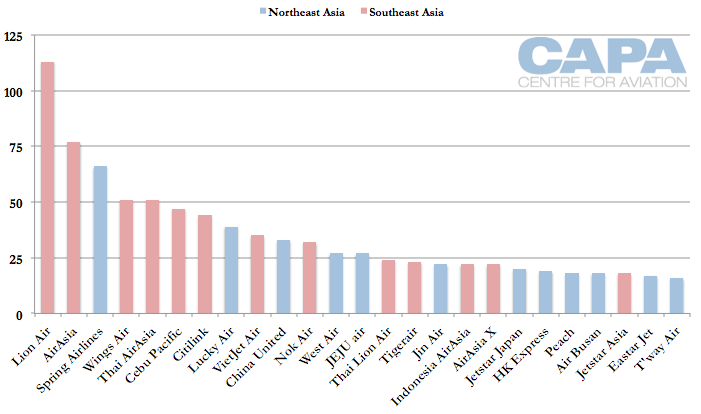 At the end of 2016 Jeju Air widened its lead over Jin Air as Korea's largest LCC. Jeju Air is independently owned; the second and third largest, Jin Air and Air Busan, are respectively owned by Korean Air and Asiana.

After a number of years of the airlines' being close in size, Korea is diverging, with Jeju Air the largest, followed at a modest distance by Jin Air, and then three LCCs: Air Busan, Eastar Jet and T'way. Air Seoul, which only launched in 2016, is the smallest by far (three aircraft in 2016).

Air Seoul potentially has an advantage since Asiana will pass the LCC routes and slots. The risk, however, is that Air Seoul receives Asiana's hand-me-down routes that have limited financial viability, and that Air Seoul is not allowed to pursue its own growth. 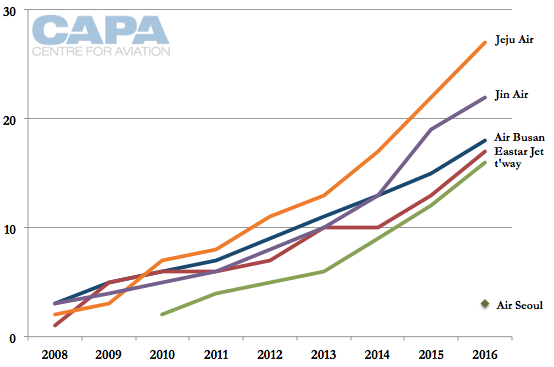 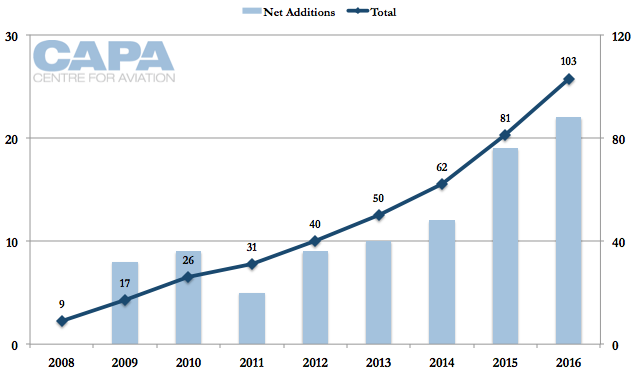 It is unclear how much further Korea's LCC sector can grow in the short term. Korea's LCCs have mostly operated in the domestic market. Korea's domestic market comprises almost exclusively services to and from Jeju – the island that is not linked by the high-speed rail system that efficiently covers Korea and all but eliminates the need for domestic flights within the Korean peninsula. Jeju airport has very few slots left.

Internationally Seoul Incheon is constrained at peak times, while Busan is also running out of slots.

Korea's LCCs are exploring smaller Korean cities but it is unclear how sustainable demand can be.

Slots at other airports, such as Hong Kong, are also limited. Traffic rights hold back significant growth to Taiwan, which is severely underserved to Korea. Only parts of Southeast Asia are accessible due to range.

T'way may overcome range restrictions with its intent to acquire the 737-900ER, while Jin Air selectively deploys its 777-200ER to Phuket in addition to points outside Asia (Honolulu and Cairns). Jin Air remains Northeast Asia's only widebody LCC operator.

China has been the market that Korea's LCCs have been waiting on in order to ramp up growth. The opportunity presented by bilateral expansion, let alone liberalisation, is difficult to fully account for.

While Korea's LCC sector needs consolidation, the size of the China opportunity means a small Korean LCC that executes a sound China strategy could rise to the top of the sector. Korean carriers have routinely reached their bilateral maximum (only certain provinces are open skies). While Korean LCCs are in favour of open skies with China, Korean Air and Asiana are not, fearing they have more to lose than gain.

The China-Korea market has evolved over time. Korean LCCs were able to get around bilateral restrictions by offering "charter" flights that were effectively scheduled services. China imposed restrictions on how often charter flights could run.

In early Jan-2017 Korean LCCs faced another challenge as China refused charter applications, apparently a non-related tit-for-tat to Korea's placement of US military equipment. Although charters are a small part of the China-Korea market, not being able to offer them during the popular and high-yielding Chinese New Year period will have a financial impact on Korean carriers.

Impacts are already being felt outside the aviation sector as the market, fearing a decrease in inbound Chinese visitors, underwent a fall on stocks such as cosmetic companies – distributing products that Chinese tourists often purchase.

Uncertainty pervades much of the world in early 2017. It is no comfort to Korean LCCs that their saviour – expansion in China – appears to be drifting backwards.