Air France-KLM (+1.2%) rose with the majority of European airline shares on Wednesday (22-Dec-2010) after KLM and Malaysia Airlines announced they have signed an MoU to investigate closer links. The carriers plan to further strengthen their relationship which has been in place over the past 11 years. The aim is to offer greater connectivity, better schedules and more choice for their passengers. Malaysia Airlines and KLM operate daily Amsterdam-Kuala Lumpur flights.

Finnair (+1.0%) Head of Global Marketing Jarkko Konttinen stated the carrier is launching a new corporate identity in a bid to strengthen its position in the competitive Europe to Asia business market. The development is part of the carrier's long-term Vision 2020 plan. There will be no new seat design as the average age of Finnair aircraft and product is three years old, Mr Konttinen added. The new image will be rolled out from this month, with long-haul aircraft all carrying the new livery by the end of the year, and the short-haul fleet complete by 2013.

Lufthansa (+0.2%) made a marginal gain after announcing plans to invest EUR650 million to construct a satellite terminal at Munich Airport that would expand annual capacity by 11 million passengers. Terminal 2, to which the structure would be attached, is expected to reach a maximum capacity of 25 million passengers in 2011, meaning the extension would raise its capacity by 44%.

The airport will cover 60% of the project cost with Lufthansa to cover the remaining 40%. The new satellite building was designed as an expansion of the existing baggage sorting hall on the apron to the east of Terminal 2. According to the plans on the drawing board, the elongated satellite building will have two passenger levels and 52 gates.

Aegean Airlines (+4.7%) and Turkish Airlines (+4.0%) were the biggest gainers for Wednesday, with Turkish continuing to climb on news it plans to launch a new subsidiary in Cyprus. 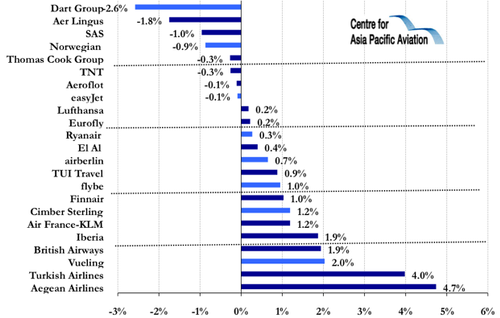