Shares in Kingfisher Airlines and Jet Airways bounced on Friday, helping them regain most of the ground lost earlier in the week, when the Indian Premium League announced plans to shift this year's Twenty:20 cricket fixtures to South Africa. The move will result in a significant loss of domestic sectors for the Indian carriers over the next few months.

Jet indicated it would remove some B737s from domestic services during the six-week event from mid next month, possibly redeploying them for charter services to/from South Africa (though a technical stop would be needed).

In other sporting news, Kingfisher-sponsored Force India enjoyed a rare F1 Grand Prix finish, coming in ninth and 12th at the first round in Melbourne yesterday. Kingfisher boss, Vijay Mallya, fired off a press release in response, stating it was "a very respectable effort for the first race of the season".

He added, "for a race car designed and built in 120 days and with only eight days of testing, we put up a good show through Adrian [Sutil] and [Giancarlo] Fisichella...The most important achievement was that we got 100% reliability, as both cars finished without any mechanical problems".

In more F1/aviation developments, Sir Richard Branson's Virgin Group has hinted at a possible buy-in to the new kid on the block in F1 - the Brawn GP team, which finished first and second in Melbourne. 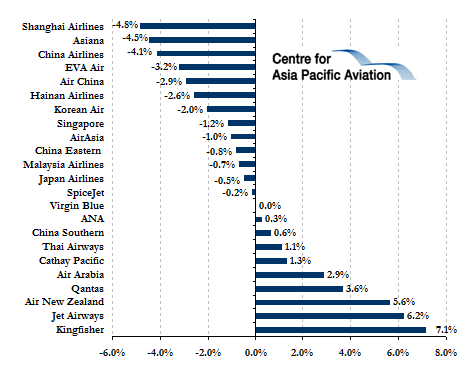