Every so often an unlikely small air transport hub appears somewhere. That happened in the Russian oblast of Kaliningrad 15 years ago, courtesy of the innovative airline KD-Avia, which sought to connect large swathes of Russia with Europe through Khrabrovo Airport. It did not last for long, as the airline succumbed to financial pressures.

Two years ago the Khrabrovo management examined recreating that hub with LCCs like Pobeda, but it didn’t work.

Now, mindful of St Petersburg Pulkovo Airport’s success at securing a seventh freedom operating environment there, Khrabrovo seeks to have one of its own, which could lead to self-connecting hub passengers growing by default.

An oblast which punches above its weight

Kaliningrad is an odd case, an Oblast (region) – technically a federal subject and semi-enclave of the Russian Federation – which occupies a strategic position (because its main port is the only Baltic one in the Federation to remain ice-free in the winter) away from the mainland. Kaliningrad is on the Baltic Sea, wedged between Lithuania and Poland, and has a population of approximately one million.

Early in the 21st century, the economy of Kaliningrad Oblast became one of the best performing economies in Russia. This was helped by a low manufacturing tax rate related to the Yantar Special Economic Zone, which is located inside the oblast.

Between 2016 and 2019 there was solid passenger traffic growth at Khrabrovo Airport, and although it has fallen back this year, as with many other Russian airports a decline of the sort experienced by most airports elsewhere has not occurred. 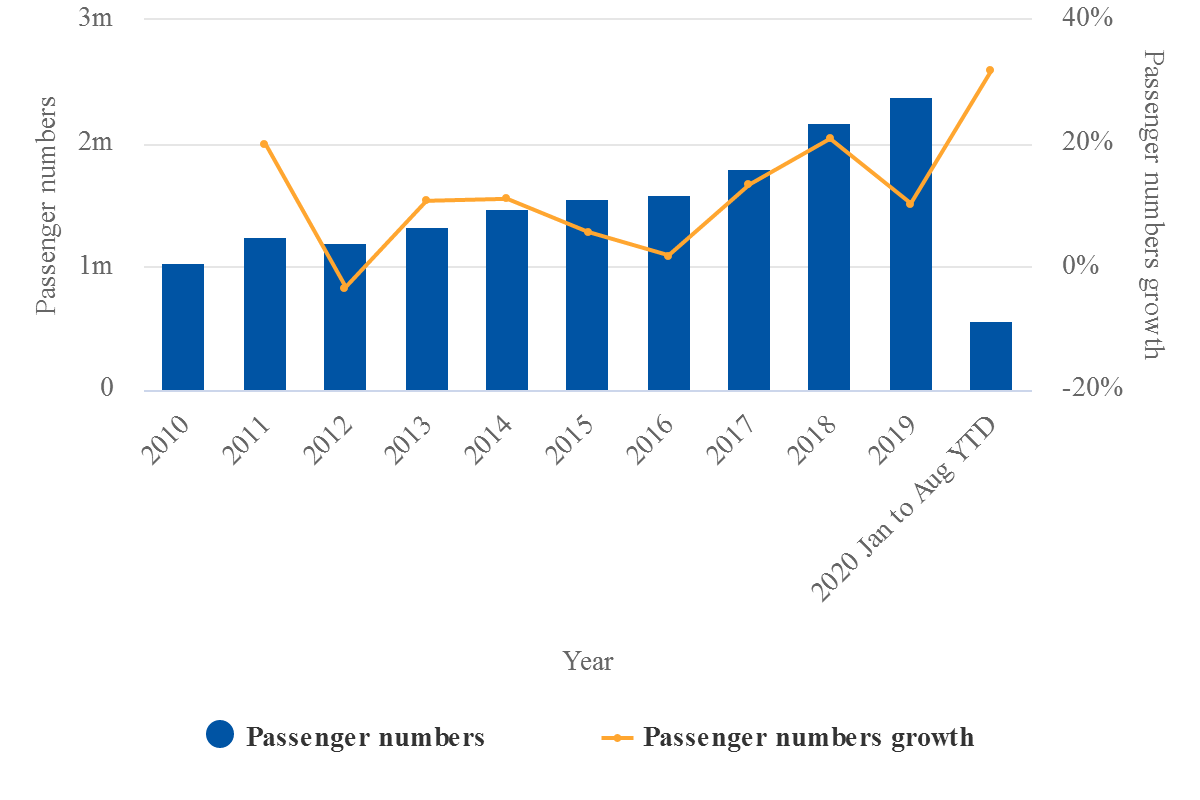 Indeed, Khrabrovo has been barely impacted by the pandemic at all.

In Jul-2016 the large Russian airport operator Novaport partially acquired Khrabrovo Airport from Aeroinvest, and as part of Russia's preparations to host the 2018 FIFA World Cup, a new terminal was put into operation. In addition, the airport infrastructure was modernised.

Analysis of current schedules data reveals that there are five main airlines, of which the largest two are Aeroflot and its LCC subsidiary Pobeda. 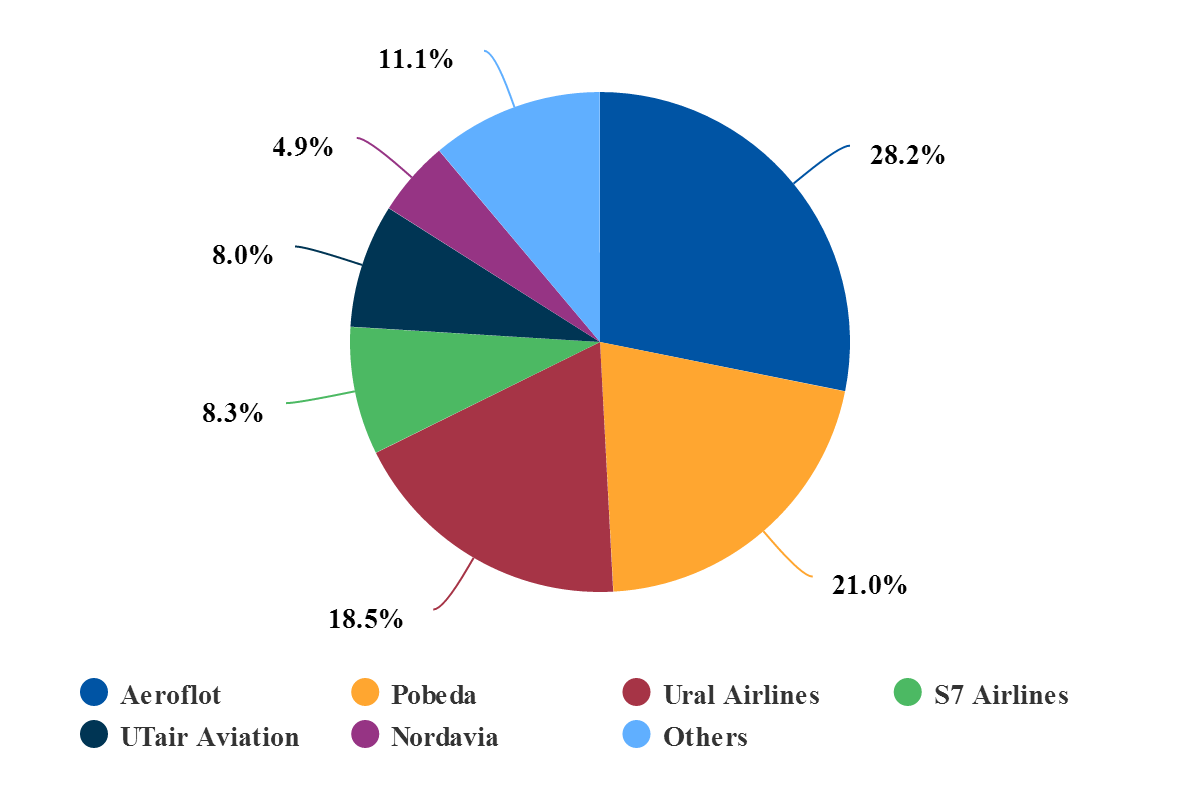 The Director-General, Mr Korytniy, said the airport is actively working on further development plans and is in discussions with many airlines, including the three main European LCCs: easyJet, Ryanair and the fast-expanding Wizz Air.

Mr Korytniy noted: "We see their interest in Khrabrovo. But they will come only once the airport receives Open Skies status with seventh freedom rights". Mr Korytniy said the airport could develop as a base for Russian and foreign airlines, while its technical capabilities allow the airport to offer LCC services.

The Seventh Freedom of the Air is one of the more recent ones arising out of the original handful agreed at the Chicago Convention in 1944, and in Europe has done so since European open skies were introduced in the early 1990s.

It is the right or privilege, in respect of scheduled international air services, granted by one state to another state, of transporting traffic between the territory of the granting state and any third state with no requirement to include on such operation any point in the territory of the recipient state, i.e. the service need not connect to, or be an extension of, any service to/from the home state of the airline.

To put it more simply: the seventh freedom permits an airline to operate ‘stand-alone’ services outside the territory of its own state, to carry passengers and freight between two foreign states.

Services would depend on the existence of a bilateral air services agreement between the relevant states, rather than on the nationality of the airline. All the above assuming that such routes were authorised by the authorities; there are always caveats with these sort of arrangements.

This concept is not new in Russia. In 2019 Pulkovo Airport, serving Russia’s second city, St Petersburg, applied for an airport-specific open skies agreement to be put in place, whereby fifth and sixth freedom rights would be observed.

That would mean, for example, if it applied globally, that an Asian airline such as ANA could operate from Tokyo to London via St Petersburg with traffic rights on all three sectors, or a Middle Eastern one such as Emirates (which is already a selective fifth freedom operator) could do the same between, say, Dubai and Chicago.

In the sixth freedom domain it would mean an airline(s) could base itself at St Petersburg and operate a hub and spoke system there between countries, again as Emirates does at Dubai, or, more appropriately, as nearby Helsinki Airport in Finland does.

However, what St Petersburg was ultimately offered, in Dec-2019, was seventh freedom status restricted to European airlines only, and this ‘halfway house’ was agreed by which foreign airlines would be allowed to introduce point-to-point services from 30 countries, in some cases from any city, and in others from selected ones only.

In detail, the Ministry of Transport – which is keen for there to be more foreign LCCs operating, particularly, as there is only one Russian one – approved 21 countries to operate seventh freedom rights services to Pulkovo Airport without any restrictions on airport point of origin, including Belgium, Denmark, Ireland, Switzerland and Portugal.

The nine remaining countries were approved to operate seventh freedom rights services to Pulkovo, with the following restrictions on points of departure or arrival:

Little take-up at Saint Petersburg so far, but can it be expected right now?

It is not easy to gauge the airline response in view of the pandemic, which set in soon afterwards. The route map below, as of the week commencing 05-Oct-2020, reveals only one service operating on any of those routes (Sofia), and no service at all from many countries.

In Sep-2020 Wizz Air postponed to Dec-2020 the launch of additional St Petersburg services that do include one of the designated cities, namely Sofia, also Bratislava and Bucharest. Previously it had announced the postponement of the opening of a new base there, also to Dec-2020,

So there is latent interest in the arrangement and the authorities will be hoping for a change in fortune next year, having fought hard for this exception to the regulations.