Kenya Airways (-0.5%) plans to acquire an additional two E190 aircraft for regional operations, the first of which is expected to be delivered later in 2010. The aircraft will be leased from US-based Jetscape for eight years. The carrier also plans to increase frequencies on all regional and transcontinental routes for operational efficiency.

1time (shares flat) announced it will request the Competition Tribunal to fine Kulula up to 10% of its turnover in the past financial year for an agreement it made with Lanseria International Airport. An application by 1time to amend its complaint to include penalties against Kulula would be heard on 02-Jul-2010. 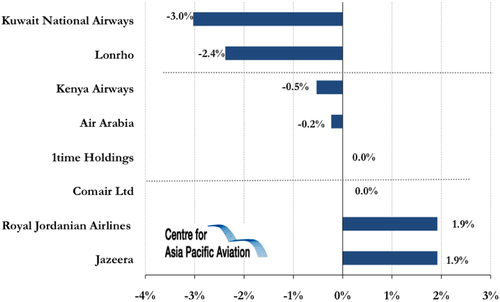