Shares in Southwest gained 1.0% yesterday to USD12.99 on more than 5.08 million shares, while JetBlue shares remained unchanged on the same day that JP Morgan revised its 3Q2010 estimates for both carriers.

JP Morgan stated JetBlue’s Sep-2010 RASM growth of 10% was in line with its 11% estimate, leading to a 3Q2010 RASM of 12.7% compared with a 13.5% estimate. Holding other inputs constant, this immaterially reduces 3QE EPS from USD0.21 to USD0.20 versus consensus of USD0.19, according to JP Morgan, which maintains its “neutral” rating on the company’s stock.

Meanwhile, Southwest’s RASM Sep-2010 growth of 11% missed JP Morgan's 15% forecast, leading to 3Q RASM of 14.7% compares with its 16.6% estimate. JP Morgan added that holding other inputs constant, this reduces 3Q EPS from USD0.29 to USD0.25, in line with consensus of USD0.25. The company maintains its “overweight” rating on the LCC.

Last month, Southwest Airlines announced it would purchase discount rival AirTran Holdings for USD1.4 billion, giving Southwest access for the first time to Delta’s home base of Atlanta, one of the world’s busiest airports.

Frontier Airlines open to market deal with another major carrier

Meanwhile, Republic Airways CEO Bryan Bedford stated Republic’s subsidiary, Frontier Airlines, is open to a marketing deal with another major carrier to expand its network but declined to identify any potential partners for the carrier. Mr Bedford commented in an interview with Bloomberg:  "We do believe there is a low-cost opportunity where, frankly, we think Frontier could help some of our network partners”, adding: “It's premature to speculate on who and what that would be." 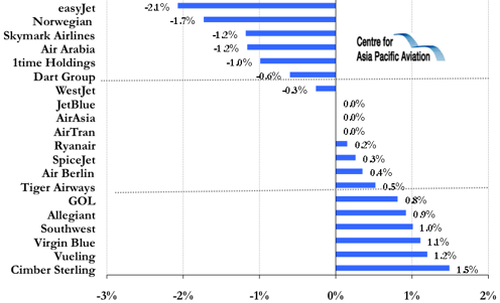