JetBlue’s shares were down 2.3% yesterday, upon the release of its 3Q2009 financial results, in which the carrier reported a third consecutive quarter of profitably, despite a “tough economic environment”.

In the quarter, the carrier reported a 208% year-on-year increase in operating profit to USD66 million (for an operating margin of 7.7%), with a turnaround in net profitability, from a USD8 million net loss in 3Q2008 to a net profit of USD15 million. The net result was lower than market expectations.

CEO, Dave Barger, stated that the actions taken by the carrier in 2008, including a fuel hedge portfolio restructure, capacity reallocations and aircraft sales/deferrals have had a positive effect on the carrier's results.

However, the LCCs, like the other carriers in the US market, experienced unit revenue weakness in the quarter, with yields falling 7.7%, as the average fare was down 10.9% to USD127. Passenger revenue and operating revenue per ASM were also weaker (both down by 8.0%), although unit operating expenses (including fuel) were down by a greater degree (-13.0%).

The yield weakness is expected to continue, with the carrier expecting PRASM and RASM reductions of 3-6% in 4Q2009.

In Europe, Norwegian Air Shuttle’s shares rose 4.5% following the release of its 3Q2009 results, in which the carrier reported a net profit of EUR45 million and an operating profit of EUR57 million (- 10% and +146%, respectively), for an 11 ppt operating margin to an industry-leading 21%.

The carrier also reported a 15% increase in revenues during the quarter, stable unit revenues and a slight yield reduction of 1.6%, less than that experienced by most rivals in the quarter.

Germanwings expects most profitable year ever in 2009

Also in Europe, Germanwings CEO, Thomas Winkelmann, stated the LCC is having its most profitable year ever, according to an interview with the Financial Times Deutschland. Lufthansa’s LCC unit is set for records in both absolute profit and margin, according to Mr Winkelmann.

In the Asia Pacific region, SpiceJet’s shares slipped 4.9%. The carrier’s CEO, Sanjay Aggarwal, in an interview with Business Standard, stated SpiceJet has all the ingredients for a successful airline. He added that LCCs are currently performing much better than their full-service counterparts, whose costs are around double those than LCCs, including SpiceJet.

However, Mr Aggarwal stated yield weakness in the Indian market remains a concerns, with fares in 2009 almost 30-40% lower than 2008 levels. However, he conceded that the carrier has “ taken a hit on the yields by 40% and if fares go up by 25%, it is still not good enough”. 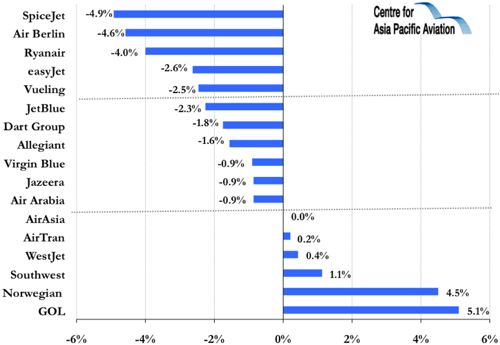