The majority of North American carriers were up on Thursday (09-Jun-2010), gaining with the wider market. The Dow (-0.4%) was up on news China’s exports reportedly grew 50% year-on-year in May-2010, suggesting continued strong growth in the underlying economy.

United Airlines and Delta Air Lines up on analyst recommendations

United Airlines (+2.5%) gained after Zacks Equity Research recommended the carrier’s stock, stating it was the most likely to benefit the most from the improving economy. The analysts cited the carrier's improving revenues and a rise in Business demand on international routes.

Zacks also recommended Delta Air Lines (+1.0%), stating the carrier is “uniquely positioned” to benefit from its merger with Northwest Airlines. It also noted that Delta has recently seen a “surge” in Business demand and improved pricing. See related report: Delta on the move: New York, Africa, Asia Pacific and more 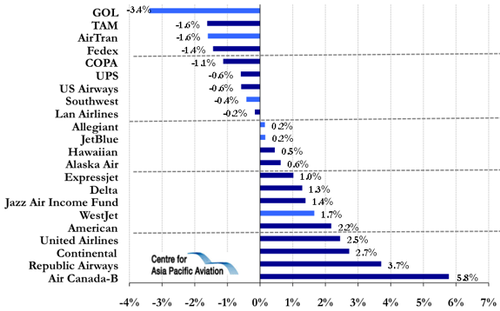