jetBlue Airways had a tough start to 2017, projecting a unit revenue decline of 8% to 9% for the first month of the year. The airline’s Jan-2017 unit revenue performance sets the stage for an overall negative performance in 1Q2017, and the company is offering little visibility into its outlook for 2Q2017.

The airline has outlined various factors for the surprising unit revenue decline for Jan-2017, including timing of YE2016 holidays, its new service to Cuba, and additional service from Newark Liberty International. After the less than stellar results for Jan-2017, investors were looking for jetBlue to offer remedies for the weak performance, but for the moment the company is keeping its 2017 capacity projections intact. The back and forth is a classic example of markets demanding immediate action when airlines aim to take a more measured approach in adjusting their strategies.

Investors are already concerned about the overall financial performance of US airlines in 2017 as unit costs are rising faster than unit revenues. jetBlue is facing its own cost inflation during 2017, and its rocky start will result in its revenue performance being closely scrutinised, with the potential calls for capacity cuts growing louder.

The airline joined many of its US peers in noting that close in bookings and yields gained strength at the end of 2016, but jetBlue is forecasting a unit revenue decline of 8% to 9% for Jan-2017, at the same time as many US airlines are projecting either a flat unit revenue performance or modest growth year-on-year for 1Q2017.

jetBlue cited varying factors for unexpected negative unit revenue performance for Jan-2017, including the calendar placement of year-end holidays in 2016 which it stated as having driven 3ppt of the decline. jetBlue's capacity additions from Newark to its Florida markets after operating restrictions were lifted at the airport, its new service to Cuba and additional US intra-West Coast flying added another 1ppt of the decline. The airline also stated that a 3ppt decline in the “cleanest” portion of the month in which year-on-year comparisons were made did not distort performance.

The company offered an imprecise unit revenue outlook for the remainder of 1Q2017. Executives have stated that unit revenues for peak periods in Feb-2017 were performing well. The Easter holiday falling in Apr-2017 will drive some pressure for Mar-2017.

The reasoning is that jetBlue does not want to get caught offering guidance that it ultimately does not meet.

There are arguably good grounds for this approach. Although the company’s cautious approach sits against a backdrop of many US airlines outlining a targeted timeframe for a return to positive revenue, they often miss those deadlines and acknowledge their own shortcomings in forecasting. Delta Air Lines missed its targets for a return to positive unit revenue in both 2015 and 2016, and has admitted its weakness in forecasting revenue trends.

jetBlue has also stated that a good portion of its bookings fall into the close in category: “so from that perspective, it doesn’t take take much swing to make a one or two point difference”, said company EVP commercial and planning Martin St George.

There is also a certain level of economic uncertainty in the US until the fiscal policies of the new administration of President Trump are crystallised. Generally, businesses are embracing promises of fewer regulatory burdens, but a protectionist trade stance and the recent travel restrictions on citizens residing in Iraq, Syria, Iran, Libya, Somalia, Sudan and Yemen are creating some uncertainty over US economic prospects.

The obvious question jetBlue executives are fielding is whether the airline is prepared to cut its planned 2017 capacity growth of 6.5% to 8.5%, which is slightly less than the 8.9% ASM expansion the company recorded in 2016. 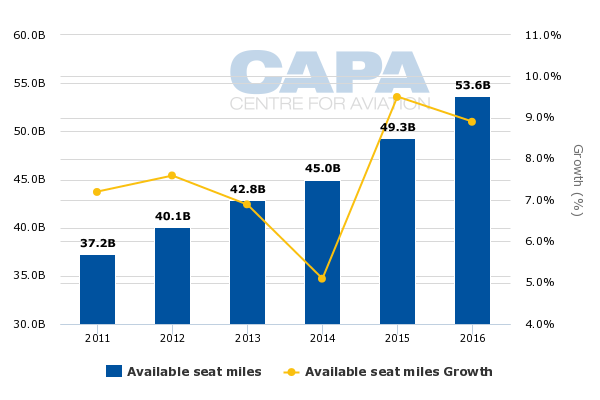 Schedules in CAP and OAG show that jetBlue’s system ASMs are up year-on-year in 2017 through the first half of the year. 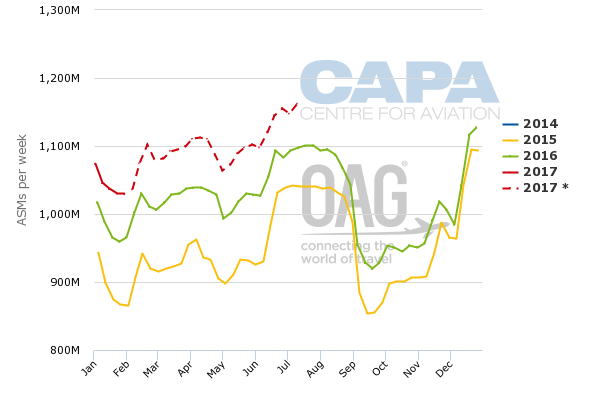 In the recent past jetBlue has shown some reluctance to pull the capacity lever at the first sign of revenue weakness. At one point in 2016 jetBlue explained that it was managing to margins, and that removing a certain level of capacity would be negative to its performance in that metric.

Ultimately, jetBlue did cut its capacity forecast for 2016. Originally the airline had planned growth of 8.5% to 10.5%.

As Jan-2017 came to a close jetBlue was not prepared to cut its planned 2017 capacity growth, stating that it did not want to overreact to a single month – which is not an irrational argument.

The airline is not ruling out capacity adjustments, but it appears that investors are looking for more definitive language regarding adjusting its supply. jetBlue’s share price took a tumble at the end of Jan-2017, closing at USD19.39 in 30-Jan-2017 – a drop from a close of USD22.88 on 11-Jan-2017. 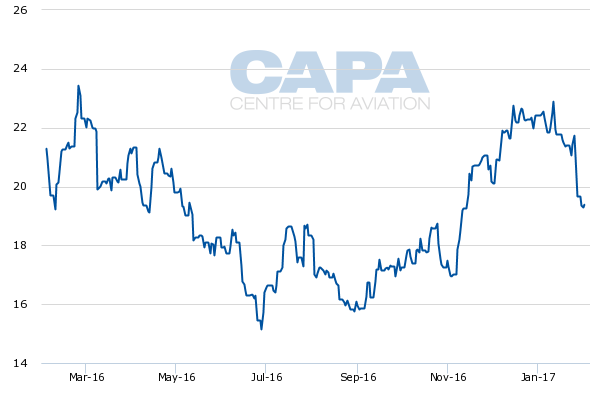 jetBlue’s larger airline counterparts, American, Delta and United, are keeping 2017 capacity growth below 2% for 2017. Southwest is capping its growth at 3.5%.

jetBlue’s argument for higher than average capacity growth is that it remains in growth mode. The airline represents just 3% of US system ASMs, and Delta’s fleet of 846 aircraft is more than three times the size of jetBlue’s fleet of 228 jets. 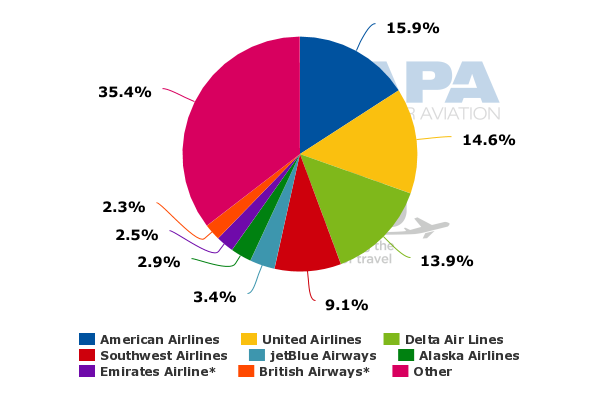 Source: CAPA Fleet Database.
Orders include those placed directly by the operator and by lessors assigned to the operator, from 3-Feb-2017 onwards.

jetBlue faces the challenge of definitive rising costs, and a murky revenue outlook

Investors seem reluctant to fully embrace jetBlue’s logic of growing strategically in an environment where US airlines are facing marked cost inflation in 2017. jetBlue is forecasting a 1% to 3% increase in 2017, and its unit revenue performance in Jan-2017 does not bode well towards setting the stage for unit revenue growth catching up with cost inflation.

jetBlue has a plan in place to shed up to USD300 million in costs by 2020, and believes it can contain unit cost growth to 1% or lower beginning in 2018. But at the moment 2018 seems far off, as the airline’s unit revenue forecast is murky while costs definitively rise in 2017.

jetBlue is likely to refine its capacity growth targets for 2017, but clearly is not making those changes quickly enough for the satisfaction of investors. It is a tough balance for an airline working to grow its network footprint while balancing the market realities of unit revenues failing to keep pace with cost inflation.

The company’s revenue struggles in early 2017 also show that although trends are moving in a positive direction, the path for US airlines attaining positive unit revenue in 2017 could be filled with unanticipated challenges.