American and JetBlue are not allowing a challenge from the US Department of Justice (DoJ) to their nearly year-old alliance to deter the evolution of that partnership.

JetBlue has already recorded fairly solid revenue from its tie-up with American, and as the alliance continues to expand, both airlines should reap continued upside if antitrust concerns from the government can be kept at bay. JetBlue and American’s calculus for the alliance remains intact, and now they just need to convince the courts to endorse their argument that the DoJ’s concerns are misplaced.

JetBlue and American launched the Northeast Alliance (NEA) in Feb-2021, and recently JetBlue’s president Joanna Geraghty explained that the airline had reached “USD100 million in codeshare revenue generated by the alliance in its early stages”. JetBlue and American are coordinating schedules at Boston Logan, New York JFK, New York LaGuardia and Newark International.

Through its tie-up with American, JetBlue has added nine new cities to its network and 32 new routes. “This would not be possible without the alliance”, Ms Geraghty said.

Overall, JetBlue and American are codesharing on 185 routes.

After some headwinds created by the Omicron variant of COVID-19 start to dissipate in late Feb-2022, JetBlue is gearing up for growth for the remainder of 2022. 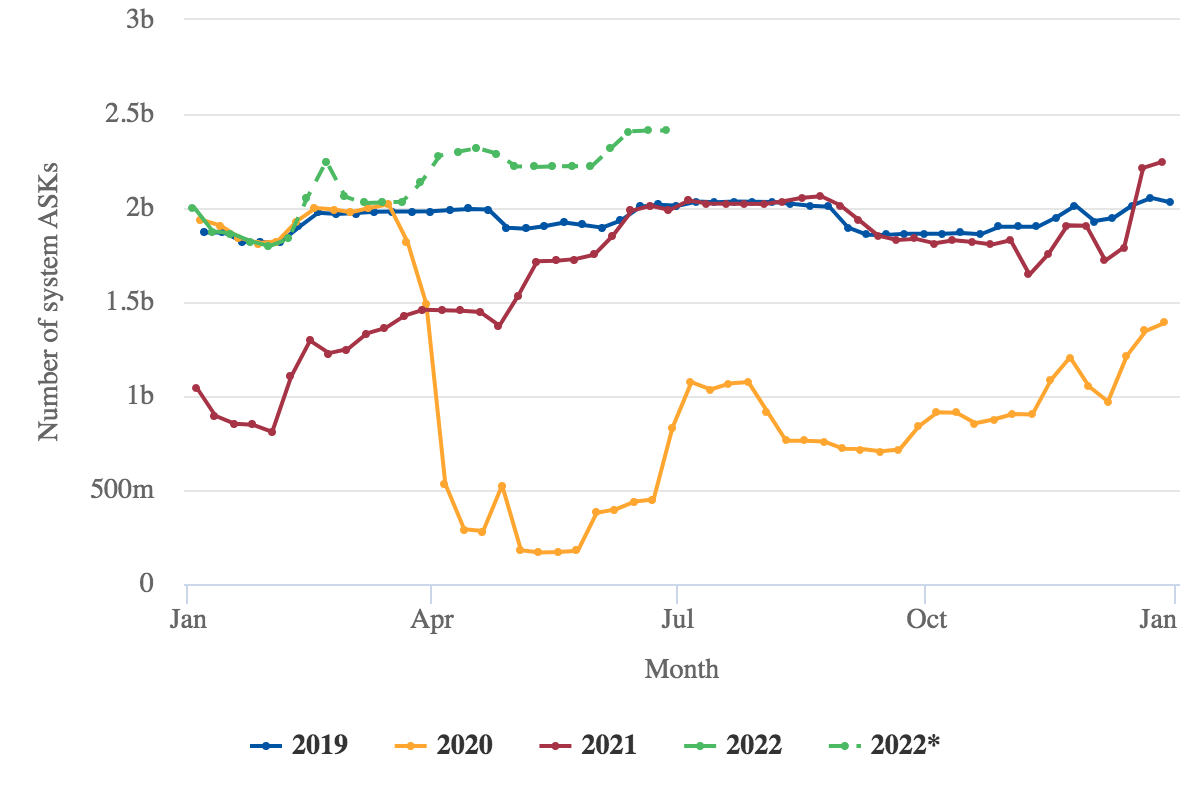 “Over three-fourths of our 2022 growth is planned to be deployed in the Northeast as we ramp up the NEA”, said Ms Geraghty.

In the summer of 2022 JetBlue is planning 300 daily departures on average from its New York area airports – JFK, LaGuardia and Newark International.

One aspect of the alliance that both JetBlue and American have touted is their combined ability to capture more business travellers in the US Northeast.

Ms Geraghty explained that during the last quarter of 2021,”...we were encouraged to see corporate bookings recover to roughly half of 2019 levels prior to the onset of the latest [COVID-19] wave[,] compared to approximately one-third at the beginning of the quarter.”

Through the NEA JetBlue intends to gain a larger share of business travel due to a more expansive network and robust schedules.

At the end of 3Q2021 American chief commercial officer Vasu Raja explained that through the combining of its network with JetBlue American had expanded its transcontinental offerings from four trips per day from JFK to San Francisco to 12 to 14 daily trips with a fully flat seat offering.

“…When you think about New York, it’s a business travel market which is not 2x or 3x larger than the next biggest market, but several orders of magnitude more than that”, Mr Raja said.

By combining with JetBlue to compete more effectively in the New York market, American can bolster its performance in that region, reflected in an improved unit revenue performance. Mr Raja stated that instead of posting a RASM [revenue per available seat mile] in the market that is underperforming, the “system by 10% to 15%” RASM can now perform in line with the rest of American’s network.

The partnership evolves even as a challenge from DoJ looms large

Even as JetBlue and American tout the benefits of their newish relationship, in Sep-2021 the US DoJ mounted a legal challenge to the alliance, concluding that the NEA essentially merges the operation of the two airlines in Boston and the New York markets, leading to a reduction in competition in those regions.

Obviously JetBlue and American have different views, and have consistently stated that their arrangement creates a viable third competitor to Delta Air Lines and United Airlines in Boston and New York City.

Based on data from CAPA and OAG from late Jan-2022, Delta and United accounted for the majority of ASKs deployed from the three largest New York airports. Delta has a 21% share at JFK and a nearly 37% share at LaGuardia. United had a 68% share at its Newark hub. In Boston, JetBlue has a 24% share, followed by 21% for Delta and American’s 17% share.

Unsurprisingly, JetBlue and American have formally filed to dismiss the DoJ’s lawsuit in a federal court in Boston. A key element of their argument is that the NEA does not indulge coordination on pricing – an aspect that can spark antitrust concerns amongst regulators.

At the CAPA Live Oct-2021 conference JetBlue CEO Robin Hayes stated that outside Boston and New York his airline competes with “American very aggressively”, and he cited JetBlue’s entry into Miami as an example. Earlier in 2021 JetBlue had added service from American’s major Latin gateway to Boston, Los Angeles, JFK and Newark.

“I’m sure they [American] didn’t love that”, Mr Hayes said. “We started flying Miami-Los Angeles, a key market for them out of Miami. We kept plans to fly to London, and our London flight is not in the NEA, and actually competes with BA [British Airways] and American.”

In Oct-2021 American’s CEO Doug Parker summed up the opposition to the DoJ's action with his conclusion that, “...they’ve sued us, and we’re going to win the lawsuit. They are wrong. This is highly beneficial to consumers. And we’re perplexed as to why they filed this lawsuit. This is our prerogative and we’ll see them in court.”

Despite legal wrangling, JetBlue and American move full steam ahead

The partnership between JetBlue and American is one of several interesting tie-ups that have emerged during the past two to three years.

JetBlue and American’s calculus for the alliance remains intact, and now they just need to convince the courts to endorse their argument that the DoJ’s concerns are misplaced.