Jet2.com is a two-sided coin. Profitable every year since FY2008, the LCC’s FY2013 operating margin puts it in the top half dozen European airlines. In 2013 its operating profit grew by 23%, helping to drive parent Dart Group to a 33% increase in its operating result. The group, and the airline, appears to be well managed and well capitalised. Jet2.com serves leisure markets from bases in the northern parts of the UK and its top 10 routes include seven where it is the leading carrier.

However, Jet2.com also faces significant challenges. It faces competition from lower-cost LCCs in many of its markets and, although its network concentrates on slightly further flung destinations, the likes of easyJet and Ryanair are also moving into longer sectors.

Jet2.com’s capacity is more seasonal than any other leading carrier in the UK, bringing significant challenges to achieving year-round profitability. Its policy of acquiring second hand aircraft minimises capital expenditure, but gives it an ageing fleet with a structural operating cost disadvantage.

The group’s balance sheet continues to be very conservative, with a year end net cash position (i.e. cash balance greater than gross debt) of GBP212 million. Its year end gross cash balance of GBP221 million is equivalent to just over three months of revenues. Included within cash and money market deposits is GBP100 million of restricted cash, but the group still has a net cash position even after netting this out.

Dart Group has seen revenues and profits grow every year since FY2010 and it has been profitable for at least 10 years. Unlike many groups that contain an airline and other businesses, the group’s airline is Dart Group’s most profitable business. The airline, Jet2.com, is the main subject of this report. 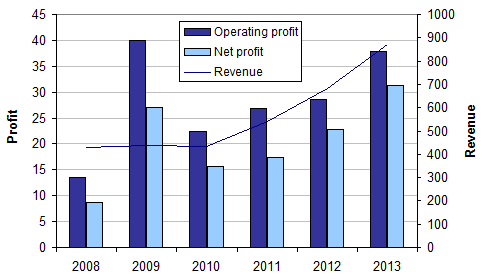 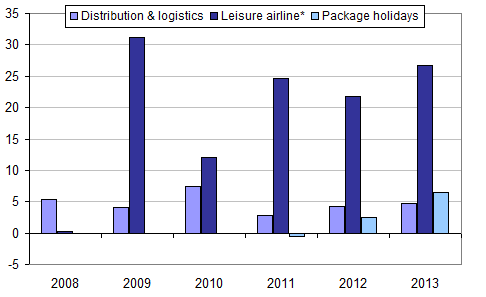 In FY2013, the Jet2.com saw revenue growth of 21% and accounted for almost two thirds of group revenue. The package holidays business, Jet2holidays, more than doubled its revenues and overtook the distribution and logistics business Fowler Welch to become the group’s second business segment by revenues (and by operating profit).

Jet2.com has been consistently profitable since it recorded a breakeven result in FY2008. However, although its revenues have grown significantly since FY2009, operating profit was lower in FY2013 than in FY2009 and its operating margin halved from 9.5% to 4.8% over this period. Nevertheless, its FY2013 result still places it among the top half dozen European airlines by operating margin.

In FY2013, Jet2.com grew passenger numbers by 13% to 4.8 million, compared with a 10% increase in scheduled seat capacity, with load factor up by 3ppts to an impressive 90%. This load factor improvement was in part underpinned by the sale of seats to Jet2holidays, which represented 17% (2012: 10%) of total scheduled flying. 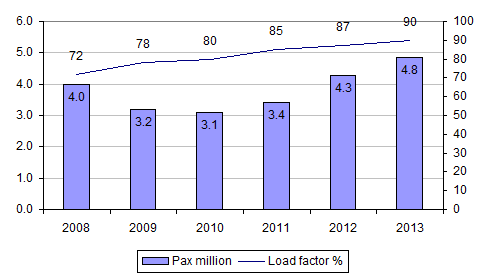 Growth in per passenger ticket and retail revenues 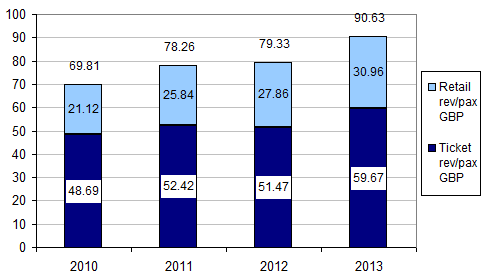 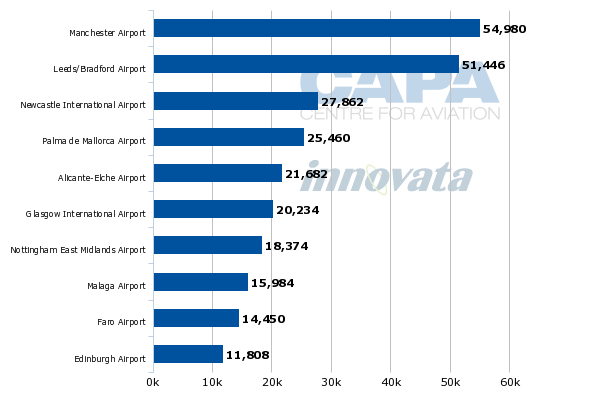 Jet2.com’s share of seats at its UK bases is mixed. At Manchester, Jet2.com’s biggest base by seat capacity, it is number three with 12% of seats, behind Ryanair and Monarch. At its second biggest base, Leeds Bradford, it is the leading carrier with a share of 47%, ahead of Ryanair and Monarch. At Newcastle, it is number one with 29%, ahead of easyJet on 24% and British Airways on 12%.

It is number four at Glasgow (12% of seats), number two at East Midlands (17%), number six at Edinburgh (4%), number two at Belfast International (9%) and number one at its smallest base Blackpool (93%). In every base, it faces significant competition from other leading LCCs.

Unlike many other European LCCs, Jet2.com has not established bases outside the UK. This is reflected in relatively weak shares of seat capacity at its biggest non-UK airports. At Palma de Mallorca, it is the eighth biggest carrier, with a share of less than 4%, and at Alicante it is number four, with 7%. At Malaga it ranks eight, with 4% of seats, and it is fourth at Faro, with just under 8%. It has been reported that it plans to base one 737-800 at Lanzarote, where it is number six with 5%. 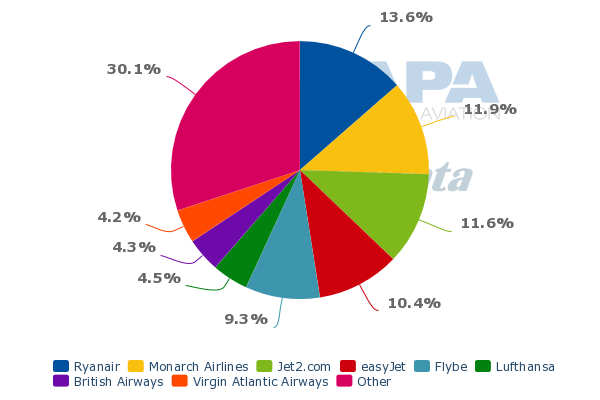 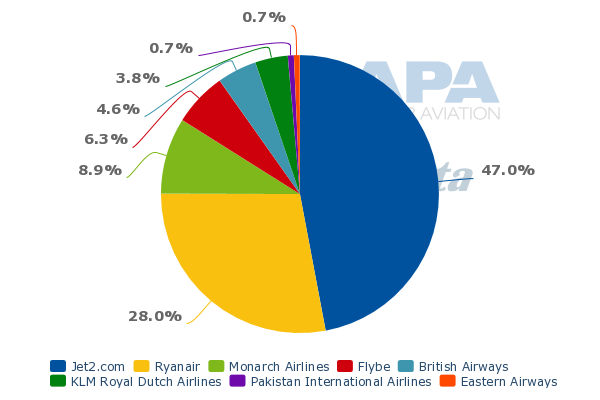 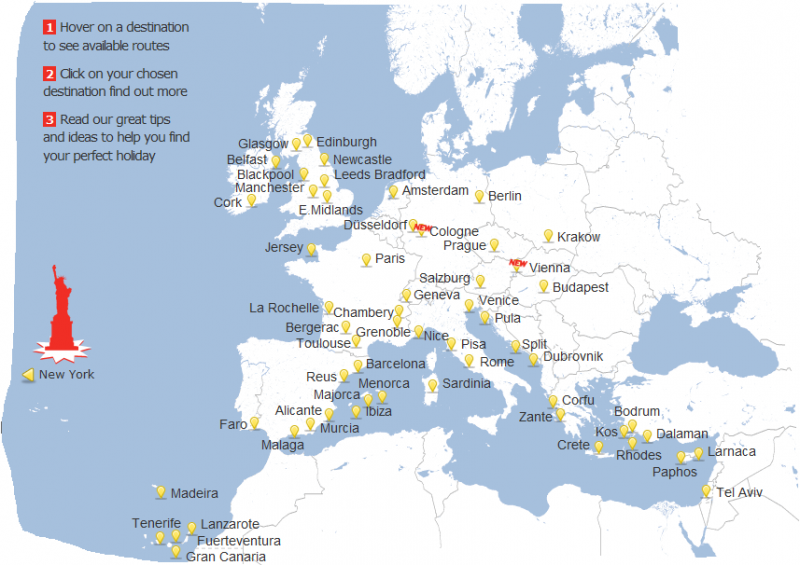 Jet2.com operates a single economy class cabin and, according to Innovata, more than 99% of Jet2.com’s seat capacity is international (week of 15-Jul-2013).

Almost four fifths of this seat capacity is to Western Europe and one fifth to Eastern/Central Europe. It also has one destination in the Middle East and offers a limited pre-Christmas schedule to New York, but is otherwise a short/medium-haul operator. 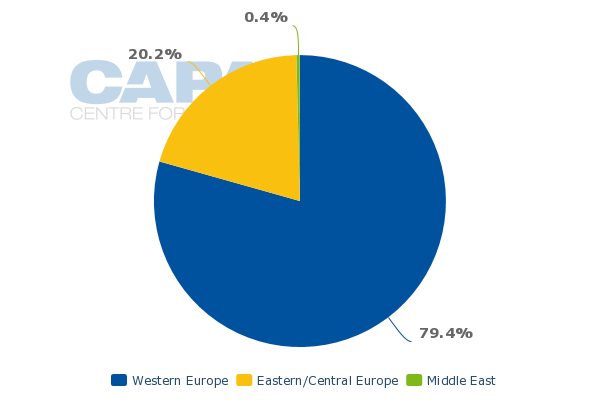 More than 56% of its seat capacity is to Spain, with Portugal, Italy, Turkey, France and Greece being its next most important destination countries (source: Innovata, week of 15-Jul-2013). These destinations reflect Jet2.com’s focus on leisure markets. 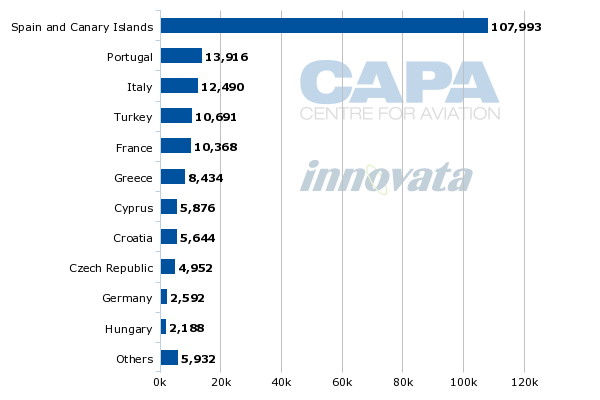 Some strong positions on Jet2'.coms top 10 routes, but competition is plentiful

Spanish destinations (including Spanish Islands) feature in all of Jet2.com’s top six destinations by seat capacity and in nine of its top 10. It has market leading positions (by seat capacity) on seven of these routes, but it has no monopolies. It faces competition from Europe’s leading LCC Ryanair on seven of its top 10 routes and from Europe’s number two LCC easyJet on five. Monarch Airlines, with whom it shares a similar network profile of leisure routes, competes on five of these routes.

Jet2.com’s focus on leisure routes gives it the most seasonal capacity profile of any leading carrier operating in the UK.

In Jul-2013, it is the sixth biggest carrier by seats in the UK market, while it is number nine based on Dec-2013 schedules (source: Innovata). Its Dec-2013 seat capacity will be just half that of its Jul-2013 capacity, a far greater seasonal reduction than for any other carrier in the UK top 10.

The fleet includes three Quick Change variant Boeing 737-300s, which are used for the company’s Royal Mail night-time flights on 18 daily frequencies. These can be converted quickly from passenger configuration to freight configuration.

The carrier’s Boeing fleet is ageing, with an average 737 age of almost 22 years and an average 757 age of close to 24 years. Its strategy of acquiring used aircraft is in contrast with that of leading LCCs such as Ryanair and easyJet, which operate a young fleet of aircraft bought new from the manufacturers. It can be argued that Jet2.com’s approach is more prudent and less risky to its balance sheet as it minimises capex outlays. On the other hand, its operating costs are likely to be higher due to the less efficient fuel burn and higher maintenance requirements of its older fleet.

Dart Group’s accounts do not split operating cost categories by business segment, but, even if its total fleet costs (costs of acquisition, maintenance and operation) are similar to those of other LCCs on a per seat basis, Jet2.com’s approach may need to be reconsidered in the light of new generation engine technology entering the market with the 737MAX and the A320Neo. This will bring further operating cost advantages to operators of the new generation equipment. Jet2.com’s disadvantage, if it were to seek to buy new aircraft, is that it would be unlikely to order the quantities necessary to secure significant discounts from list prices. 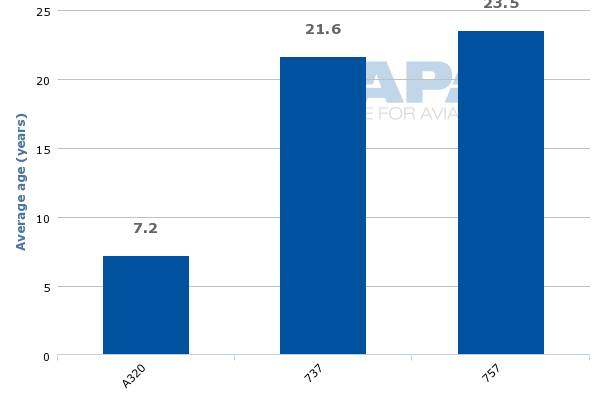 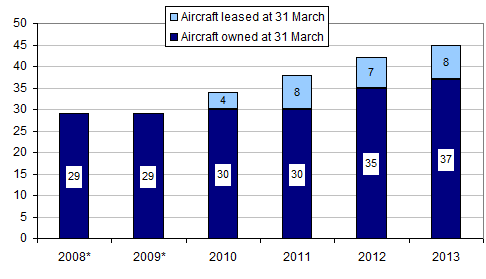 Dart Group does not report sufficient data to allow analysis of CASK and RASK for Jet2.com, but it is possible to look at the development of total revenue per passenger and cost per passenger for the airline. Jet2.com operates cargo flights for the Royal Mail and these contribute both costs and revenues that are not linked to passengers. Nevertheless, cargo flights account for only around 10% of Jet2.com’s frequencies (week of 15-Jul-2013, source: Innovata) and it seems likely that they account for less than 10% of its costs (since mail flights are domestic and, therefore, shorter than Jet2.com’s average and since cargo handling costs are lower than passenger handling costs).

Thus it seems reasonable to analyse total costs and revenues on a per passenger basis. 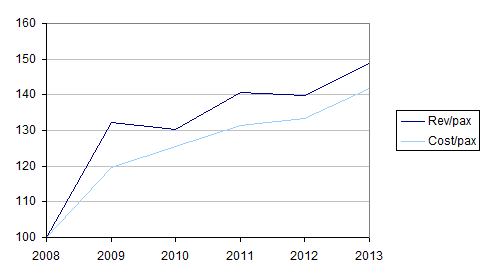 Jet2.com will lose two, and retain six, of its eight Royal Mail routes when its current contracts terminate in 2014. As noted above, it is likely that dedicated cargo flights account for less than 10% of the airline’s costs. The company does not report the level of revenues it earns from these flights, but an estimate of its passenger revenues can be calculated from figures reported for ticket revenue per passenger and retail revenue per passenger and passenger numbers. The balance of revenues reported for the airline in total presumably mainly comes from cargo and accounted for 21% of airline revenues in FY2013.

This analysis suggests that the Royal Mail business contributes significantly more to Jet2.com’s revenues than it does to its costs and so the loss of part of this business may erode its margins.

Jet2.com is among the higher-cost LCCs

However, it is among the higher-cost LCCs, even after recognising that its average sector length is longer than most other LCCs.

The reasonable level of profitability that it achieves owes much to a relatively high level of revenue per passenger, part of which is contributed by Royal Mail flights, as noted above. As its Royal Mail business declines from 2014 and, as seems likely, competition from lower-cost LCCs grows, the challenge will be to reduce its cost base in order to remain profitable. 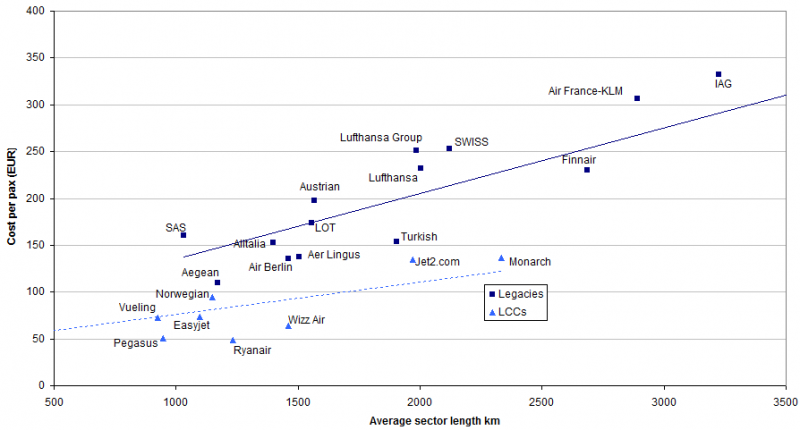