Jet Airways back in the black in first quarter, Kingfisher getting closer

Shares in Kingfisher Airlines and Jet Airways fell 3.8% and 2.3% on Friday as the airlines unveiled their first quarter (Apr-Jun-2010) earnings highlights.

Kingfisher’s total revenue rose 21% to USD357.6 million, while total costs rose 13% to USD412.4 million, producing an loss after tax of USD39.5 million, compared with a loss of USD49.9 million in the previous corresponding period.

Jet Airways reported a 24.5% increase in revenue to USD650.9 million, and a profit after tax of USD1.8 million, compared to a loss of USD46.6 million in the same period last year.

The airlines were quite optimistic in their assessments of the outlook, with Jet Airways noting the world’s airlines are “experiencing a marked improvement in demand in 2010, Indian carriers being no exception.”

Jet added: “Indian GDP forecast for the year is around 8.5%, which indicates a reviving economy, effects of which are seen in the domestic air traffic showing a reviving trend over the last few months. Airlines have achieved high levels of seat factors, as well as yield growth. The industry traffic grew by 23% in 1QFY2011 as compared to 1QFY2010. We are seeing a premium demand revival and this is expected to continue over the next few quarters. Over the last few quarters, we are seeing consistent growth in operating margins [on international routes] and expect the same to continue in future.”

Kingfisher stated it has further revenue enhancement initiatives planned in the current financial year, including membership of the oneworld alliance, which would “drive passenger growth in domestic and international markets”, as well as the launch of codeshare operations with British Airways. The carrier is also continuing its cost reduction drive, targeting a “channel shift and other planned initiatives around the GDS systems.” 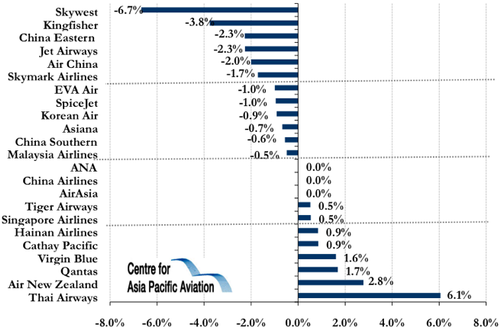