North and South American airline stocks were down on Tuesday (04-Aug-2010) as the Dow (-0.4%) declined on disappointing earnings results and economic data. Investors are concerned that the market's strong performance in Jul-2010 was based on an exaggeration of the economic recovery, following recent weak data on housing, factory orders and consumer spending.

North America drops to third in market size, capacity up for first time since 2007

North American capacity grew for the first time since 2007 as seat capacity for Aug-2010 reached 79.9 million seats, up 1% over the year-ago period, according to OAG Facts. The company also reported that frequency increased to a total of 885,078 flights, adding that seat capacity to and from North America has been slightly strong – growing 4% to 19.1 million in August.

"North America, the most mature aviation market and until recently the largest, trails all other regions in seat capacity growth,” said Peter von Moltke, CEO of OAG parent company UBM Aviation. “This region is now the third largest aviation market in the world, with combined domestic and international capacity of 99 million seats, falling behind Asia Pacific with 109.6 million seats, and Europe with 105.5 million."

OAG cited Miami as the high point for North American growth at 5% over Aug-2009. It also said Atlanta and San Francisco grew 1% each but the rest of the North American market was flat.

Unsurprisingly, OAG reported growth remains strongest again this month for the Asia Pacific region, which has led air travel growth throughout the decade. August 2010 seat growth in the Asia Pacific region will be 10% above last year, 18% above 2007 and 74% above 2001. China (including Hong Kong and Macau) continues to lead the region with growth of a phenomenal 175% since 2001, almost tripling seat capacity as the Chinese economy grew to second largest in the world. August seat capacity growth was strong in markets throughout Asia again this month including Shanghai (14%), Beijing (8%), and Hong Kong (7%).

Europe continues to grow on the domestic and international fronts. Capacity within Europe will rise 7% to a total of 78.9 million seats, on an increase in flights of 5% with more than 600 thousand flights added during the month of August. The number of seats scheduled to and from Europe will increase 7% to 26.6 million, and flights scheduled will increase 8% to a total of 118,433. Markets within Europe with notable capacity growth were Rome, (9%), Frankfurt (6%) and Amsterdam (6%).

The company cited a lower US dollar exchange rate, a 4.9% drop in billable block hours and a 3% decline in departures. In addition, it experienced a decline in the mark-up charged to Air Canada as part of its capacity purchase agreement which were offset by rate increases and an increase in pass-through costs.

“We have made significant progress building upon our growth initiatives, and now with our new long term collective agreements in place, we have greater stability and predictability,” said President and Chief Executive Officer Joseph Randell.  “The second quarter of 2010 has been busy and productive. Jazz employees have truly gone above and beyond to reach these important milestones, and I sincerely thank them for their perseverance and dedication.  We have an amazing team.”

Its cost discipline paid off with total operating expenses declining from CAD336.9 million to CAD332.1 million, a decrease of CAD4.8 million or 1.4%. Aircraft fuel costs increased by CAD9.3 million on a CAD12.2 million increase in fuel costs. These were offset by a CAD2.9 million decline in fuel usage with the drop in block hours. Aircraft maintenance expense decreased by CAD3.5 million as a result of the lower dollar exchange rate on certain material purchases of CAD2.1 million; and a decrease in block hours flown of CAD2.0 million; offset by other maintenance costs of CAD0.6 million.

Non-operating expenses amounted to CAD3.2 million, representing an increase of CAD2.4 million on a net increase in interest expense relating to the issuance of convertible debentures by Jazz in Nov-2009, a foreign exchange loss and a reduction in gain on disposal of property and equipment.

Elsewhere, GOL (-6.7%) fell to its lowest point in three months. Continental Airlines (-4.3%) and United Airlines (-4.0%) were also down, after the carriers agreed to released further information on their merger negotiations following three lawsuits over the issue. 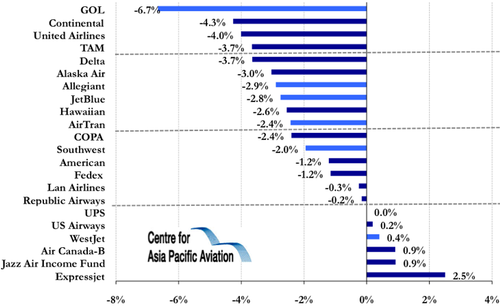