Yet LCC market share may remain around 10% as Skymark, one of Japan's so-called "new age" airlines, resumes growth. Jetstar Japan is about two thirds the size of Skymark domestically. Peach and Vanilla Air plan to merge, and their combined size is almost as large as Jetstar Japan.

CAPA's LCCs in Northeast Asia Summit in Seoul in Jun-2018 will explore the dynamics of aviation in Japan and implications for foreign airlines serving the country.

Japan's LCC market will be reviewed at CAPA's North Asia LCC Summit in Seoul on 11/12-Jun-2018. Sign up now for an early bird registration

The Japanese LCC domestic market is undergoing a resumption of growth. The year 2017 ended with a slightly decreased LCC carriage of passengers. LCCs (Jetstar Japan, Peach Aviation, Spring Airlines Japan and Vanilla Air) collectively carried 0.5% fewer passengers. This is effectively flat performance, but notable since there has been four years of over 20% growth in Japan's domestic LCC market per annum.

The loss of momentum was due to two factors. First of these, Peach and Vanilla Air did not expand domestically as fast as they had in the past. However, they did still grow, but their growth was not enough to offset the second factor: Jetstar Japan decreased its domestic presence. 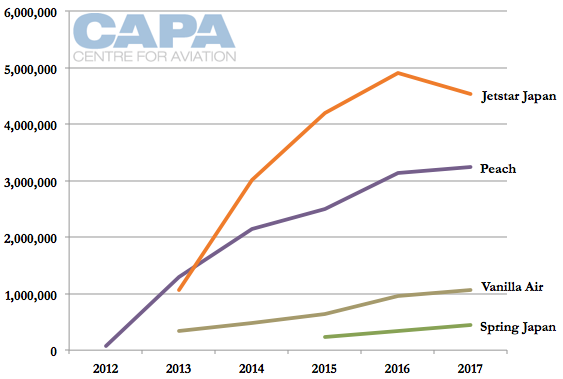 Full figures for FY2017 (the 12 months to 31-Mar-2018) are not yet available; the latest are through 3Q (the nine months to 31-Dec-2017). During this period, compared to the corresponding time a year earlier, the Japanese domestic LCC market expanded 4.7%, making up for the lost year of growth. These figures include passengers carried on AirAsia Japan, which launched at the end of Oct-2017. Excluding AirAsia Japan, the four incumbent LCCs still grew 4.3%.

AirAsia Japan's footprint appears small, since only two months of operations are included and these months had a typically small start-up size.

Note that this is for the entire market: Jetstar Japan and Peach are not growing or cutting on exactly overlapping networks. 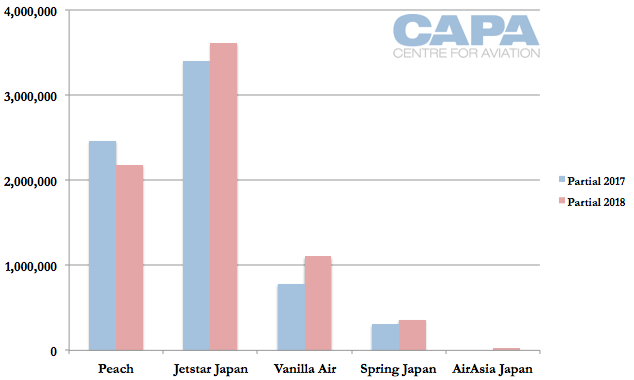 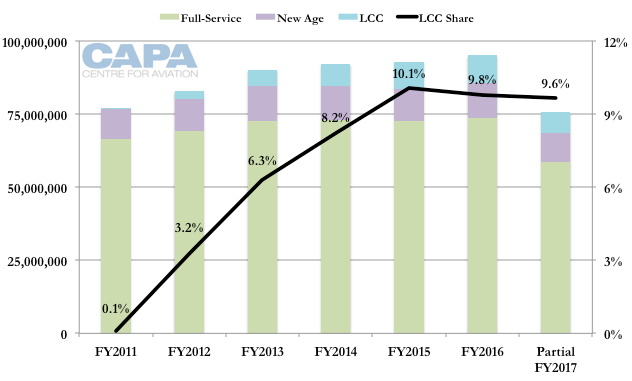 LCC market share gains in FY2015 were due to their own growth but also a contraction of the "new age" airlines, notably Skymark, which cut capacity following its bankruptcy restructuring. 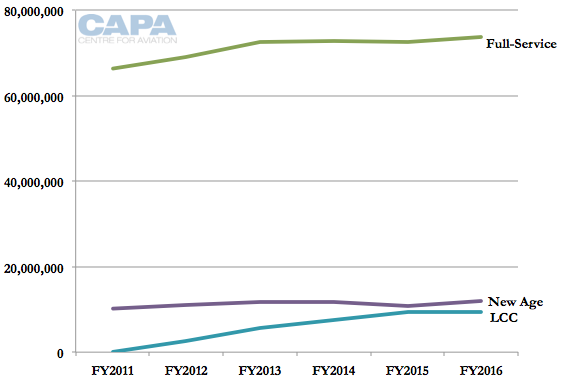 Young Jetstar Japan is two thirds the size of Skymark

ANA and JAL have maintained a firm grip on the Japanese domestic market, carrying over three quarters of domestic passengers on their own brands before considering market share from airlines they have invested in.

This is not surprising. What is a fluid situation is that of Japan's smaller airlines. Skymark remains Japan's third largest airline, albeit by a distance, with 7% market share (although higher at the key airport Tokyo Haneda). 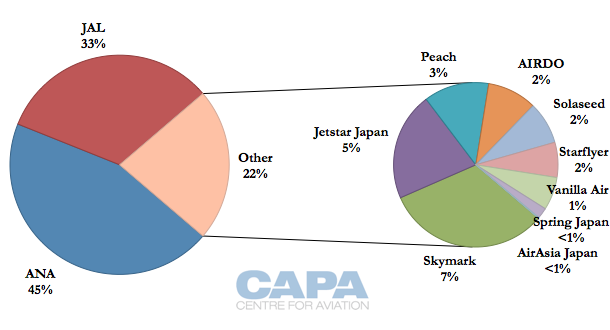 Jetstar Japan has 5% market share and carried two thirds as many domestic passengers as Skymark. Jetstar Japan appears to be on a path to rival Skymark although Jetstar Japan does not have Tokyo Haneda domestic slots, but it does have extensive international flying (which Skymark does not).

Peach and Vanilla Air have announced their intent to merge. Their combined presence is 91% the size of Jetstar Japan. This makes them a notable competitor to Skymark, again excluding the function of Haneda slots. This is an achievement for Japan's still relatively young LCC sector; Skymark has been flying for approximately 20 years. 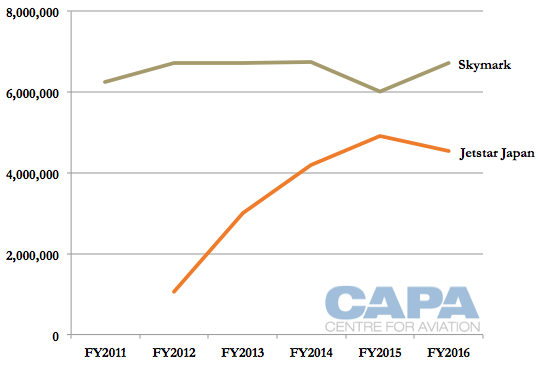 Skymark had lower passenger carriage in FY2015 as a result of its bankruptcy restructuring. It rebounded in 2016 with passenger traffic approximate to hat of FY2014. So far in FY2017, Skymark has carried 9% more passengers than in the previous year, setting the airline to reach a record. 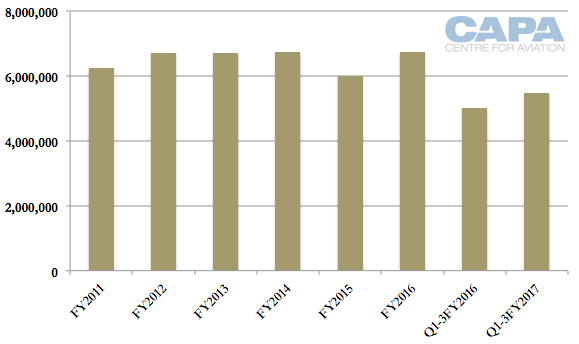 Jetstar Japan reduced its presence a year later than Skymark owing to regulatory problems that have since been resolved. 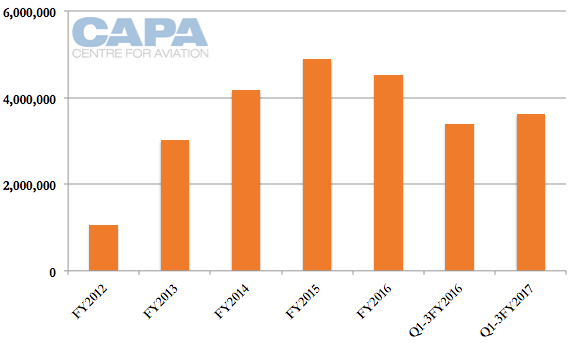 Outlook: Skymark maintains a domestic advantage with Haneda slots, but LCCs are closing the gap

Jetstar Japan and the merged Peach/Vanilla Air entity may be very competent and capable of becoming as large as – or bigger than – Skymark Airlines. But competitive opportunity will be shaped by the structural fact of Skymark's significant Tokyo Haneda slots.

Haneda will be going through a slot expansion programme, but for international and not domestic flights. The LCCs will make a strong argument to be allocated international slots.

Still in the domestic market, Haneda may be high-yielding but there is more to the Japanese domestic market than Tokyo. This presents opportunity for LCCs. So too is there the chance for market stimulation and all-new services – the classic benefit of LCCs.