Japan Airlines makes preparations for relisting by end of 2012

Japan Airlines has launched an office tasked with preparing for a relisting of the airline’s stock by the end of 2012. According to a report in the Nikkei morning edition on 6-Oct-2010, JAL aims to “demonstrate its commitment to quickly getting back on its feet” but is yet to conclude negotiations with creditors for additional funding.

The office was established last Friday under an administrative branch overseen by the Enterprise Turnaround Initiative Corp of Japan (ETIC), which is guiding JAL’s rehabilitation and will undertake discussions with brokers. According to the Nikkei, JAL plans to explore the sale of ETIC-held shares to a third party, as well as the sale of stock to general shareholders through a relisting.

ETIC's support for JAL will last only three years (until Jan-2013) in which time it must find new shareholders and pay back the funds it has received from the government to continue operating through its restructuring process.

In trading yesterday, All Nippon Airways fell 1.7%, while the only other option for airline investors in Japan, Skymark Airlines, soared 10%. There has been a lot of investor attention focused on the Haneda Airport expansion and the benefits that will bring. Skymark will gain extra slots there from the end of Oct-2010. Skymark is the most independent of the Japanese "newcomers", but suffered from cockpit crew shortages in the past. That problem has been solved by hiring of former JAL crew, so Skymark is well-placed to expand - and seemingly in favour with investors at present. 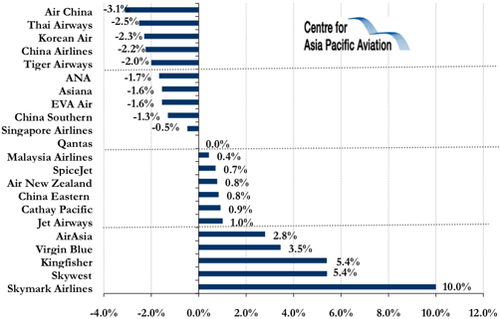