The first half of JAL’s 2009-10 financial year generated a net loss of USD1,465 million, a USD2 billion reversal from last year’s first half result. With USD15 billion in debt, this is an airline that will require major surgery – including amputation - if it is to become viable in the medium term. Even a large upturn in the economy will not provide the respite that is needed to reverse this avalanche of red ink. 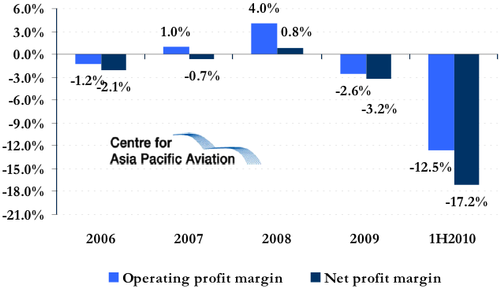 JAL’s steep revenue reduction can be clearly related to the carrier’s international capacity reductions and traffic declines, as shown in the graph below. Further international route reductions have been announced, although there must surely be more to come. 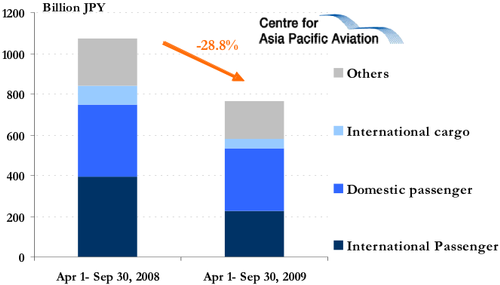 Steep fall in international yields has been the main issue

But it is international yields that have really hurt. Here the strong Yen vs USD rate has not been kind to JAL, at the same time as the north American market turned down steeply. While domestic yields declined only 1.9% for the half, international yields were off by 35.5%. For the second quarter, yields were down even more severely, by 37.1%, indicating a deteriorating trend.

With an 11.3% reduction in RPKs (slightly less than the 11.9% lower capacity), this combined to produce a mammoth 42.8% fall in international revenues. 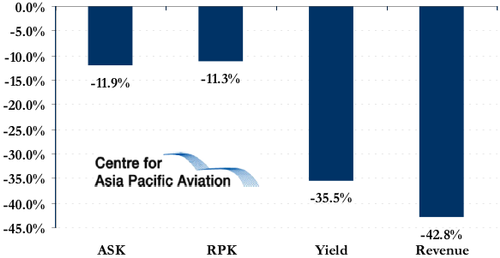 Capacity cutbacks (ASKs) have generally outstripped demand (RPK) reductions on a route basis, except for the major markets of the Americas and Europe. Best performing in this context has been China, where despite a 14% cut in capacity, RPKs increased by 5%. 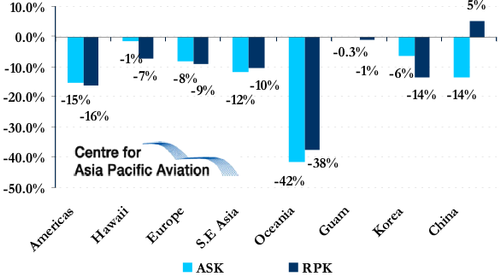 Whereas the highly competitive international marketplace has caused JAL great yield pain and caused it to reduce capacity significantly, the carrier’s domestic market power has allowed it to hold yields up at the cost of substantial load factor reductions.

Domestically a cutback (ASKs) of only 3.1% has been matched by a fall in passenger numbers of 10.5% and a similar, 10.1% in RPKs. Japanese domestic travellers have seen little of the benefit of aggressive competition in the face of economic downturn – so many simply did not travel. 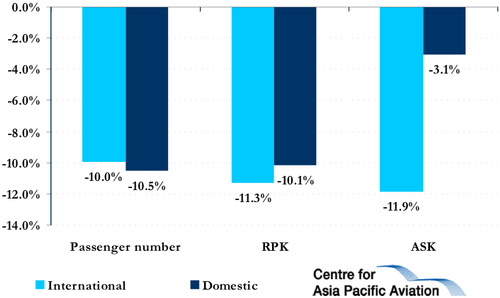 There is little encouragement either in the latest quarterly data, to 30-Sep-2009, with revenues off 40% and yields down almost as much.

However, capacity cutbacks of 13.2% have been bettered by a lower 4.5% reduction in RPKs, so that load factors are being clawed back. But the still precipitous decline in yield shows that there is a long way to go before the capacity-demand equation starts to put some upward pressure on prices. 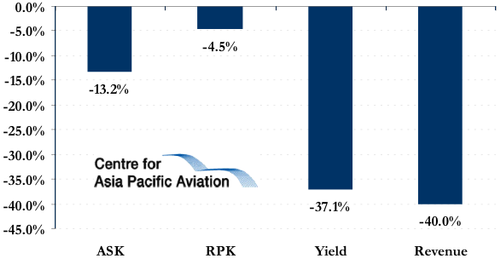 An academic result? Will a new and seriously viable airline emerge? Time to remove the protectionist shackles

However bad the latest results, there is little to be surprised about. JAL is so deeply in debt, with no prospect of independent survival, that the only question is the extent to which the Japanese government is prepared to go to prop it up while the carrier restructures – and how seriously viable the end result will be.

JAL is clearly not ever going to be the same airline again. It must surely emerge – assuming it does emerge – a vastly different entity following review by the Enterprise Turnaround Initiative Corporation. As time deadlines slip by for an outcome, the new financial year looms. Getting a viable airline in place before 31-Mar-2010 now looks a fragile possibility. A USD15 billion mountain of debt has to be put away somehow, as well as producing an airline that is capable of surviving without the longstanding protective support of Tokyo’s administration.

There is a broader issue at stake too. It must be patently obvious at this stage that protectionism cannot be the regulatory way of the future for Japan. The result of past policy and the accompanying government intervention is plain to see: it produces a carrier that is unable to stand upright on any commercial basis.

This is not an intractable problem. While JAL shudders, All Nippon Airways is quietly continuing along its independent and largely profitable path; it is suffering pain, just like most others, but it is not in need of any bailout.