The Republic of Ireland punches significantly above its weight in the aviation market, with airline capacity significantly outperforming the country's size by population.

It has three significant 'natural' advantages: its geographic position between Europe and North America, its strong cultural and economic links with the UK, and strong links with North America as a result of the Irish diaspora.

These factors position it well to build on strong point-to-point traffic flows both to its east and its west to act as a transit point between Western Europe and North America. Ireland's natural advantages have been boosted by a longstanding liberal policy stance by its governments and regulators towards aviation, as well as having a history of producing successful aviation leaders.

There must be something in this mix that works. In the ultra LCC Ryanair and national airline Aer Lingus Ireland has Europe's two most profitable airlines by operating margin.

In addition, Ryanair is the continent's biggest airline by passenger numbers.

Ireland is a growth market

Data from OAG for the first six months of 2019 indicate a modest slowing of the Ireland seat growth rate to 5.0%, but this is still above Western Europe's 4.5% increase in 1H2019.

Total visitor arrivals to Ireland increased at a similar rate: 6.9% in 2018.

Of the 10.6 million arrivals, 3.8 million were from the UK and a similar number were from the rest of Europe. There were 2.4 million from the US and Canada. Other countries accounted for only 6% of tourist arrivals in 2018. 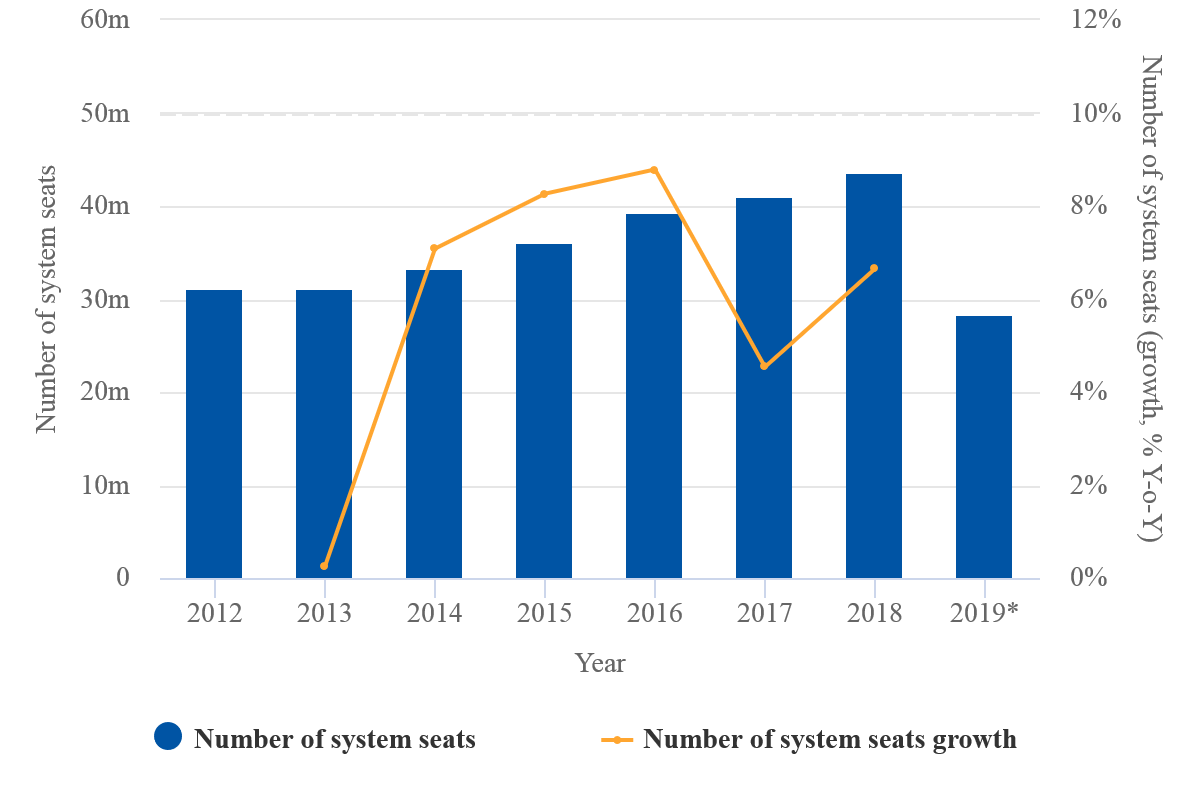 *The values for 2019 are at least partly predictive and are not complete.

Ireland's airline capacity is virtually all international (99.7% of seats in the week of 8-Jul-2019, source: OAG).

It is dominated by short/medium haul destinations, which account for 86.2% of international seats in Jul-2019, with Europe accounting for 83.8%, the Middle East 2.3% and North Africa 0.1%.

The UK is by far the biggest individual country market to/from Ireland, accounting for 31.4% of international seats.

Almost all of the long haul destinations from Ireland are in North America (13.2% of international capacity), with very low capacity to North East Asia and Central America.

Ireland is a connecting hub between Europe and North America

Ireland's geographic location between Europe and North America is a significant factor in its success as an aviation market. Its main airports, led by Dublin, are positioned as hubs connecting the two continents.

Ireland's natural advantage in this market has been further enhanced by supportive government policy. Among other things, this has helped Irish airports to lead the way in obtaining pre-clearance for US customs.

In summer 2019 Dublin will have 24 routes to North America. Shannon (seven routes) and Cork (one route) also have direct North Atlantic services.

Point-to-point traffic from Ireland to North America is strongly supplemented by connecting traffic from the UK and other countries in (mainly Western) Europe.

Dublin Airport handled 3.8 million trans Atlantic passengers in 2018 – a 16% increase year-on-year. Of these, 1.7 million used the airport for a connecting flight to North America from Europe.

Dublin is the dominant Irish airport

Dublin was Europe's 13th biggest airport by passengers in 2018.

Ireland's airports, Dublin in particular, also take traffic from across the border in Northern Ireland, where the two main airports are also much smaller.

Northern Ireland has only one regular (summer only) direct link to North America in the form of Virgin Atlantic's Belfast International to Orlando service, following the withdrawal of United in Jan-2017 and Norwegian in Oct-2018.

Ryanair and Aer Lingus have a near duopoly among airlines

While Ireland's aviation market has a dominant airport, the division of capacity is relatively balanced between its two leading airlines. Ryanair is the largest airline by seats overall in Ireland, with a 40.2% share in the week of 8-Jul-2019, but Aer Lingus is not far behind, with 35.2%. 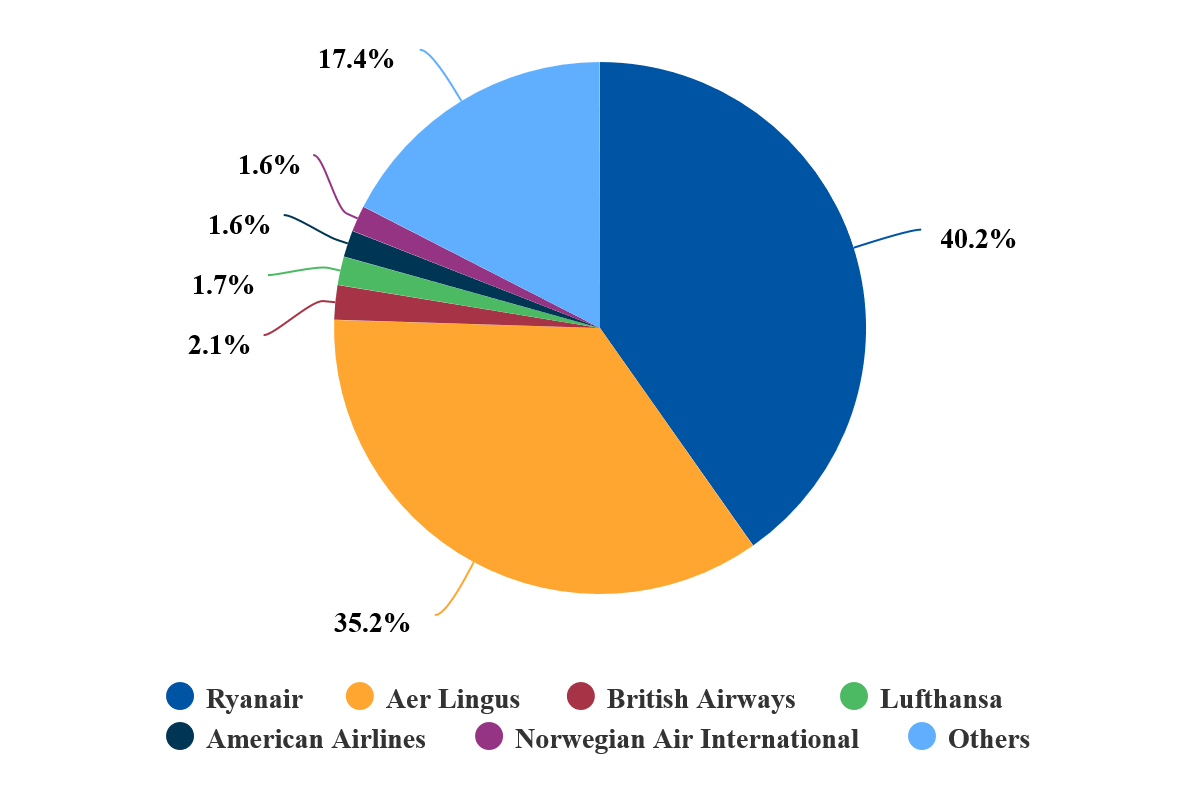 The vibrancy of Ireland's aviation market can be illustrated by the number of airlines operating: 47 in the week of 8-Jul-2019. This is the same number as a year earlier, but 17 more than five years previously.

The importance of the North Atlantic is demonstrated by the presence in the top 10 of all of the US big three (American, Delta and United, all with more than 1% of seats) and Air Canada at number 12 (Canada's Air Transat and WestJet are also present).

After the four large North American operators, the next biggest non European airlines by seats in Ireland are Emirates, Etihad and Qatar Airways. The three Gulf airlines are all in the top 20 and all have more than 0.5% of seats.

Ireland's lack of significant direct links to Asia Pacific and Africa means that for connections to these regions it relies on the big European hubs, particularly London Heathrow, and those of the Gulf super-connectors (together with that of Turkish Airlines, ranked at number 21).

Dublin to Heathrow is the biggest route to/from Ireland (based on seat capacity for the week of 8-Jul-2019), followed by Dublin to London Gatwick.

Ireland's significant cultural and economic ties with the UK are reflected not only in these two routes but also in the presence of Dublin to Manchester, Birmingham and Stansted in the top 10 routes from Ireland.

The size of the Dublin-Heathrow route also reflects its vital role in providing long haul connectivity to Ireland. Services from Dublin to Europe's other megahubs Amsterdam, Frankfurt and Paris CDG are also in the top 10 routes.

When IAG bought Aer Lingus it gave commitments about preserving the Irish airline's Heathrow slots. IAG ownership of both Aer Lingus and British Airways led to enhanced connectivity between the two airlines. 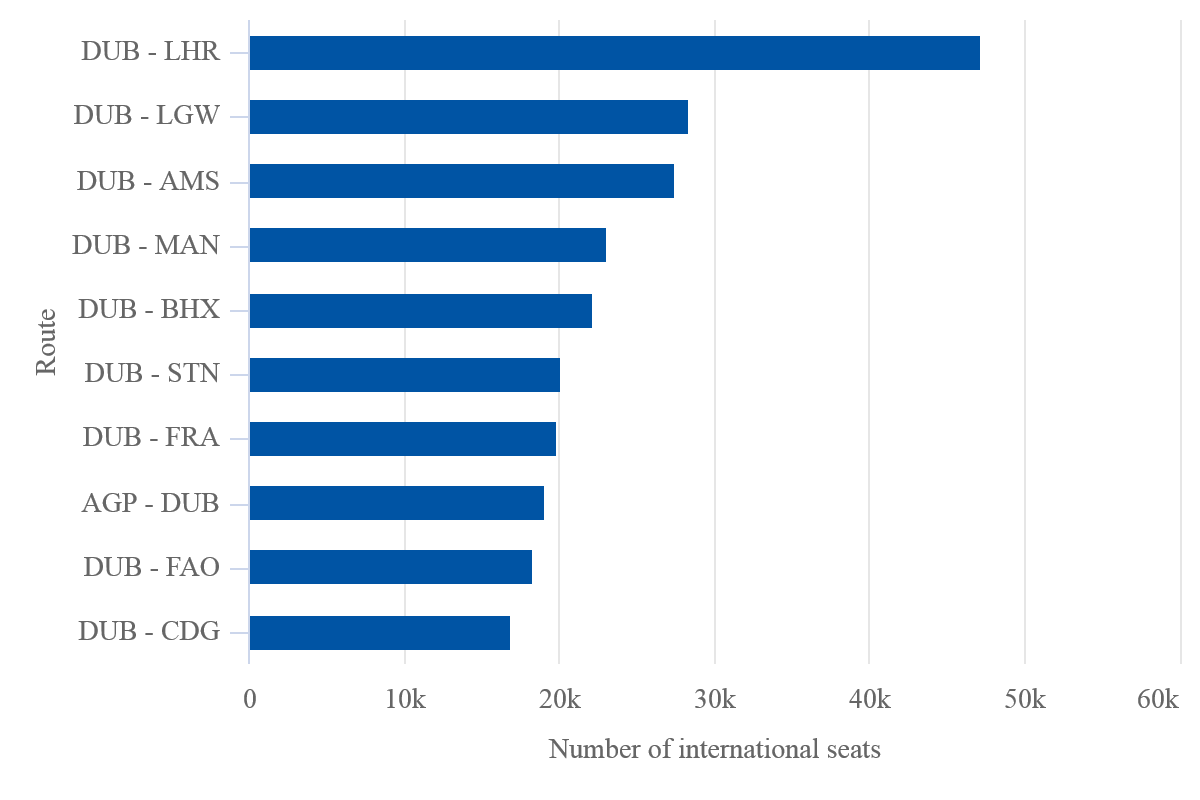 Aer Lingus has grown its share on North Atlantic routes

IAG has also encouraged Aer Lingus' growth on the North Atlantic, which was already a central part of its strategy before the 2015 acquisition. According to data from OAG, Aer Lingus' weekly capacity to North America in midsummer will be 165% higher in Jul-2019 than it was in Jul-2012. 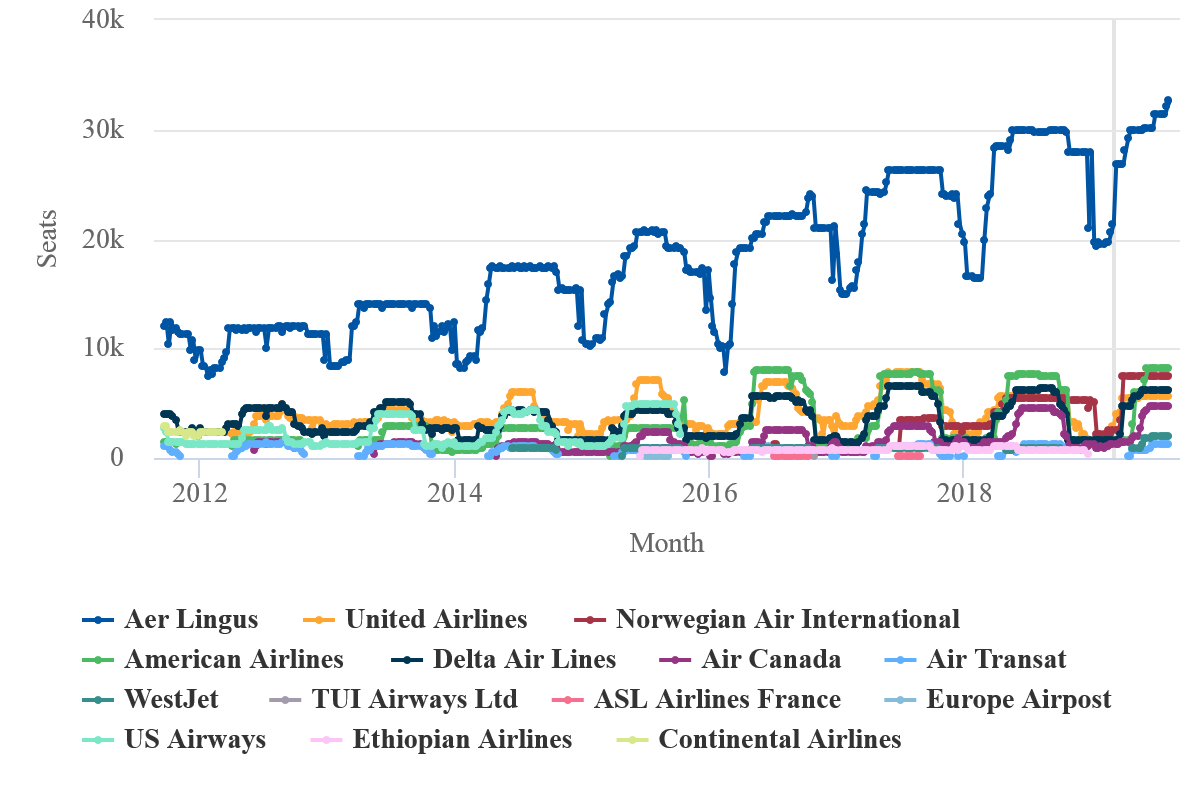 Aer Lingus aims to be the "leading value carrier across the North Atlantic".

In this respect its main competitors are the two Icelandic connectors, the LCC WOW air and national airline Icelandair, and the LCC Norwegian, which is a nonstop operator between Europe and North America (although its Irish services also compete for connecting traffic).

When account is taken of Aer Lingus' average trip length, the airline has a significantly lower unit cost than most European legacy airlines (including Icelandair), but one that is higher than LCC levels.

Its main advantages over LCC competitors lie in its better network connections (both in Europe and North America, whether with its own capacity or with partners), greater cabin and service options, and stronger financial backing from IAG.

Aer Lingus plans to increase its North Atlantic ASKs at a CAGR of 11% pa from 2018 to 2023 and take its seat capacity in this market from 2.8 million to 4.7 million. Almost two thirds (63%) of its growth will be in established markets, through adding frequencies or upgauging.

Aer Lingus' growth under IAG has not been at the expense of profitability. In 2018, Aer Lingus achieved a return on invested capital of 26.8% and an operating margin of 15.1% – both measures being the highest in the group.

Ryanair is Europe's largest and most profitable airline

Ireland's standing in aviation has benefited hugely from the success of the ultra LCC Ryanair.

Ryanair is Europe's largest individual airline brand by passenger numbers (139 million passengers in 2018) and is consistently its most profitable by operating margin (forecast to be 15.4% in the financial year to Mar-2019, according to Thomson Reuters).

Ryanair has achieved this through an acute focus on low costs and by being one of the first to take advantage of European aviation liberalisation to establish bases elsewhere in Europe (particularly, early on, in the UK).

Ireland will continue to punch above its weight

The mix of natural advantages and a liberal policy stance have been major factors in the success of both Aer Lingus and Ryanair.

Ireland's natural advantages in aviation have formed the strategic kernel for the growth of Aer Lingus in recent years, both before and since its acquisition by IAG.

The size and strength of the Dublin-London market have certainly provided a solid base for Ryanair's growth, but its success owes less to Ireland's natural advantages when compared with Aer Lingus. Nevertheless, it too has benefited from Ireland's liberal aviation policies.

Irish aviation looks set to continue to punch above its weight. It offers a good model to emulate.