Several of the world’s international airlines could be nearing breaking point, as figures show passenger revenues are declining by around 20% year-on-year, while costs remain stubbornly high.

The world’s airlines experienced an 11.1% reduction in international passenger traffic (RPKs) last month, but cut capacity by only 4.4%, resulting in a 5.4 ppts reduction in passenger load factor to 72.1%, according to IATA. The industry body estimates that international revenues declined by up to 20%. If declines of this magnitude continue for much longer, The Centre expects several airlines could be driven to the brink.

IATA stated the shift in Easter from March in 2008 to April in 2009 negatively distorted March 2009 passenger demand by about 2%, leading to an underlying fall in March demand of 9%. This shows a continued decline from February of about 1% (after February figures are adjusted for the impact of the leap year). 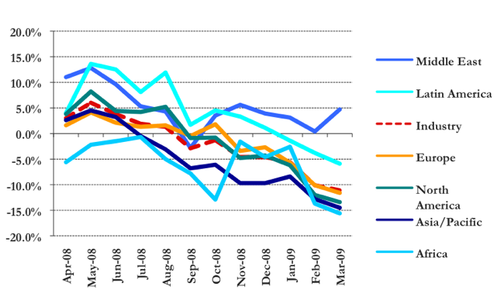 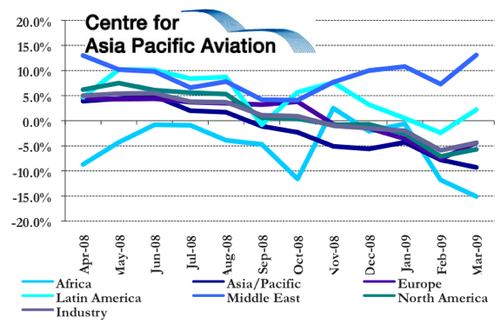 Swine flu could not some at a worse time

IATA stated it is working in close cooperation with the World Health Organisation to ensure an “efficient response” of the air transport industry. IATA Director General & CEO, Giovanni Bisignani, stated that while it is still too early to judge what the impact of Swine Flu will have on the industry’s bottom line, “it is sure that anything that shakes the confidence of passengers has a negative impact on the business”. He added, “the timing could not be worse given all of the other economic problems airlines are facing.”

Mr Bisignani observed that airlines “cannot adjust capacity to match demand. Load factors have dipped sharply from last year - all of this is hitting revenues hard”.

Freight finds a floor – in the cellar

Mr Bisignani added, “the only glimmer of hope is that cargo demand has stabilised this month [March], although at the shockingly low level of -21.4%” year-on-year. For the fourth consecutive month international cargo demand is “hovering in the -21% to -24% region, as a result of the sharp drop in world trade”, according to IATA. Mr Bisignani added, “it’s not the end of the recession, but we may have found the floor”. 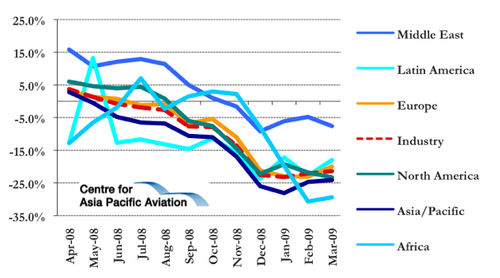 IATA noted the severity of air freight slump is at least partly driven by manufacturers seeking to correct large inventory overhangs that emerged in late 2008. It added, “the stabilisation of the inventory to sales ratio has in turn stabilised air freight demand. Recovery, however, depends on purchasing that can deplete the inventory overhang. Inventory levels remain high and final demand is weak”.

Carriers in the Asia Pacific region continued to lead the decline in demand, according to IATA, with a 14.5% fall in passenger traffic (RPKs), outstripping a 9.3% downward adjustment in capacity. IATA stated the region is “particularly impacted by the fall-off in long-haul travel, which is contracting faster than short-haul” – where members face intense competition from rapidly expanding LCCs. The Centre estimates Asia Pacific airline losses reached USD10 billion last year – a figure which could be matched this year.

Also of concern to the Asian carriers is the aggressive growth in capacity by rivals in the Middle East. Middle Eastern carriers were the only ones to experience growth in March (4.7%). This is an improvement from the 0.4% growth in February, and represented an expansion of market share, but IATA stated, “this was out of balance with the 13.1% increase in capacity”.

(For comprehensive daily coverage of American aviation developments direct to your inbox, sign-up now for a complimentary subscription to America Airline Daily. 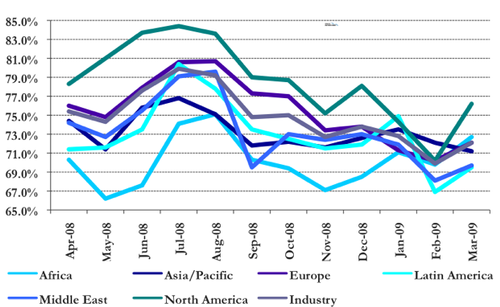 The industry body added the European carriers saw their international demand fall by 11.6% last month, with consumer confidence “dented by unemployment in key markets such as Germany and Spain, which increased to 8.6% and 17.4%, respectively”.

Mr Bisignani urged governments to move forward with liberalisation - particularly of the “archaic ownership restrictions that prevent cross-border access to capital and consolidation”. On taxation, he again singled out the UK Chancellor’s move to raise the UK Air Passenger Duty as an example of governments seeing aviation as a “cash-cow”, instead of using airlines to drive economic growth and development.

Bisignani stated, “when the government should be doing everything possible to stimulate the economy, it makes no sense to dampen demand for air travel with increased taxation. Look no further than the Netherlands where collecting an extra EUR 312 million in extra revenues with a new departure tax cost the economy up to EUR 1.2 billion in lost revenue. The Dutch had the good sense to abolish the tax. Let’s hope that others will follow”.

African carriers showed the weakest performance in March with a 15.6% fall in demand. But they did the best job at matching capacity to demand with an aggressive cut of 15.1%. While cross border travel within Africa grew during February, African carriers continued to lose market share, according to IATA.

Latin American carriers increased capacity by 2.2% as demand fell by 5.9%. Travel to and from Central America and from Latin America to North America was “particularly weak”.

Outlook: The next crisis is...de-leveraging

The airline industry is struggling to digest last year’s record fuel prices and the unprecedented fall in demand from the worst global economic crisis since the Great Depression. The uncertainty generated by the Swine Flu outbreak is another unwelcome development.

But a deeper problem faces the sector. According to Mr Bisignani, recovery in the air transport sector rests on a rise in consumer confidence and consumer spending. He observed that the shedding of debt by consumers would be a “major headwind”. Mr Bisignani stated, “US households, for example, are leveraged at 130% of annual income. Even bringing this down by 5% erases USD500 billion in consumer spending. The challenge for governments is to turn stimulus funds into spending that fuels trade”.

One glimmer of positive news is that US consumer sentiment has shown signs of improvement this month, although the survey was conducted before the Swine Flu outbreak gathered momentum.