Shares in New Zealand’s Infratil fell 1.7% yesterday as the infrastructure operator contemplates selling its majority stake in Germany’s Lubeck Airport, according to the European Commission. When Infratil purchased the airport from the City of Lubeck in 2005, it was given an option requiring the city to buy back Infratil’s stake if the airport handled less than 2.1 million passengers p/a. The underperforming airport handled just 540,000 passengers in 2008.

Shares in the major European airport operators remained positive yesterday, although lower than the previous trading day. Fraport’s shares rose 2.4% as the group enters the final stages in its bid for the concession to develop, modernise and operate St Petersburg Airport Pulkovo Airport (see below).

Aeroports de Paris’ shares gained 0.8%, in line with the Paris CAC index (+0.9%) following the release of its Jun-2009 traffic results:

Meanwhile, Vienna Airport’s shares eased 0.3% yesterday, despite the launch of Blue Air’s three times weekly service from the airport to Suceava in Romania (see below).

Shares in Macquarie Airports and Australian Infrastructure Fund rose 2.3% and 2.8%, respectively, on the back of a 1.8% gain in the Sydney ASX 200 index. 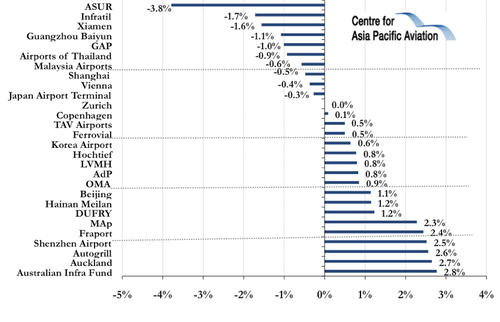 The Chairman of Fraport AG, Professor Dr Wilhelm Bender, and the Governor of the city of St Petersburg, Valentina Matvienko, have signed a memorandum of understanding (MoU) in the presence of German Chancellor, Angela Merkel, and the Russian President, Dmitri Medvedev, to bring a conclusion to the negotiations concerning the concession contract for the development, modernisation and operation of St Petersburg Pulkovo Airport facilities.

The declaration of intent provides Fraport AG the best chances of taking over responsibility for the operation of Russia's fourth largest airport, Pulkovo, from 2010. The city of St Petersburg, the current owner and operator of Pulkovo Airport, named the "Northern Capital Gateway" consortium, in which Fraport holds a 35.5% stake, as the preferred bidder at the end of Jun-2009, after an international call for tenders.

Mr Bender stated "the signature of the MoU is another clear signal, which makes me confident, that the Fraport consortium will be awarded the contract in the end, after the final negotiations. We want to put our worldwide recognised expertise to work to make Pulkovo Airport the main transport node in one of the best-loved Russian tourist areas and to build on and operate the continually growing Russian air travel market. The signature of the memorandum forms a solid basis for successful cooperation between the companies within our consortium and the city of St Petersburg."

The concession contract for the development, modernisation and operation of the airport in Russia's second largest metropolis is set to be signed by the end of the year and will run for 30 years. The first phase of the concession involves of the construction of a new passenger terminal, the expansion of the apron, property development on the adjacent airport area and the modernisation of the existing infrastructure.

Pulkovo Airport handled 7.1 million passengers in 2008, making it Russia's fourth biggest airport. It has showed continuous growth in passenger numbers over the last few years. Facilities include two independent takeoff and landing runways and both a domestic and international passenger terminal.

Vienna International Airport is expanding its offering of destinations in Eastern Europe with the launch of Blue Air’s three times weekly service from the airport to Suceava, a city located in the north of Romania on 15-Jul-2009.

The new destination will further expand the position of Vienna International Airport as a hub to Eastern Europe and the Middle East. With a total of 49 destinations, Vienna offers the most connections to the East European region.