Indonesia’s Lion Group is preparing to build up its presence in the international market after focusing almost entirely on domestic operations in its initial 15 years. Lion is the largest domestic airline group outside China and the US, but has a small international operation that is only about the size of Poland’s LOT.

In a precursor to international expansion, the group has been raising its standards and seeking IOSA certification for all five airlines in its portfolio. Its Indonesian subsidiaries are also now in the process of securing an exemption from the EU blacklist.

IOSA certification and EASA approval should make it easier for the airlines under the Lion Group to secure approval from civil aviation authorities in several countries. It should also strengthen the Lion brand overseas and facilitate new codeshare partnerships.

Lion is predominantly a domestic airline group, unlike AirAsia

Lion is one of the world’s 15 largest airline groups based on current seat capacity. The Lion Group currently has more than 1.7 million weekly seats, making it the largest in Southeast East – ahead of AirAsia’s approximately 1.4 million weekly seats.

However, Lion has a larger concentration of domestic capacity than any of the other top 15 airline groups except Southwest Airlines. Approximately 93% of Lion Group’s seat capacity is now domestic, according to CAPA and OAG data. 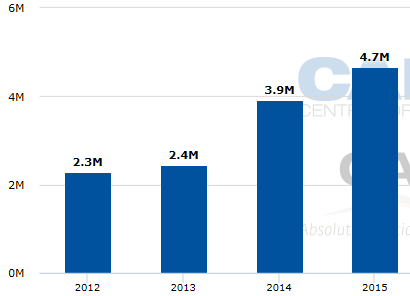 Malindo commenced operations in Mar-2013 and has been focusing its expansion almost entirely on the international market over the last two years, after an initial phase focused on the domestic market. Malindo currently operates 21 international routes, nine of which have been launched over the last year, and is planning further ambitious international expansion in 2H2016.

The rest of the group currently operates only 10 scheduled international routes. This includes eight for Lion Air, one for Thai Lion and one for the Indonesian full service subsidiary Batik Air. The group’s fifth airline, Wings Air, is a regional operator in Indonesia and only serves the domestic market.

Batik, Lion and Thai Lion are all planning international expansion in 2016. Thai Lion has the most aggressive plan, aiming to launch several international routes within Southeast Asia and to China over the next few months. Thai Lion commenced operations in Dec-2013 and focused in its initial phase on the Thai domestic market, where it has quickly built up a presence that is already almost as large as the long-established LCCs Nok Air and Thai AirAsia.

In Indonesia, the Lion Group strategy is generally to use the full service subsidiary Batik to expand in the international market. Batik launched its first international route, Jakarta-Singapore, in Aug-2015 and has Perth in its business plan for 2016. It is planning to accelerate international expansion in 2017 as it takes delivery of new longer-range A321neos.

All Lion Group airlines should be IOSA-certified by Sep-2016

The Lion Group clearly faces challenges in establishing a significant international presence. The group and its various airlines do not have known brands outside their home markets, and the group's reputation overseas has also been far from stellar.

Lion Group has been gradually working to raise its standards and improve its reputation. An initiative to certify all of its airlines under the IATA Operational Safety Audit (IOSA) began in 2014, following the establishment of a new corporate safety and quality team.

Thai Lion became the first airline to pass an IOSA audit in Sep-2015. Thai Lion was selected as the first Lion Group airline to go through the stringent IOSA process as it is the newest member of the group and was therefore the easiest at which to implement change.

The other four airlines are now in various stages of the IOSA certification process. Batik and Malindo are expected to be added to the IOSA registry within the next couple of months, followed by Lion Air in Jul-2016 and Wings Air in Sep-2016.

IOSA certification to help the Lion Group establish itself internationally

IOSA certification is a key milestone in Lion Group’s initiative to establish itself internationally, for several reasons.

From a regulatory standpoint, IOSA certification can make it easier to secure approvals from various authorities. For example, Batik is now in the process of seeking approval from Australia’s Civil Aviation Safety Authority.

IOSA certification is also often a requirement for codeshare agreements with other airlines. No Lion Group airline currently has any codeshares with airlines outside the group.

However Malindo is now actively seeking to partner with several foreign airlines serving Malaysia, as part of its new full service airline strategy. Over the next couple of years other Lion Group members are also expected to start exploring partnerships with airlines outside the group.

IOSA certification is also a benefit because some corporates have policies requiring employees to fly with airlines on the IOSA registry. In addition, individual consumers often opt for IOSA certified airlines. As a result, IOSA can help Lion attract more international passengers and operate international routes that may only be viable with a heavy concentration of inbound traffic.

Lion Air could be removed from EU blacklist

An exemption from the EU blacklist will further aid Lion’s international efforts, since some authorities – and some corporates – follow EASA more closely than IOSA. Removal from the blacklist would also clearly help from a consumer standpoint.

Lion found itself blacklisted through no fault of its own. EASA automatically put all Indonesian airlines on its blacklist several years ago when it determined that Indonesian authorities did not meet its standards. Airlines are able to be removed individually after applying for an exemption and undergoing a rigorous process. For example, AirAsia Indonesia and Garuda Indonesia are currently exempt from the EU blacklist after following this process.

In Nov-2015 Batik, Lion, and the Garuda budget subsidiary Citilink applied for removal from the EU blacklist. A review by EASA is now under way, with a decision on all three airlines expected in Jun-2016.

If the Batik and Lion applications are successful, the Lion Group also plans to begin the process of seeking an exemption for Wings Air.

The certification work under IOSA and EASA is part of a wider initiative to raise standards, which should in turn help Lion boost its international profile.

Separate projects are under way to improve several other areas of the operation, including on-time performance. Only approximately 80% of Lion Air flights are on time. Batik has had a much more reliable operation since launching, with an average on-time performance of nearly 99%, as have Malindo and Thai Lion.

The Lion Group clearly recognises that it needs to raise its standards if it is to succeed at improving its brand overseas and expanding internationally. Lion strategically needs a much larger international presence as it takes delivery of the approximately 500 aircraft it has on order.

There are huge challenges to overcome, but there is also huge potential for the Lion Group in the international market.