It has been said that if Uganda’s infrastructure were to be improved, its resources could feed the entire African continent. Instead, the nation is one of the poorest and least developed countries in the world. However the potential for further development is undeniably present, and this is what has drawn large international airlines to enter the market. British Airways, Emirates, EgyptAir, KLM and South African Airways have been in the market for years, but it is the entry of Middle Eastern carriers such as Gulf Air and Qatar Airways in Oct-2011 through Dec-2011 that is boosting the nation’s aviation standing.

The country’s main international airport in Entebbe expects to break 1.5 million passengers in 2011 due to these services and is undergoing extensive improvement work to attract more carriers. The Ugandan Government approved the right for foreign investors to develop the airport, which will likely see a consortium of Middle Eastern developers take interest. The country’s designated national carrier, Air Uganda, is improving its offering as well, and is on course to launch domestic and more international services under its turnaround business plan.

While neighbouring Rwanda sees 18,000 seats per week, the Democratic Republic of the Congo 15,000 and Burundi just 6,500 seats per week from four carriers, Uganda’s weekly seat capacity sits at over 31,000. Many international carriers, including Emirates, British Airways, KLM, South African Airways and KLM Royal Dutch Airlines serve the country with A340 or similar aircraft. The country’s newest entrant, Qatar Airways, launched service to Entebbe from Doha on 01-Nov-2011 with A320 aircraft. Gulf Air will be the next carrier to begin service on 05-Dec-2011 with A320 equipment as well. In total, 21 carriers operate at the airport. Four of these (Qatar Airways, Rwandair, Turkish Airlines and Gulf Air) began their operations in 2011. 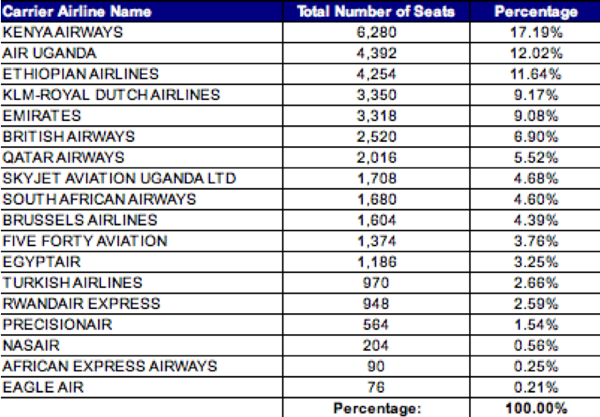 Qatar Airways, which holds a 6.5% share of the country’s international capacity, entered the market because it is politically stable and headed for greater growth with the discovery of oil reserves. CEO, Akbar Al Baker, is confident the route will be a success. More carriers are expected to enter the market in the upcoming years when the country establishes an oil refinery and begins exporting. According to the International Monetary Fund (IMF), Uganda’s GDP will grow 6.45% in 2011, 5.5% in 2012, and an estimated 7% from 2013 through 2016. The country’s population is currently 34 million people and this figure is expected to increase to 42 million by 2016. 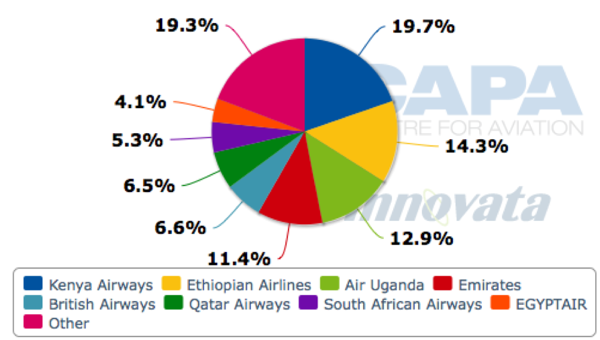 Uganda has substantial natural resources including fertile soils, regular rainfall, as well as small deposits of copper, gold and other minerals. Its economy has great potential and has been described as one of the fastest growing in Africa. Its main agricultural exports include coffee, tea, cotton, tobacco and corn. Its largest import partners include Kenya, the UAE, China, India, Japan, South Africa and Germany.

The recent discovery of oil in 2006 is expected to give the country the economic boost needed to send it into the strata of middle-income countries. Oil will start pumping within the next few years and with it comes industrialisation and infrastructure investment. Trade between Uganda and the UAE has been increasing year on year since the discovery, while Saudi Arabia, Bahrain, Egypt and Algeria remain strong trading partners.

Arrivals to Uganda have been increasing except for in 2009, which saw levels slightly lower than in 2008. While the reason for arrival is not released by the Uganda Bureau of Statistics, travel for business is likely to see an increase in the coming years. The figures below include tourists, business arrivals and refugees.

Most of Uganda’s arrivals come from Kenya, Ethiopia, Rwanda and South Sudan, although many of these arrivals come seeking refugee status. The Netherlands, UK, Belgium and Turkey are European countries with strong visiting populations.

Business class seats at Entebbe International Airport accounts for 11.3% of the total capacity at the airport, which is well above the 5.1% worldwide average. This highlights Uganda’s status as a business destination. Capacity of first class seats is slightly below the worldwide average of 1.6%. 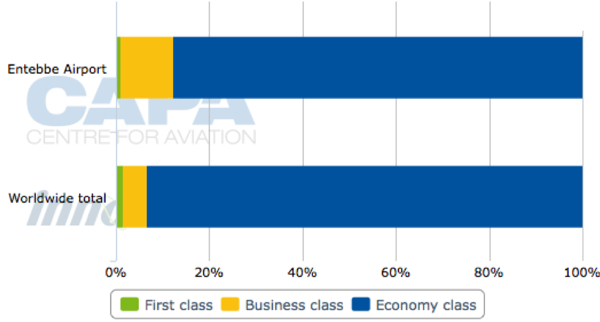 Areas in Northern Uganda, such as the Muchison Falls (Kabarega Falls) National Park and Kidepo National Park are slowly becoming popular tourist destinations, and have been somewhat promoted by the Ugandan Government, however more investment in this area is needed. Kipedo National Park is reached via Kidepo Airport, which does operate scheduled services. The Muchison Falls National Parks is less connected and can be only be reach via charter services from private companies. Uganda’s tourism has the potential to increase even further if its infrastructure receives investment. The Ugandan Government needs to capitalise on the expected rise in visitor numbers and put investment into tourism as well as business and oil.

Entebbe International Airport is expected to break 1.5 million passengers by the end of 2011. In 2007, the airport recorded 720,000 passengers and in 2009, 930,000. 2010 saw the airport break the one million passenger mark and this figure will continue to rise as new capacity is added. The increase however has put strain on the airport’s limited space and outdated facilities. Officials are concerned about space for aircraft, cars and cargo handling. While pressure continues to mount on the airport’s lack of resources, the Civil Aviation Authority (CAA) is unwilling to turn away new airlines due to their desire to increase revenue.

In 2004, Entebbe International Airport began a USD100 million improvement project, which is designed to enable the airport to handle up to two million passengers per year through the construction of a new terminal. Progress here has been slow with the project remaining largely incomplete, which puts pressure on resources and hinders Uganda's growth prospects. Nevertheless the project has received international interest from the Changi Airport Group (Asia) and Dodsal Infrastructure Development (Middle East). China has loaned Uganda funds to complete the airport’s road connector project, which is still ongoing. Planned runway improvements will enable the airport to receive A380 aircraft, however work on the runway has not yet commenced.

The CAA also began work on a USD24 million Entebbe International Airport cargo project in 2004 but again, little progress has been made here. The project includes the construction of a new cargo centre with perishable and dry cargo buildings, freight forwarders building, customs building and truck off-loading area. It is unknown when this project will be completed.

While Entebbe International Airport is receiving investment and upgrades, albeit inconsistent and slow, Uganda’s remaining 45 other airports are not undergoing any improvements. Only five have paved runways and six have scheduled commercial services: Arua Airport, Entebbe International Airport, Gulu Airport, Abjumani Airport, Kidepo Airport and Moyo Airport, according to Innovata. The northwest of the country, which is home to Arua Airport, Gulu Airport, Abjumani Airport and Moyo Airport, is well connected however the rest of the country remains un-reached by scheduled air service, creating a heavy dependence on the Albert Nile and highways. These airports handle only domestic capacity, and are served by local carrier Eagle Air. 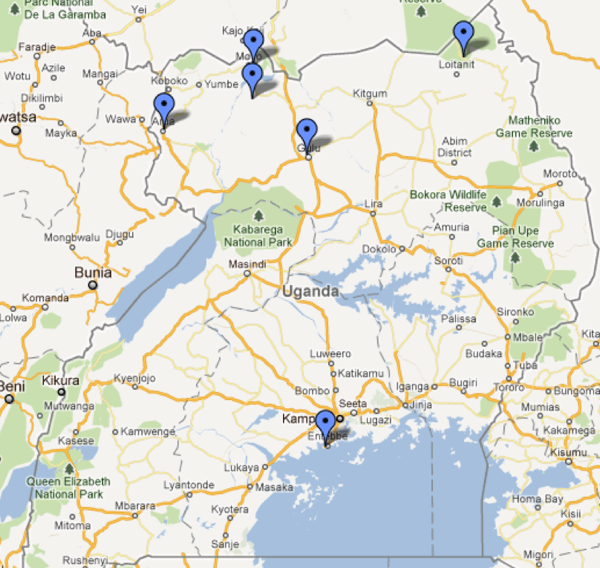 The story of Ugandan national carriers is largely an unsuccessful one. The nation’s official national carrier, Uganda Airlines, was liquidated in May-2001 after 24 years of operations. Attempts were made by the Ugandan Government to privatise the company however all interested parties, which included British Airways and South African Airways, pulled out, leading to the carrier’s demise. Uganda Airlines was established to replace the services operated by East African Airways – an airline run jointly by Kenya, Tanzania and Uganda – when it dissolved in 1977. The failure of Uganda Airlines was caused by mismanagement during the 1990s and weak demand.

After six years of no national airline, Air Uganda was established as the “designated” national carrier for Uganda in 2007. The carrier operates a regional network that covers Kenya, South Sudan, Tanzania and Burundi. Its first destination was to Kigali in neighbouring Rwanda, at a time when Rwandair was still trying to establish itself. Ugandan officials did not think of Air Uganda’s entry into Rwanda as competition, as initially the carriers operated their schedules at different times. Collaboration has improved since the establishment of a codeshare agreement in Sep-2010. Air Uganda now operates to Kigali with a daily frequency. 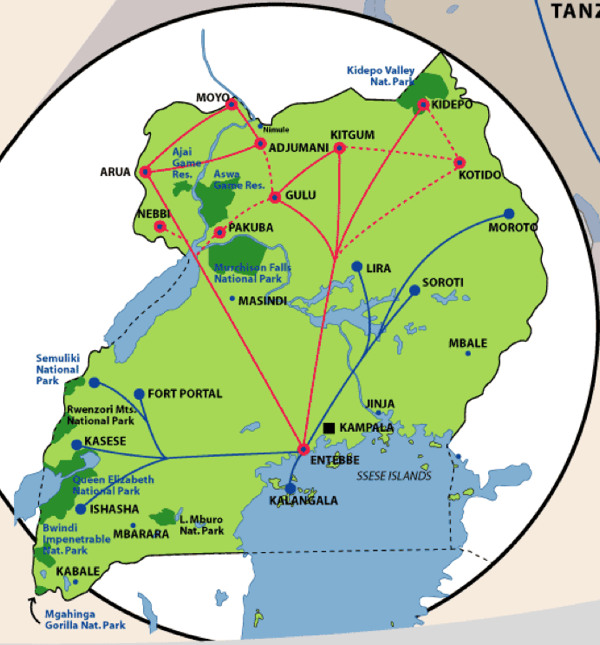 Air Uganda’s 2012 schedule is said to include some of these planned new destinations however the company is still studying the commercial viability of these services and has not yet released details about destinations. Air Uganda has already announced plans to increase service to Juba in South Sudan and Mombasa in Kenya.

Pan-African carrier Fly540, 49% owned by transport and mining conglomerate Lonrho Group, operates into Uganda from its Nairobi International Airport base. Fly540 has an established network in Kenya and would like an “equally strong network in Tanzania and Uganda”, according to Fly540 operations director, Nixon Ooko. Lately Fly540 has been focused on establishing operations in Angola (under the brand Fly540 Angola) and this has been a long and arduous process. Fly540 Uganda is responsible for the 3.4% of LCC capacity in Uganda. Fly540 Uganda needs to establish its domestic low cost operations in order to bring down the cost of travel within the country, which is unaffordable for most Ugandans. 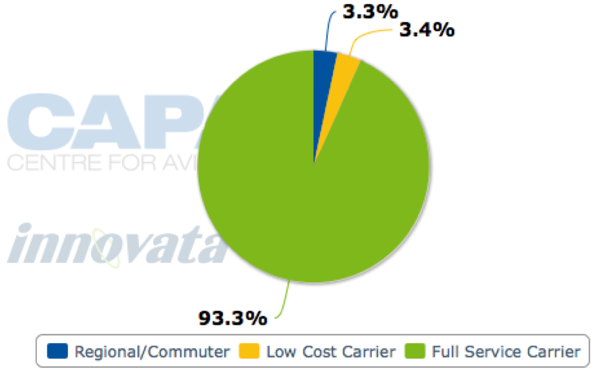 Uganda’s growing tourism industry, bright economic prospects and discovery of oil are helping it to become an attractive destination. With a wealth of international carriers operating there, and more coming, the country is likely to see increased capacity and tourism growth well into the future. The added competition is expected to break the dominance held by Emirates, British Airways and KLM, as well as increase the quality of service and affordability. The service and cost of domestic travel is set to improve as well, when Air Uganda and Fly540 commence their domestic operations.