It is better than the 25% reductions reported by Incheon in Dec-2008 and Jan-2009, but the depressed cargo volumes reflect ongoing weakness in the underlying global economy. 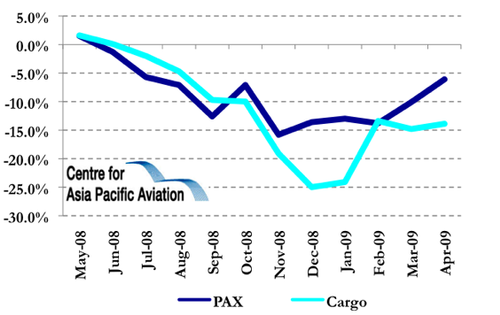 Recovery could be hit by rising fares

Passenger numbers at Incheon have started to climb back slowly from lows established in Nov-2008, but recovery could be hampered by the swine flu outbreak, which has hit Japan hard in recent days, as well as moves by Korean Air (KAL) and Asiana Airlines to raise their international fares from next month to cover rising costs and the weak Korean won.

KAL is meanwhile increasing services to China (including new routes to Xi’an and Mudanjiang from 27-May-09 and 02-Jun-09 respectively. It is also ramping up codesharing with Japan Airlines on services to regional airports in Japan.