Iceland’s WOW Air to expand rapidly in 2017, pushing up LCC penetration on the trans-Atlantic

Iceland’s WOW Air is planning more rapid growth in 2017 as it adds seven aircraft and continues to expand its North Atlantic operation. WOW’s new routes to Los Angeles and San Francisco will be upgraded to daily while Miami will be launched, giving the LCC eight North American destinations.

WOW launched services in 2012 and only began serving North America in 2015. The LCC has successfully stimulated demand in a market dominated by full service airlines, particularly airlines in immunised trans-Atlantic joint ventures.

WOW expects the trans-Atlantic market can support significantly more LCC capacity and potentially an LCC penetration rate of up to 40% compared to only approximately 5% currently. WOW also has been growing in Europe mainly with additional capacity to existing destinations that is supported with transit traffic growth to North America.

WOW currently operates 20 routes, connecting its Reykjavik hub with seven destinations in North America and 12 destination in Europe. It has launched nine routes over the last year including five in Europe (Barcelona, Bristol, Edinburgh, Grand Canaria and Frankfurt) and four in North America (Los Angeles, Montreal, San Francisco and Toronto). WOW has one more route launch planned for 2016, with service to New York/Newark commencing in late Nov-2016.

Over the last year WOW also has increased capacity on seven of its 11 existing routes - Amsterdam, Baltimore/Washington, Berlin, Boston, Copenhagen, Dublin and Paris. Only London Gatwick, Alicante and Tenerife have not experienced increases (based on OAG data for the first week of the winter season in 2015 and 2016).

Gatwick was already served with more than one daily flight while Alicante and Tenerife are small low frequency outbound focused markets. Amsterdam, Baltimore/Washington, Boston and Copenhagen are now served daily while Gatwick has 11 weekly flights. Baltimore/Washington and Boston were WOW’s first two North American destinations, having been launched in summer 2015.

New York/Newark will also be served daily when it is launched in late Nov-2016. WOW recently announced that Los Angeles and San Francisco will be upgraded to daily from the start of the summer 2017 season in Mar-2017. Miami will be launched in early Apr-2017 with three weekly flights while Toronto and Montreal will be maintained at the current schedule of four weekly flights.

WOW will therefore operate 46 weekly flights to North America in Apr-2017 compared to only 12 weekly frequencies in Apr-2016. Seat capacity will be up nearly fivefold year over year in Apr-2017 to approximately 11,600 weekly one-way seats. 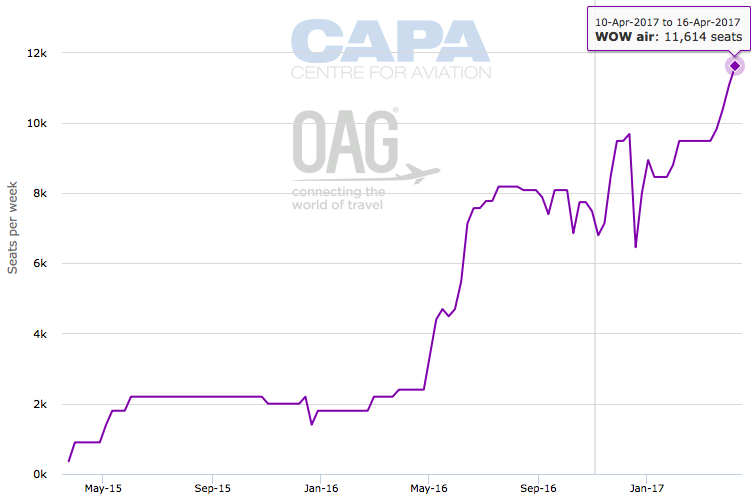 WOW Air to add another seven aircraft in 2017

WOW currently operates two A330-300s and eight A320 family aircraft, including six A321s and two 180-seat single class A320s, according to the CAPA Fleet Database. The A320s are used entirely for Europe as well as some of the A321s.

WOW Air founder and CEO Skuli Mogensen told CAPA TV on the sidelines of the 27-Oct-2016 ACTE-CAPA Global Summit in Amsterdam that the airline plans to grow its fleet to 17 aircraft in 2017. “We are not stopping there. You will continue to see WOW grow significantly,” he said.

Mr Mogensen declined to say how many A330s will be added to support growth on longer routes but said: “We have large plans for our widebody fleet so you will continue to see us expand.” He added that WOW Air intends to maintain an all Airbus fleet and “whatever Airbus has in the pipeline we will happily look at”.

Currently WOW has commitments for four additional A321ceos as well as two A321neos and one A320neo. The A321neos will give WOW an opportunity to reach deeper into North America with its narrowbody fleet but the airline will still require additional widebody aircraft.

Los Angeles and San Francisco are approximately nine hours from Reykjavik, making them too long for even the A321neo. Reykjavik-Miami is scheduled at eight hours, which is also likely too long for the A321neo in high density all economy configuration.

Widebodies would also be required for Asia, which WOW has reportedly been considering.

Mr Morgensen said in the CAPA TV interview that WOW has experienced load factors above 90% from the start on all of its North American routes but “Los Angeles and San Francisco have been particularly good”.

Mr Morgensen believes there is an opportunity in the trans-Atlantic market to support significantly more capacity from WOW, and LCCs generally. Currently LCCs account for only approximately a 5% share of seat capacity between Europe and North America.

“The low cost model has been extremely successful domestically across Europe, domestically across North America, Asia, etc but it’s really new on the trans-Atlantic longer haul routes,” Mr Morgensen told CAPA TV. “I don’t see why that should be the case. On the contrary I think the low cost model will become very successful also on longer flights.”

He added that LCCs should eventually be able to account for at least 20% - and perhaps 30% or 40% - of the trans-Atlantic market.

Norwegian and WOW are the main LCCs players over the North Atlantic, accounting for approximately 2.6% and 1.1% of Europe-North America capacity in winter 2016/2017 (based on OAG data). Their trans-Atlantic launch and rapid growth have shaken up the market but the three immunised JVs still dominate the Europe-North America market, accounting for over 70% of capacity.

Norwegian and WOW have driven growth in what was a relatively mature market by offering much lower fares than the incumbents. “What we see when we add our low cost option into the mix it will actually stimulate and grow the market significantly,” Mr Morgensen said.

WOW has attracted a mix of price sensitive leisure passengers booking their trips months in advance and budget conscious business travellers looking for a cost effective option for a last second trip that would otherwise cost well over USD1000. Mr Morgensen said during an LCC panel discussion at the Global Summit that last minute sales on North America-Europe city pairs have become a large component of Wow's business.

Mr Morgensen also said that WOW is constantly adjusting its focus from one North America-Europe city pair to another depending on competition. If full service network airlines are aggressive with fares it will not adjust its pricing model and simply rebalance its network to fill up seats to a certain European destination from another North American city. “We won’t lower our prices to compete with network carriers,” Mr Morgensen said.

He added that WOW has the advantage of being nimble and is able to quickly change its product or pricing when necesssary. “Legacy carriers are very stuck in the current structures,” he said. “You need to be unafraid of testing things out.”

WOW continues to expand in Europe 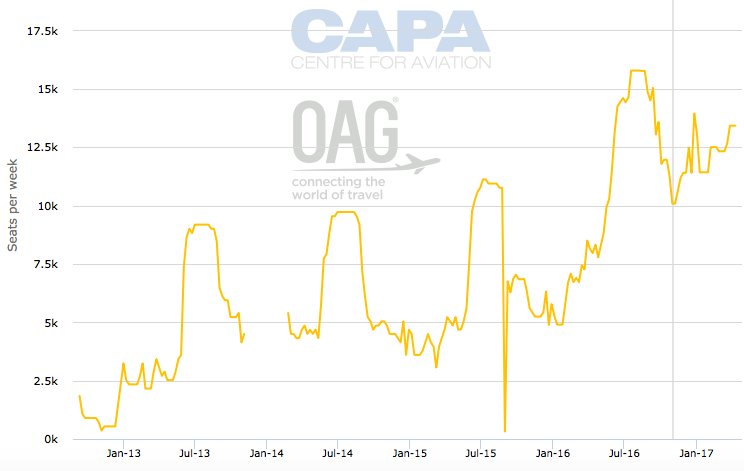 WOW plans to serve 11 European destinations in summer 2017. Four weekly seasonal services to Cork will be launched in May-2017 but Grand Canaria and Edinburgh are not currently included in the summer 2017 schedule.

However overall capacity to Europe will increase significantly as capacity will be added to several existing destinations. For example a second daily flight will be introduced to both Amsterdam and Paris at the start of the summer 2017 season in Mar-2017. Amsterdam and Paris have been popular destinations for trans-Atlantic traffic; while there is significant local traffic to/from Iceland in these markets it is unlikely a second daily flight could be supported without feed from North America.

Inbound tourism growth is partially driving the growth to Europe along with increasing sixth freedom traffic to and from North America. Visitor numbers to Iceland were up 29% in 2015 to 1.3 million. Visitor numbers have grown at a double digit clip for five consecutive years and have more than doubled since 2010.

The rapid growth in inbound tourism as well as the growth in transit traffic - from both WOW and full service flag carrier Icelandair - has led to infrastructure challenges at Reykjavik Keflavik Airport.

Passenger traffic at Keflavik doubled from 2010 to 2015, with growth accelerating to 26% in 2015. Through the first nine months of 2016 Keflavik already handled more passengers than in all of 2015, resulting in the airport operating above its designed capacity.

“We desperately need to see some investments and some strategic investments out of Iceland,” Mr Morgensen told CAPA TV. “Tourism is now the single largest contributor to the Icelandic economy so it’s hugely important. But I think Politicians are still catching up with this reality and they need to do a better job at setting the right policies and strategies to ensure we can continue to go in all directions.”

WOW is now looking at establishing a second hub outside Iceland, which would help it balance large seasonal fluctuations in its home market as well as potential capacity constraints at Keflavik. “Clearly the summer season is stronger so we are looking at new hubs that could essentially be counter seasonal to the trans-Atlantic market in order to optimise the use of our fleet and our people,” Mr Morgensen said.

Flexibility has been a key component of WOW’s strategy and initial success. The airline will need to remain flexible as it continues to grow.

As it rapidly expands its fleet and builds scale WOW should also be able to further reduce its already low unit costs. Mr Morgensen is determined to maintain a low cost base and stay true to the LCC model. He told the Global Summit that low costs are paramount, explaining that passengers are more value conscious and low fares are more appreciated than a few years ago.

WOW is also open to partnerships, which could support further growth in North America. WOW does not yet have any interlines or codeshares but Mr Mogensen said WOW “is seeing a lot of self-connectivity, primarily from the US”. Passengers are connecting from a wide mix of US airlines - both low cost and full service - with combined itineraries offered by Kayak and Skycanner.

WOW has quickly built up a presence in both Europe and North America and is starting to make some inroads in the trans-Atlantic market. However it is just starting to scratch the surface in what is a humongous market with very limited LCC penetration.