The main engine of Icelandair's growth continues to be its sixth freedom connecting traffic between Europe and North America. Most world map projections make its Reykjavik hub look like a major detour as a stopover, but a casual look at a globe shows it is not far off the great circle routes between many destinations in the two continents. This connecting traffic strategy is supported by strong inbound tourist demand to Iceland.

In order to make one-stop routes attractive against direct flights, Icelandair must be price competitive. It has continued to grow its profits in spite of LCCs' taking an increasing share of seats to/from Iceland in recent years. However, unit revenue is likely to remain under strong downward pressure, particularly given a number of competitor route launches in 2016 and Icelandair's plans to accelerate capacity growth.

Much of the improved profitability was due to lower fuel prices. Icelandair's fuel cost per ASK fell by 26% in 2015, according to CAPA calculations.

This double-digit EBIT margin puts Icelandair in rare company among European legacy airlines, although it is still behind the more profitable of the LCCs. Ryanair achieved an operating margin of 22.4% and Wizz Air made 16.5% in calendar 2015, while easyJet's margin was 14.7% for the year to Sep-2015.

The majority of legacy airlines have yet to report results for 2015, but Icelandair is likely to be one of only a very small number with a double-digit margin.

International network had ASK growth of 15%

The group's regional airline Air Iceland operates highly seasonal routes (summer-focused) in Iceland and Greenland and carried 296,000 passengers in 2015, up 1% year on year. Total scheduled ASK growth was 14%. The international network remains by far the main driver of the business.

Icelandair's growth of 18% in international passenger numbers in 2015 was not evenly distributed by market segment. The number of passengers flying between Europe and North America and connecting through Reykjavik (the 'via' market) increased at the faster rate of 21%, while traffic originating in Iceland (the 'from ' market) was up at the lower rate of 11%.

Traffic originating outside Iceland and travelling to the country (the 'to' market) grew by 18%, in line with the total. This was the strongest growth in the 'to' market since 2012 and was supported by the strength of inbound tourism.

The connecting passenger segment has grown faster than the other two segments for several years, providing a strategic cornerstone to Icelandair's rapid growth. From 2009 to 2015, total traffic increased 2.3 times, while the via segment grew 4.0 times and raised its share of total international passengers from 28% to 49%.

*To = pax with destination Iceland; From = pax with origin Iceland; Via = North Atlantic pax transiting via Iceland
Source: CAPA - Centre for Aviation, Icelandair

North America is the biggest point of sale 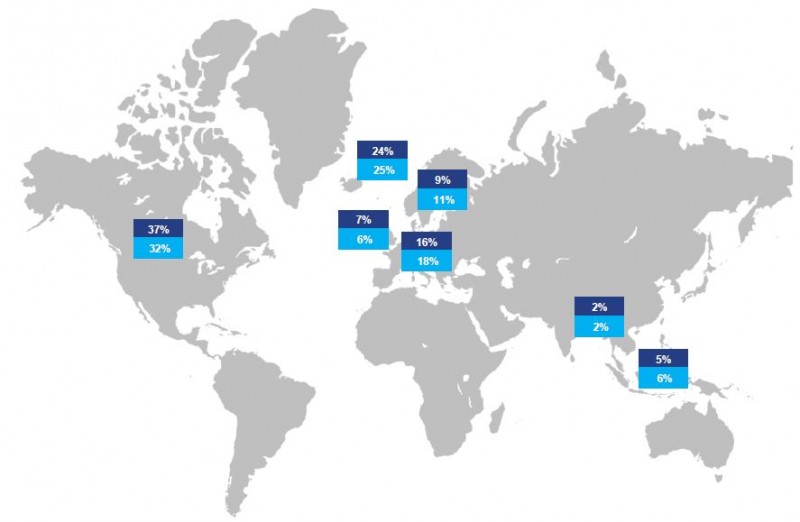 Iceland is often included in the Nordic region. However, the split of Icelandair's market segments and revenues put it in a different market than those of the Nordic region's principal airlines, SAS, Norwegian Air Shuttle and Finnair.

Both unit revenue and unit cost fell at double-digit rates

Icelandair's total revenue per ASK fell by 10% in 2015, according to CAPA calculations. Unit revenue was weakened by currency movements, but this decline in RASK also reflects the inherently competitive nature of a high-growth strategy based on attracting one-stop transfer traffic away from direct routes offered by competitors.

The group improved its EBIT margin in 2015 thanks to a more rapid fall in total cost per ASK, down 15%. This unit cost performance was helped by lower fuel prices, but ex fuel cost per ASK was down 11%, also a bigger fall than unit revenue.

Icelandair has experienced a fall in market share in recent years as LCCs have gained share. In the first week of Apr-2012 the Icelandair Group had 80% of seats to/from Iceland, whereas its share in the first week of Apr-2016 will be 59%. Over the same period, Icelandic LCC WOW Air will take its share from zero to almost 18%, and easyJet's share will grow from 4% to 8% (according to schedules data from OAG). 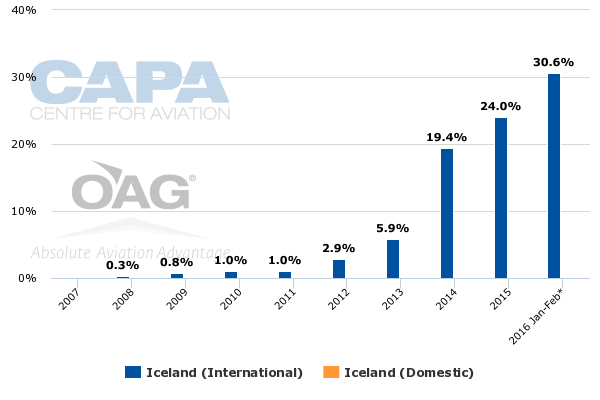 Yet competitor growth has grown the market

However, market share does not tell the whole story. Icelandair may have a smaller share than previously, but the impact of LCC growth has been to grow the whole market and Icelandair has also grown (albeit at a slower rate than the market overall). 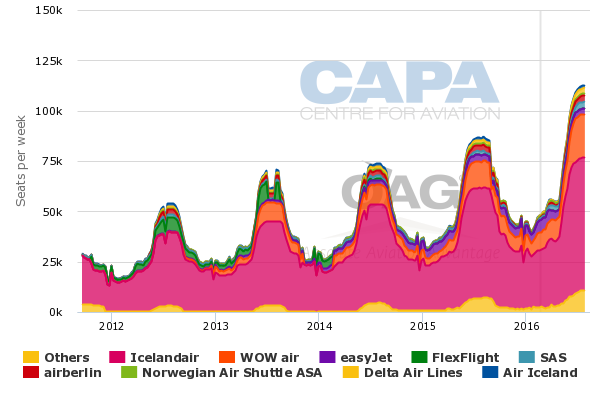 Moreover, the number of connection opportunities offered by Icelandair has increased significantly since WOW air's entry into the market. This is more important than its raw share of seats, given the importance of transfer traffic to its growth.

This compares with WOW's 19 destinations in Europe and six in North America, giving 114 city pairs. No other airline offers trans-Atlantic connections through Iceland and only Icelandair operates widebody aircraft.

Reykjavik continues to be a dynamic market and competitors continue to expand this year. WOW Air plans to launch services from Reykjavik to Frankfurt, Toronto, Nice, San Francisco and Los Angeles in summer 2016.

The Frankfurt route had been a monopoly for Icelandair until Lufthansa launched a three times weekly seasonal summer service in Apr-2015. Icelandair will increase its weekly frequency this summer to 10 times in response to WOW's six times weekly service to be launched in Jun-2016. Toronto is currently an Icelandair monopoly route, pending WOW's May-2016 launch. WOW will operate four weekly flights, compared with Icelandair's planned twice daily service.

Nice, San Francisco and Los Angeles will be WOW air monopolies, according to OAG. As a result, they will have no direct competitive impact on Icelandair. Airbaltic will launch Reykjavik-Riga in May-2016; Icelandair does not operate this route, but this will have the effect of growing the market and potentially adding feed to Icelandair's North American routes. The same applies to Germania's planned launch from Reykjavik to Bremen in Jun-2016 and Wizz Air's new Budapest service in Mar-2016.

See related report: Reykjavik's Keflavik Airport and Icelandair are booming but the future is not so clear

According to data from OAG, Icelandair is to launch services to Chicago and Aberdeen in Mar-2016, where it will be the only operator. In Mar-2016, it will also add Paris Orly to its Paris CDG service (to which airport WOW also operates). Orly-Reykjavik is already operated by Air France-KLM LCC subsidiary Transavia. In addition, Icelandair will launch Montreal in May-2016, in competition with a planned new WOW Air service this summer.

Icelandair can live with LCC competition, but unit revenue will remain under pressure

Icelandair has seen off LCC competition before. WOW Air withdrew from its peak summer-only Zurich service in 2014 after Icelandair doubled its capacity on the route, and Icelandair has been the sole operator since then.

Competitor airlines help to increase customer awareness of the Iceland market and to increase the number of connecting traffic opportunities through Reykjavik. As noted above, WOW Air is the only other operator offering one stop trans-Atlantic services via Reykjavik, but Icelandair has a much wider network on both sides.

Against this background, Icelandair's successful unit cost reduction in 2015, even after taking account of lower fuel prices, was crucial. Cost management will also remain crucial in 2016, when unit revenue pressure is unlikely to relent.