Iberia strikes: the challenge to one of Europe’s least productive workforces

Strikes carried out by Iberia employees in protest against the job cuts proposed under the airline’s Transformation Plan again highlight the divide between labour and management. With cumulative losses of EUR862million from the start of 2009 to Sep-2012, management had to act to restore profitability in the face of intense competitive pressure. We have extended our recent analysis of European airline labour productivity and found that Iberia has one of the least productive workforces.

Strike action could be costing Iberia as much as EUR1 million per day in operating profit impact, underlining the need to find a resolution. Coming on top of previous disputes about the establishment of Iberia Express, the gap between executives and employees may now be too great. If it cannot be closed, Iberia’s parent IAG has Vueling waiting in the wings to take on a bigger role.

Meanwhile, Ryanair, easyJet and Air Europa will be enjoying every minute of watching the strikes deliver more passengers to them.

Background to the dispute

The principal disagreement between Iberia management and unions representing its employees relates to planned job cuts arising from Iberia’s Transformation Plan. The Plan aims to restore profitability and to ensure Iberia’s future after recording a cumulative operating loss of EUR862 million between Jan-2009 and Sep-2012 (including EUR262 million in the first nine months of 2012).

The initial version of the Plan, in Nov-2012, proposed a 4,500 headcount reduction, pay cuts of 25% to 35% and a 15% capacity reduction in 2013. It also sought productivity improvements. Iberia said that it would seek union agreement to the proposals by 31-Jan-2013, but, in the absence of agreement, it would push ahead with bigger capacity cuts. After discussing the Plan with unions, Iberia diluted its originally proposed reductions in headcount and wages by offering staff cuts of 3,147 and pay cuts of 11% for ground staff and 25% for cabin crews. It also revised its planned capacity cut from 15% to 10% in 2013.

Iberia’s labour unions did not agree to the revised restructuring by the management-imposed deadline of 31-Jan-2013, but, instead, called strike action to protest the proposed cuts. As CAPA reported on 06-Feb-2013, Willie Walsh, CEO of Iberia’s parent company IAG, said he aimed to push through the Transformation Plan: “I’ve done it before and I’ll do it again" (Bloomberg, 05-Feb-2013). Mr Walsh reiterated, "We will reform Iberia and we will secure its viability.”

The current dispute resembles the disagreement that led up to the establishment on Iberia Express in Mar-2012. Strikes were called to protest against Iberia management’s launch of a new, lower cost short haul feeder airline to the Madrid long-haul hub. It seems that unions continue to be distrustful of what they see as IAG’s malign influence on Iberia management. International Transport Workers' Federation civil aviation secretary Gabriel Mocho commented (06-Feb-2013), “The fingerprints of Willie Walsh are visible in the breakdown in talks... Orders from above have clearly denied Iberia the freedom to achieve a joint negotiated plan with unions to secure a profitable future for the airline. That insistence on massive cost cutting and job cuts doomed the talks, leaving the unions no recourse except industrial action, a stance that seems to have widespread support at all levels in Spain. Willie Walsh seems to once again be following the same plan. Set the bar impossibly high. Torpedo any agreements that are reached. Create maximum discord. But that plan has been tried before, has been challenged before, and failed before”.

Following the announcement by unions of the planned strike action, Iberia again revised its headcount reduction target, upwards this time to 3,807 (from 3,147). The company also said: “The plans include other measures intended to minimise staff downsizing via pay freezes and reductions, along with new productivity and other flexibility measures” and that the new plan would be negotiated with unions for 30 days from 06-Feb-2013.

Labour productivity is a significant indicator of profitability and Iberia’s restructuring plan, put simply, aims to increase the output achieved by each member of the workforce. CAPA’s analysis of European airlines’ labour productivity (15-Feb-2013) included Iberia’s parent company IAG, but not its component carriers. We now add IAG’s two operating subsidiaries Iberia and BA to this analysis (using 2011 figures), revealing that Iberia management is right to be concerned about making significant improvements to labour productivity.

This applies both in terms of labour cost per unit of capacity and in terms of revenue per employee. BA is among the better performing legacy flag carriers (but still behind the LCCs), while Iberia is among the very worst. In a competitive market, it is not difficult to see which will survive. 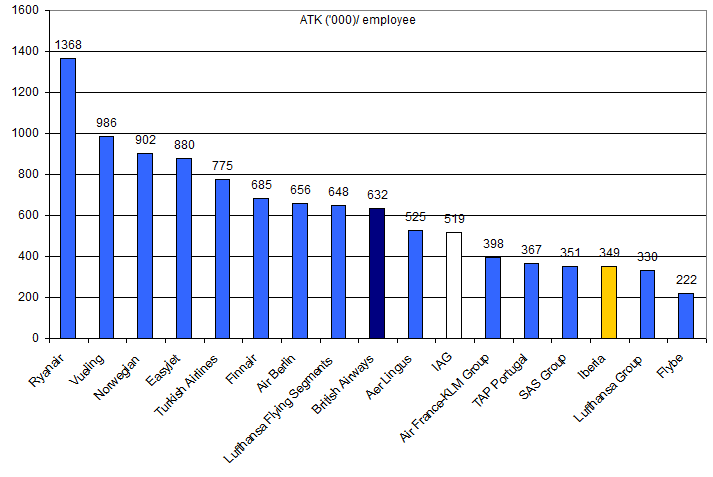 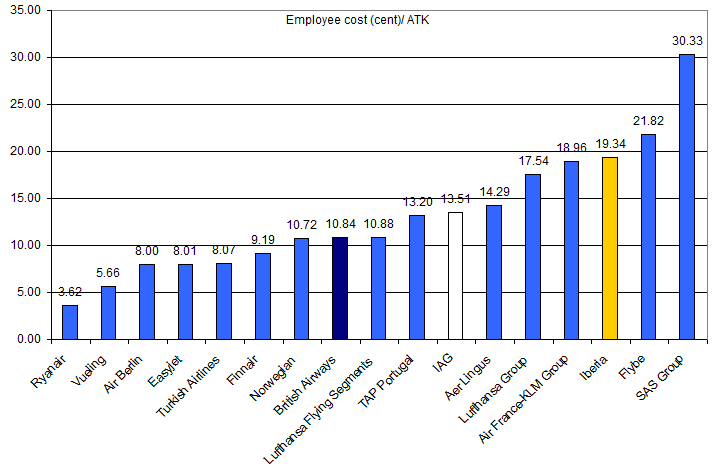 The contrast at home is made much more profound by the chasm between Iberia's and Vueling's revenue productivity. 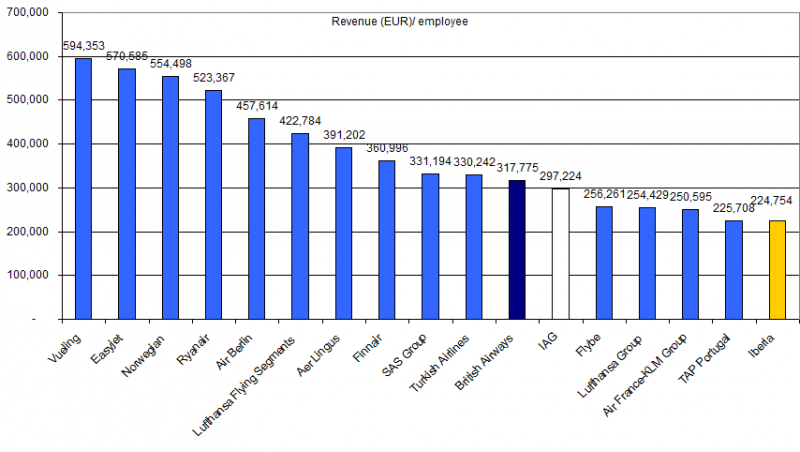 Strike action by Iberia unions projected to scale up

The first period of industrial action commenced 18-Feb-2013 and continues to 22-Feb-2013. Members of the UGT, CCOO, CTA-Vuelo, USO, Sictpla, and Asetma unions also plan 24-hour strikes from 04-Mar-2013 to 08-Mar-2013 and 18-Mar-2013 to 22-Mar-2013. UGT representative Francisco Rodriguez said if no agreement was reached by Easter, the unions may call for additional strikes. Pilot union SEPLA is not joining in the first strike period but it has been reported that it plans to join the second period on 04-Mar-2013.

Spanish law requires the provision of minimum air services levels, set by the Ministry of Development. Under these requirements, 90% of all scheduled long-haul flights will take place during the first strike period, along with 61% of all medium-haul international flights, and 46% of domestic flights.

In addition, Iberia said that it had re-booked 85% of the passengers affected (60,000 out of 70,000) by a cancelled flight in the first strike period, 18-Feb-2013 to 22-Feb-2013, either on its own flights or on those of oneworld partners and 10 other airlines. The remaining 10,000 would all receive refunds. The table below summarises the number of flights cancelled in the first strike period, including those operated by Iberia's regional partner Air Nostrum and its subsidiary Iberia Express and affiliate Vueling.

*Vueling staff are not involved in the dispute, but some of its flights are affected by strikes involving Iberia’s ground handling subsidiary
Source: Iberia website, Vueling website, CAPA news reports

Details of the flights to be cancelled and the minimum service levels for the second and third strike weeks, 4-8-Mar-2013 and 18-22-Mar-2013 are not yet known.

Financial impact on Iberia of strikes could run to EUR15 million

Iberia has not published detailed financial statements since its merger with BA to form IAG. However, it is possible to estimate a rough figure of the financial impact of the strikes using revenue figures from Iberia’s 2010 accounts, the last published when it was still independent, and information provided by Iberia on the proportion of domestic medium haul and long haul flights that are to be cancelled during the strikes.

Making the assumption that all revenue from cancelled flights is lost, either because a full refund is given, or because the revenues are passed to the other airlines on which passengers are re-booked, CAPA analysis suggests that Iberia could lose up to EUR2 million per day in revenues during the strikes. Taking account of offsetting cost savings such as fuel, airport charges and navigation fees, the operating profit impact could be around EUR1 million per day. Thus, three periods of five day strikes could hit Iberia’s operating profit by around EUR15 million.

Given also that Iberia reportedly lost EUR95 million in 2012 on routes it had planned to suspend in the restructuring plan, according to a PwC report (EFE/El Economista, 17-Feb-2013), the importance of resolving the dispute could not be plainer.

Not only is implementation of the plan aimed at restoring profitability, but also opposition to the plan is placing a further burden on the very prospect of restoration.

Coming on top of strikes last year, the series of stoppages this February and March is likely to have negative impact on Iberia’s brand and increase passengers’ propensity to book with other carriers. In the Spanish domestic market, the greatest beneficiary is likely to be Ryanair, already number three by seat capacity, since the number two carrier, Vueling, has also been affected by strikes at Iberia’s ground handling subsidiary. Air Europa should also gain. On markets between Spain and the rest of Europe, again Ryanair looks to be the main potential winner out of the strike periods, followed by easyJet and airberlin.

On long-haul routes, Iberia is operating 90% of its flights during the first strike period, so competitors will perhaps not see much of an impact. Air Europa is the leader by ASKs among Iberia’s competitors that have long-haul operations and is well placed to pick up traffic from those affected by the strikes. South American carriers LAN, Avianca and Aerolineas Argentinas may also gain.

Beyond the first round of strikes, the impact can only increase. Continuing strikes – and merely the threat of them – have an accumulative effect, as passengers and corporate buyers decide to buy away from the airline in order to protect themselves from inconvenience. Thus Iberia's forward bookings will undoubtedly be suffering; with the peak Easter holiday period clearly now being targetted as a negotiating option, irreversible travel decisions are being made. Iberia will only be able to fill the resulting empty seats by discounting, further damaging the bottom line.

Appearances are that each side views this period as pivotal, for their different reasons, suggesting that compromise is not in view at this stage. For Iberia's survival as a viable operation, the figures are there for all to see. In the past, overweight legacy airlines could survive. What is happening now at Iberia is about the future. 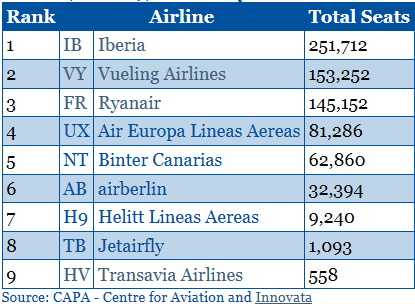 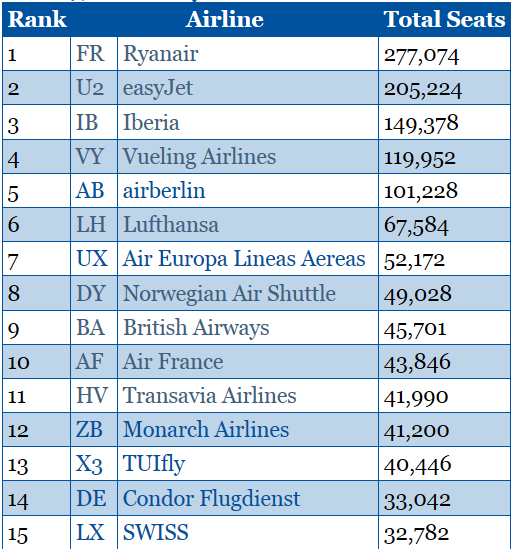 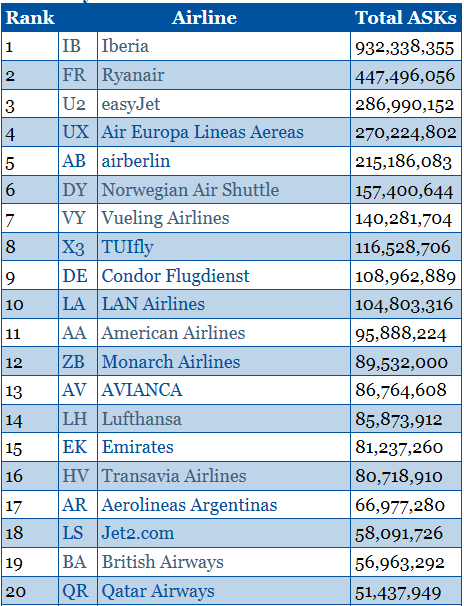