IAG's Capital Markets Day on 4-Nov-2016 was the first since its formation in 2011 when it lowered any of its medium term financial targets. It cut its 2016-2020 average EBITDAR goal, in spite of adding in Aer Lingus for the first time. This followed two cuts to 2016 operating profit guidance during the course of this year, as a result of "a tough operating environment". It has been hit by adverse currency movements, mainly resulting from the UK's Brexit vote, in addition to ATC strikes and terrorist events.

To its credit, IAG has responded to the more challenging trading conditions by lowering its planned capacity growth and capital expenditure during its 2016-2020 strategic plan. These steps are necessary if it is to have a chance of meeting its ambitious goal to sustain a 15% return on invested capital. This target is unchanged, despite the lower profit outlook.

In 3Q2016, IAG's rolling four quarter return on capital fell, after rising more or less continuously since it began to target this measure in 2013. It has consistently been more profitable than either of its two main European legacy airline group rivals (Air France-KLM and Lufthansa). Nevertheless, the downward step highlights the challenge in meeting its own demanding target.

At the beginning of this year, IAG anticipated that its 2016 operating profit before exceptional items would increase by a similar absolute amount as the increased reported in 2015. This implied an increase of EUR945 million, or 40%, to EUR3.3 billion (the 2015 result was EUR2.335 million).

This target was abandoned the day after the UK's Brexit vote, on 24-Jun-2016, as a result of unit revenue weakness resulting from geopolitical risks and uncertainties, including terrorism and the devaluation of GBP (which lowers the translation into EUR of the results of IAG's GBP subsidiaries). At that time, no new target was announced.

IAG replaced The target at the time of its 1H results in late Jul-2016 with a target of "low double digit percentage growth", implying around a figure around EUR2.6 billion.

By the time of its 3Q results in late Oct-2016, a further deterioration in the trading environment led IAG to trim its operating profit target once more to "around EUR2.5 billion". Although this is well below what was expected at the start of 2016, it is still an increase of 7% against the 2015 result.

This led to questions about the sustainability of its medium term profitability and return on capital targets for the period 2016 to 2020.

IAG had raised its targets at its 2015 Capital Markets Day, when it held out the prospect of further increases once detailed planning for new acquisition Aer Lingus had been completed and added to the group's figures.

These questions were answered at IAG's Capital Markets Day on 4-Nov-2016.

In spite of the first time inclusion of Aer Lingus into the group's medium term profit target, IAG cut an important its forecast of an important profit objective.

For the period 2016 to 2020, IAG now expects average annual EBITDAR to be EUR5.3 billion (earnings before interest, tax, depreciation, amortisation and rentals for operating leases).

This compares with the target of EUR5.6 billion set a year ago and before the inclusion of Aer Lingus. That target had been raised from EUR5 billion previously.

The main reason for the lowering of this EBITDAR target is a lower revenue outlook, particularly due to softer unit revenue. As a result of the further weakening of unit revenue, IAG has lowered its capacity growth plans, but sill expects RASK to be below its previous planning assumptions.

IAG expects the negative impact on EBITDAR of lower growth and lower unit revenue to be partly offset the positive impact of cost efficiency gains (particularly related to employee and fuel costs) and the contribution of Aer Lingus. Nevertheless, the net effect of all these factors is to lower its target as noted above. 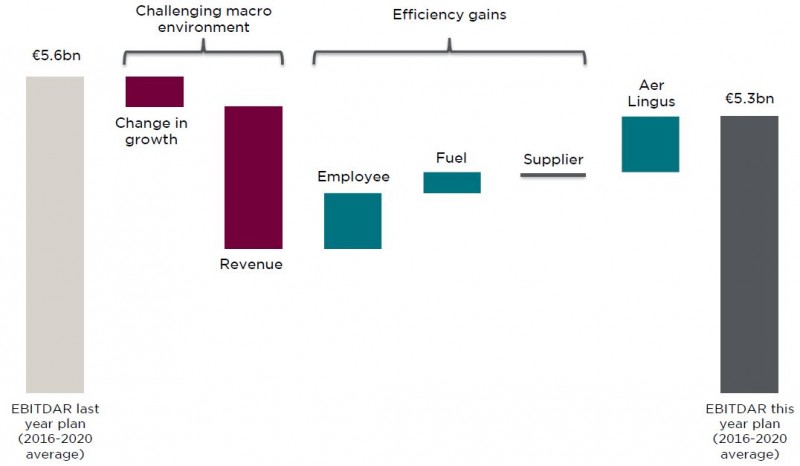 One of IAG's key responses to the weaker trading environment in its markets has been to trim its capacity growth plans for 2016 to 2020. It now has a target average ASK growth of 3% pa, trimmed from its previous plan for between 3% and 4%.

Airline by airline capacity growth plans have not been announced, with the exception of Iberia. Average ASK growth between 2015 and 2020 is now planned to be 4.0% pa, compared with a target of 7.0% pa set in Jul-2015. This is a significant reduction and will result in Iberia's total ASKs in 2020 being 14% lower than projected under its previous growth scenario. 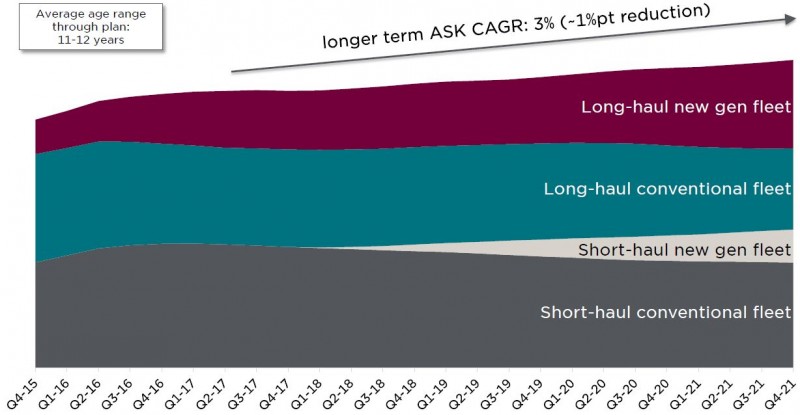 IAG's lower capacity growth target means that it will need fewer aircraft for its 2016-2020 plan. No new orders have been announced since last year's Capital Markets Day, although the group has exercised some options over new aircraft.

IAG has not finalised its plans for the development of its A350 and Boeing 787 fleets to 2020. One of the features of its thinking about its fleet has been to reduce growth in new generation aircraft types, which are typically more expensive than older variants, in order to increase the efficiency of its capital spending. It seems likely that it will reduce its previous 2020 target of a combined total of 63 for these two aircraft types.

Beyond the A350/787 fleet, IAG has set targets for the number of aircraft of all other types. These are detailed in the graphic below.

Since last year, IAG has amended some of the detail for its other long haul aircraft types. It plans to retain four more Boeing 747s, while handing back four more A340s to lessors. There is no change to the planned size of its A380 and Boeing 777 fleets in 2020. It has deferred one A330 delivery through renegotiation, but added one other long haul aircraft to its planned 2020 total.

IAG's short haul fleet is now projected to number 388 at the end of 2020, a reduction of 33 compared with the target of 421 in the plan announced a year ago. This reduction is the result of a lowering of the size of its A320 family fleet in 2020 by 34 aircraft from 396 to 362 and an increase by one in its other short haul aircraft.

IAG: fleet plan to 2020 and changes from last year's plan 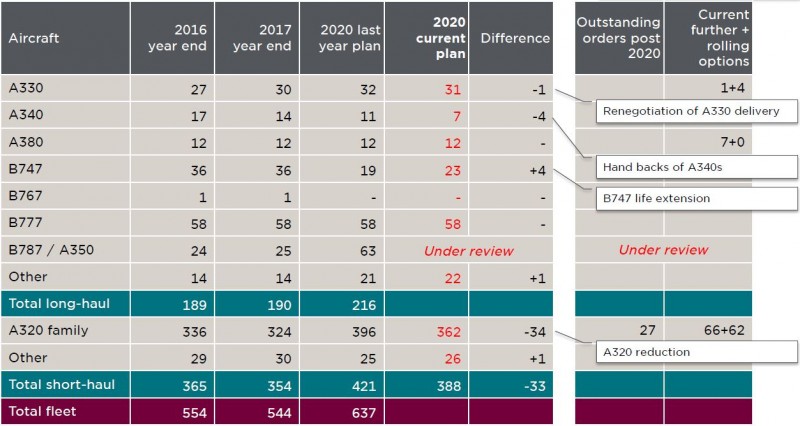 IAG's reduced capacity growth and fleet plans have allowed it to lower its capital expenditure targets for 2016 to 2020. Last year, it planned to spend less than EUR2.5 billion a year on capex, with an average annual figure of EUR1.9 billion.

This annual average has now been reduced to EUR1.7 billion, with a maximum of EUR1.9 billion. Over the five years of the plan, this translates into a total cut in capex of EUR1 billion, or 11%.

In fact, it plans a total capex saving of EUR1.4 billion over the course of the plan on a like for like basis. The EUR1.0 billion reduction is a net figure after adding Aer Lingus investments of EUR0.4 billion in the period 2016-2020. 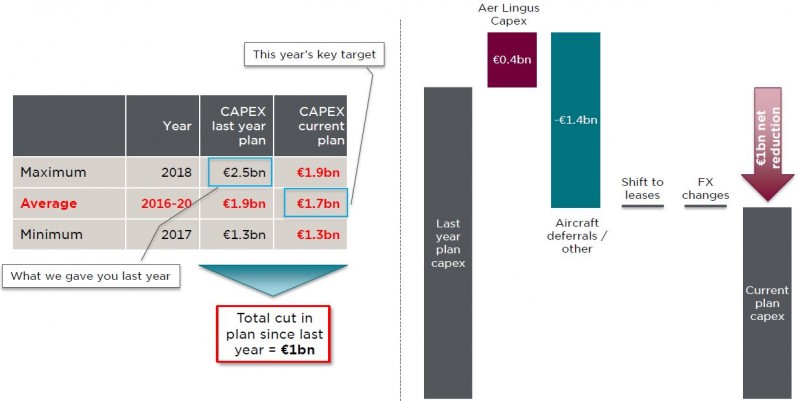 The capex saving in IAG's new plan is disproportionate to the reduction in ASK growth. In other words, it can still achieve a large part of its previous capacity growth with a significant capex reduction.

It believes that it has achieved a 10ppt structural saving in capital expenditure. This has been achieved by a number of initiatives.

The group is also pursuing actions to increase the number ASKs that can be produced from its existing fleet (and new orders). This can be achieved by improving aircraft utilisation across all of its airlines and implementing seat reconfiguration/densification programmes. 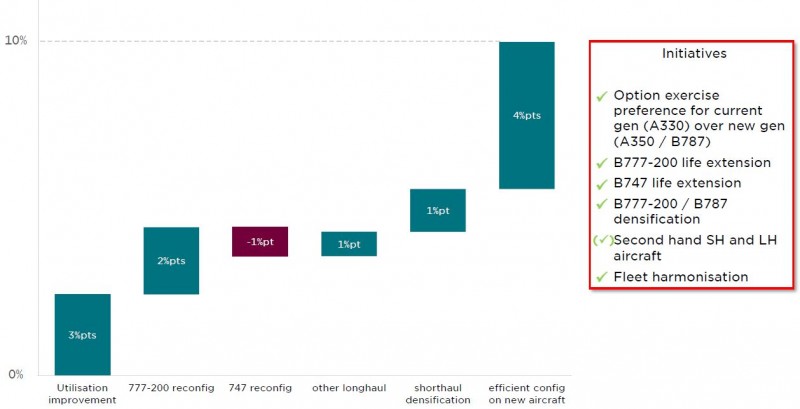 Iberia has seat densification initiatives, including an increase on 12 of its A320s from 171 to 180 seats and the introduction of a new premium economy cabin on its widebody aircraft.

In total, 25 of BA's 777 fleet will move to 10 abreast in economy, implying that 20 from its Heathrow hub will also be converted (although any changes to the premium cabins of these aircraft have not been announced).

In addition, IAG said that there would be a smaller first class cabin in Boeing 787-9 aircraft joining the fleet. According to the CAPA Fleet Database, BA currently has 15 of the variant, with a further three on order (one due in Dec-2016 and two in 2018). 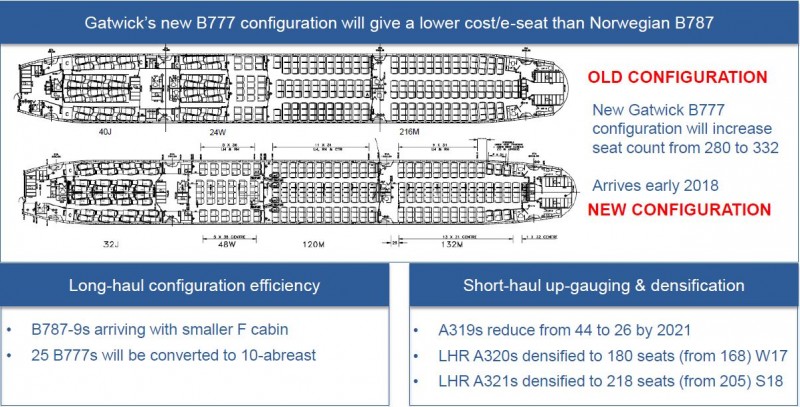 Thanks to its lower capex plans, IAG still expects to generate more than enough cash each year to cover its outflows.

Essentially, its sources of cash are its EBITDAR, together with funds sourced from external financing and refinancing. These sources must be enough to pay for its use of funds, which include capital expenditure, dividend to shareholders and expenses related to pensions, restructuring, leases, interest and tax. The difference between these sources and uses is equity free cash flow.

Under IAG's previous plan, it expected to operate with a clear surplus of capital sources over capital uses. Under the new plan, the reduction in EBITDAR by EUR0.3 billion is slightly more than the EUR0.2 billion reduction in average annual capex. There will also be an increase in pension-related cash payments by BA following the revaluation of its pension deficit, but this increase is likely to be relatively modest by comparison with IAG's total cash outgoings.

In the event of a demand shock or other circumstances leading to significantly lower than planned EBITDAR levels, IAG has cash reserves and credit facilities that could be used to fund its capital needs if necessary.

Conversely, if it continues to generate positive (and growing) equity free cash flow, it will have headroom to make additional cash returns to shareholders, to reinvest funds into the business, and/or to reduce debt levels.

IAG has proposed an interim dividend of EUR0.11 per share for 2016, up 10% from last year's sum. It expects to pay a full year dividend of twice this amount, compared with EUR0.20 paid for 2015 (which was IAG's first year of paying a dividend to shareholders).

At its Capital Markets Day in 2015, IAG had increased its long term financial goals for 2016-2020. Although it has now lowered its EBITDAR target, its crucial operating margin and return on invested capital (ROIC) goals remain unchanged after its latest Capital Markets Day.

IAG still has an operating margin target range of 12% to 15% and an ROIC target of 15%. Even if the absolute profit numbers are lower, it is still possible to maintain previously expected levels of ROIC if the capital base is also commensurately lower. This is what IAG hopes to achieve through its capex savings. 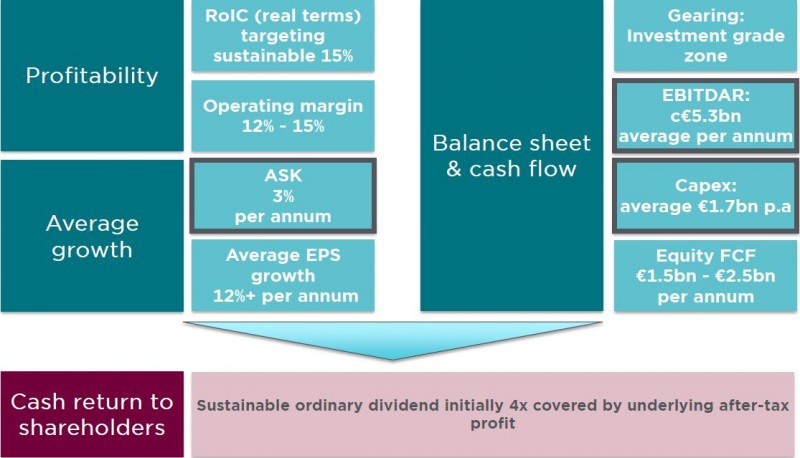 In spite of this optimistic medium term outlook from IAG, it has not yet reached its margin and ROIC targets. In the four quarters to 3Q2016, IAG's margin was 11.2% and its ROIC was 13.0%, according to its 3Q2016 results presentation.

Although below its 15% target for 2016-2020, this ROIC figure was ahead of its weighted average cost of capital, calculated by IAG to be around 10%. This is a highly significant achievement in an industry that has historically consistently failed to cover its cost of capital. 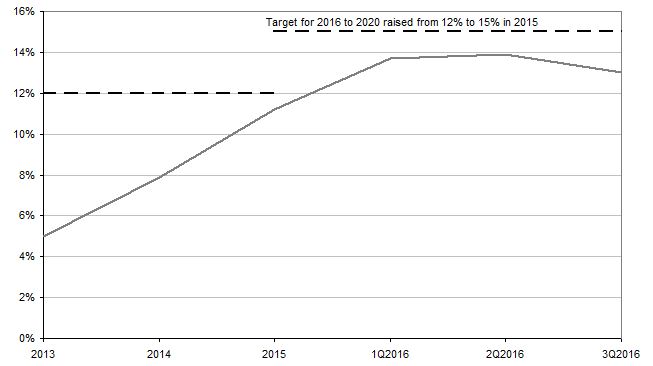 IAG's ROIC target is challenging, particularly if the cycle turns down

One quarter does not necessarily mark the start of a new trend, but it highlights how challenging IAG's 15% ROIC target is, particularly bearing in mind that is a target for sustainable (ie through the cycle) returns. Just to maintain a return through the cycle that remained in excess of its approximately 10% cost of capital would be an impressive achievement.

The airline industry globally is expected to make returns in 2016 that are higher than previous cyclical peaks and so further improvements would be unprecedented.

Against a backdrop of increasing macro uncertainties, there have been a number of signs that European airline sector may have reached a cyclical peak.

If IAG is to achieve and keep achieving its target ROIC, it will either need the industry to continue to rise above these peak levels of returns, or, if the cycle turns down, IAG will have to buck the falling trend of the rest of the industry in a very significant way.