How consolidation has changed the US airline industry; more to come - US Airways' Doug Parker

Judging from press reports, the greatest insight during the US Airways Media Day last week was something US Airways Chair Doug Parker has been saying for years - there is probably one more big merger move left in this round of US airline consolidation. But there were two greater nuggets during the event - the fact that the world remains unconvinced that the US airline industry has really changed and those changes mean the need for more infrastructure may be completely overstated.

Perhaps there is no more eloquent example of the changed environment as Mr Parker’s characterisation of the US industry as mature, with not a lot of growth prospects for the future. That was the real headline of the day. Interestingly, despite the fact the changes are now three years old, industry forecasts remain steadfastly where they were, with the US industry is expected to grow at its usual 5% per annum.

The implications of the new dynamics indicated that, at least for the US, aircraft acquisitions will be more for replacement than growth even as other world markets grow exponentially. The same is true for Europe, according to those attending the Phoenix Aviation Symposium, where there was wide-spread agreement on Mr Parker’s expectations from airframe manufacturers, financiers, government officials and even airports, although all asked not to be identified since they different from their own company’s forecasts.

Underestimated a lot, but never out, we will control our next moves

As Mr Parker swung into his presentation, it was clear the world remains unconvinced that the US airline industry really has changed. It seems almost incredible that many remain unconvinced as oil beats back capacity. Airlines take very little time to make those calls and by their actions they have proven by their deeds that things have changed.

Perhaps the best example of how the industry has changed is US Airways itself, as President Scott Kirby pointed out the number of times the company has been counted out, only to emerge a better, stronger player. Indeed, one statistic illustrated the carrier’s accomplishments. Its stock price rose 107% in 2010 from 2009, more than any other carrier in the industry and, since 2000 its improvement is second only to Continental.

Mr Kirby and his colleagues put their airline into context with the rest of the industry, making that statistic even more impressive. It is smaller, they say, its Philadelphia and Charlotte hubs drive fewer revenues than the big three - United, American and Delta. US Airways has only 10% market share versus its competitors. Even so, while it may be smaller, that does not mean it isn’t a player.

How consolidation has changed the US airline industry

“We don’t have the revenue advantages of the three larger airlines,” said Mr Parker. “So where do we fit in? The reality is we are well aware of our position and know it creates challenges. The challenge for us is to be able to control our destiny and in order to do that we have to continue to do what we did in 2010 again and again. That way, if another consolidation comes, we can decide what we want to do. But you have to remember that stand alone works.”

He noted that in the past few years executives have been focused on proving it works. It has also proved with its move on Delta and its talks with United it can be an effective catalyst for change in the US industry. While they went on to merge with others, US Airways accomplished its goal in bringing more rationalisation to the industry, he said. Mr Parker reiterated the fact that during its last merger with America West, it had no choice if it wanted to survive but said it never wanted to be in that position again.

Positioning the airline to have that choice, to be able to control its destiny, is one of the nuances that often does not come through when talking to investors who more than likely would want the airline to say yes, no matter the deal, for the action it would mean to the street.

“In order to control our destiny we have to maximize the value of our assets and increase revenues,” said Mr Parker. “We have to maintain our strategic cost advantage over our competitors and do more with less. And we have to engage our employees. If you do all those things you can control your destiny. That is our long-term strategy.”

Mr Parker went on to note that compared to its peers it is right in the mix. He noted that the largest seven airlines all have 3-4% margins, the exception of Alaska and Southwest who are well above the pack and American who is well below. His point was this was so despite its size and the disadvantage in revenues and smaller hubs. 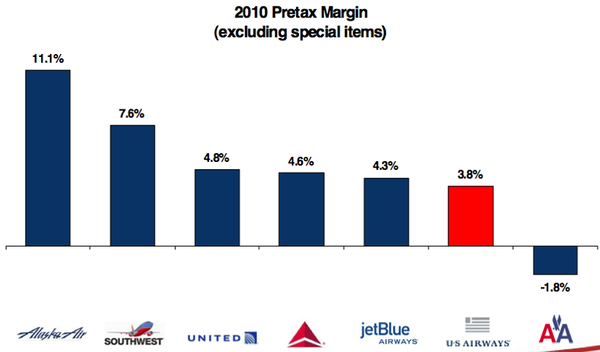 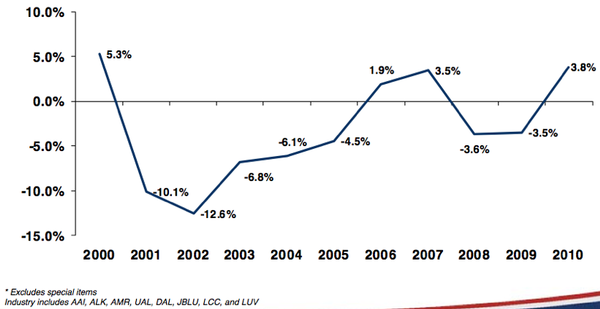 “The reality is we are doing as well as United, Delta and JetBlue so what we are doing works,” said Mr Parker. But, he explained, US Airways has to do it differently by having a 16% cost advantage, especially since it has a 15% PRASM disadvantage to its legacy counterparts.

US Positioning vs. Other Legacy Carriers 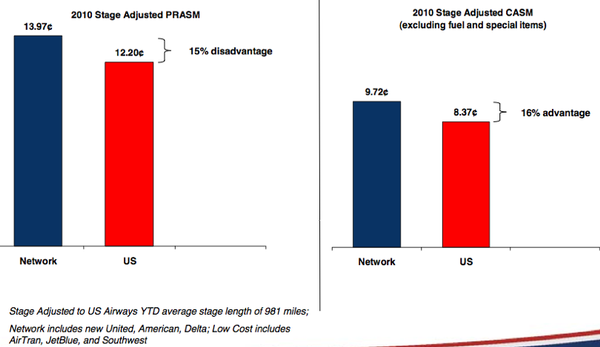 As for its low-cost counterparts, its PRASM comes in a USD12.20 to LCC’s USD9.69. While US Airways beats its legacy counterparts in costs, LCCs still have a 23% cost advantage over the Phoenix-based carrier.

US Positioning vs LLCs 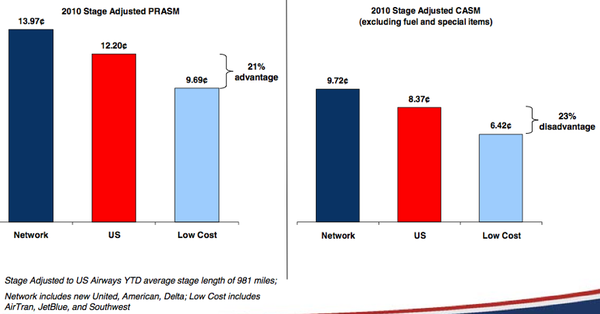 “The point is there is no way for us to close those gaps,” he said. “If they are going to have a revenue advantage then we have to maintain our cost advantage versus our legacy peers. It means we cannot pay the same as United, American and Delta. It doesn’t work and if it doesn’t work it will all go away. That doesn’t mean that there is no room for pay increases, but it does mean we can’t take our cost structure to where they are. We have a different airline model and that model works. We need to prove it is sustainable and once we’ve proven it through sustained stand-alone profitability in excess of our peers we will be in a very enviable position. I think we already are since we can control our destiny.”

President Scott Kirby drove home how many times pundits and the press had lost faith in the carrier and then proceeded to address the myths associated with it.

“I call it beating the odds because everyone has always written us off,” he said. “Yet we manage to surprise everyone. We’ve been dealt a lessor hand of cards but that has forced us to think more creatively.” 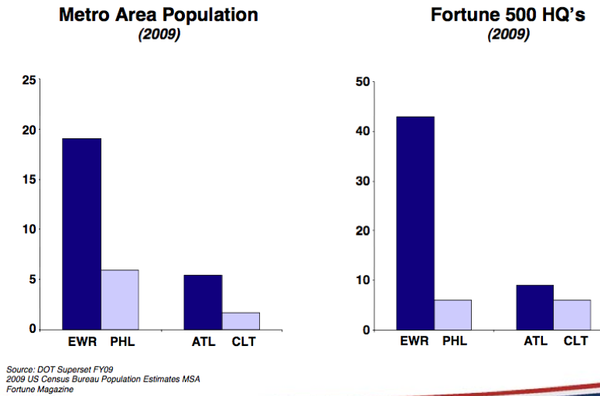 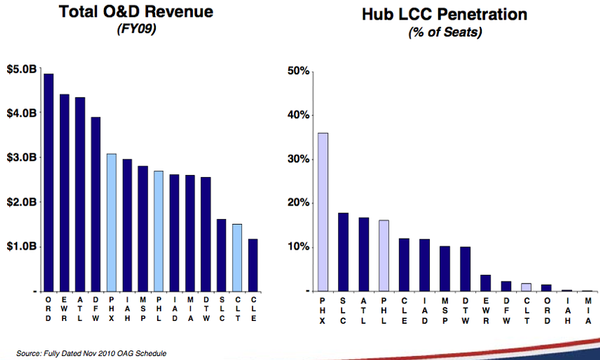 Mr Kirby also pointed out that its Phoenix hub had a high penetration from low-cost carriers as does Philadelphia. “That is also why we have to do things differently and also why we have to have a cost advantage,” he said. “It’s a hard story to tell labor but it is the reality of who we are. But for all that, we are doing really well right in the middle of the pack on connecting RASM. Where we do worse in in local revenue. We have much less of that because these are smaller cities and there is more low-cost competition. If you add all that up you see a USD1 billion shortfall in local revenue. Despite all that, we are an amazing story because US Airways is one of the best performers in the industry over the last decade and we have been able to raise capital in the worst times even with a lessor hand of cards.”

Causing US to generate less RASM 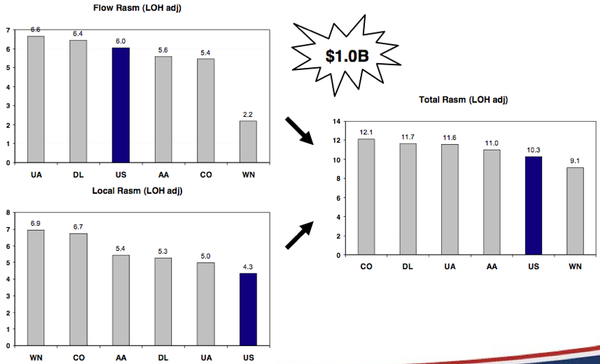 Mr Kirby also noted that the airline has removed the pad from the schedules, unlike its peers, and yet consistently came in at the top of the industry on consumer quality metrics. At the same time, COO Robert Isom noted that taking the pad out of block times, drives down costs. He also noted that its 2011 strategy is to leverage customer service improvements and technology to improve efficiency which then lowers costs further. Part of this was using technology to recover from irregular operations faster both in its own operations and for getting passengers back on track.

A perfect example of that, he said, was the company’s plan to in-source reservations by October without increasing costs. “It's a lot cheaper to do it off shore, but we found ways with automation and our overall operations that allows us to bring that work back.” 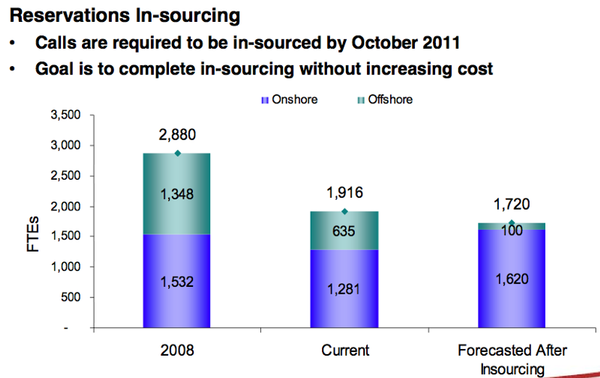 Mr Kirby also questioned the myth that consolidation is so hard as to make it not worthwhile and pointed to the massive benefits of its merger with America West along with Northwest/Delta and United/Continental.

Not surprisingly, he reiterated US Airways’ contention that in today’s fuel environment the best hedging strategy is not to hedge at all. That strategy yielded USD140 million in fuel savings last year and, despite the fact it did not hedge last year, it had the lowest fuel costs in the industry.

CFO Derek Kerr said one of the most important industry initiatives was to take capacity out of the system and US Airways has significantly reduced capacity since 2006 and continued that last year.

Consolidation and ancillary revenues have also wrought big changes and he noted that ancillaries accounted for the majority of the company’s USD447 million in profits last year.

While US Airways was able to raise capital in 2008 and 2009, it feels it must increase liquidity from its own operations in the future. He indicated the company has no big obligations coming due, unlike its legacy peers, who have had to raise capital to address big obligations this year. He also pointed out that the carrier increased revenues by 12% last year despite having no presence in the booming Pacific market. 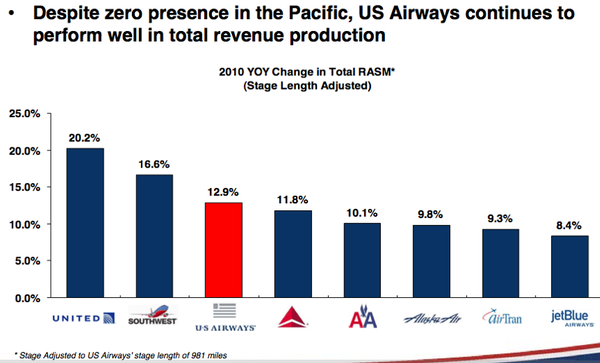 It is still facing headwinds, he said, indicating that the planned fuel expenditure developed in December at USD700 million was now USD1.4 billion every day. 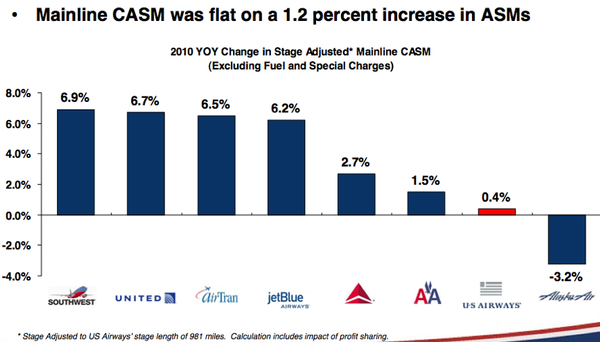 Despite the failure of the latest fare increase, US Airways is seeing no fall off in demand from those fare increases that have stuck. Many have been worried that the end of the first quarter would yield dropping demand.

“From the RASM perspective, we have a strong revenue environment,” CFO Kerr said. “March RASM was up 9% despite the fact Easter has moved into the second quarter. The yield environment continues to stay strong and from a corporate bookings perspective it is still very strong. We did see a dip following from the Japanese crisis but that has come back. All this means the industry will be profitable even at high fuel.”

More than just another earnings call

There were a lot of insights into US Airways' thinking at its recent media day that go well beyond what one hears during earnings and investment conference presentations.

First of all, one cannot get the enthusiasm for the industry, the company and their colleagues as they jokingly jab and poke at one another. Nor can one hear the attacks on conventional wisdom that either confirm one’s suspicions or bring new light to an old topic. That is exactly what happened at the media day when the US Airways executive team blasted myths and questioned the unbridled growth government and airports are expecting.