Of the four, Houston has lost relatively less stature due to its reputation as the US’ oil capital. It is the focus city for most US oil companies and for many foreign oil companies with US operations. Emirates operates twice daily to Dubai and Qatar daily to Doha. One of the two destinations announced by Continental once it receives the B787, is oil-rich Nigeria. It is also the largest hub for Continental (soon to be United). 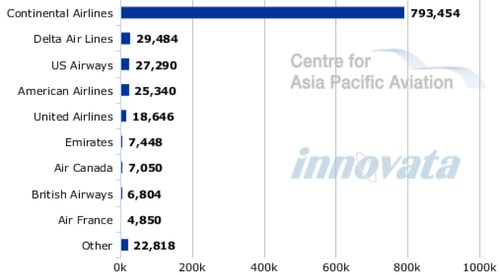 Looking at the carrier shares, there is no doubt as to who owns the traffic at the airport. Continental has an 84% share, which, when combined with current United flights, moves the total beyond 86%.

Not only does every other carrier pale in comparison but the seats generated by “other” airlines is quite small as well. A measure of the dominance held by CO is reflected in the fact that Emirates, with just 14 777 flights per week manages to appear on the a-list.

As has been so frequently observed at other US hubs, the dominant carrier allows for few challengers at its key cities, keeping competitors at bay in a way only seen in the US. 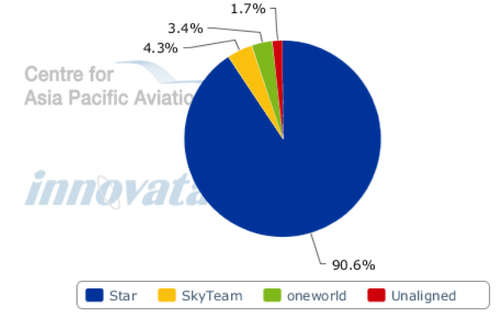 Even more power with Star partners

The corollary is a similar dominance by Star with a more than 90% share. If we look at airports across the growing Southern tier of states, we find American and oneworld in charge at Miami and Dallas, SkyTeam and Delta pulling the strings in Atlanta and now Star top dog at Houston.

Also consistent with the American model, is the preponderance of domestic traffic, though the airport has a higher percentage in international seats than was found at either Atlanta or Dallas. 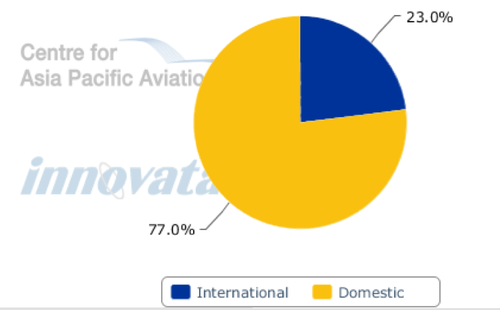 As can be seen from the next chart, much of that capacity is destined for the Caribbean, Central and South America, significantly bolstering the new United’s presence in that heretofore weak geography.

Asia as a weak spot

The area with the least coverage is Asia with a single flight to Tokyo direct from Houston. However, with a single connection, much of United’s Asian network is available over San Francisco, and to a lesser degree, LAX. 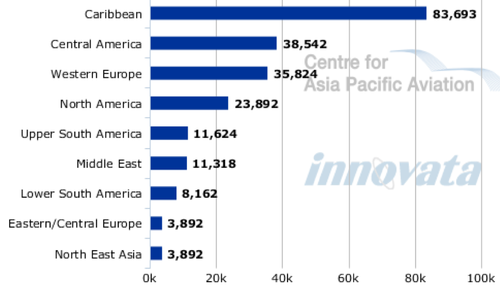 Another similarity shared with many of these fortress hubs is the relative lack of low-cost competition at the airport but not in the metro area. Miami and Dallas have very little low-cost presence at their hub airports but each has a nearby airport that does. In Miami, that is Ft Lauderdale, in Dallas it is Love Field and in Houston it is Houston Hobby Airport, 10 miles south of the city centre and nearer than IAH, which is 23 miles north. 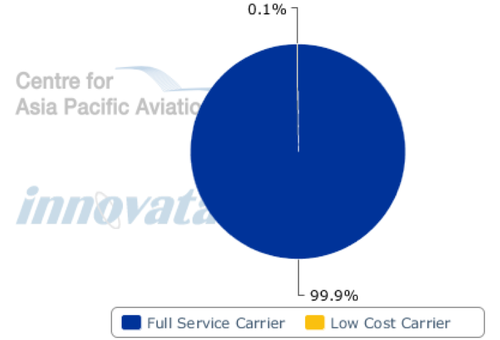 While there is essentially a single carrier operating at IAH, with the consequent ability to charge higher fares, the nearby presence of Southwest at Hobby tempers that trend. However, between Houston and Atlanta (695 miles), a route connecting two legacy carriers at fortress hubs, fares on average exceed the cost of a longer (945 miles) trip to Chicago where Southwest is a player.

Houston’s future is generally bright. It is a relatively new facility, with five runways and adequate space for growth. Upon completion of the merger, it will be United’s largest hub, well positioned to capitalise on the growing markets in the southern hemisphere and, for the foreseeable future, driven by oil.