Any economic ‘green shoots’ are not showing signs of sprouting soon, at least according to Hong Kong International Airport’s (HKIA) recent traffic figures. Airport Authority Hong Kong (AAHK) CEO, Stanley Hui, stated the aviation industry worldwide has “yet to show signs of recovery as the gloomy economic outlook continues to dampen travel demand”. He added, “this uncertainty has been worsened by the recent H1N1 influenza A outbreak”. 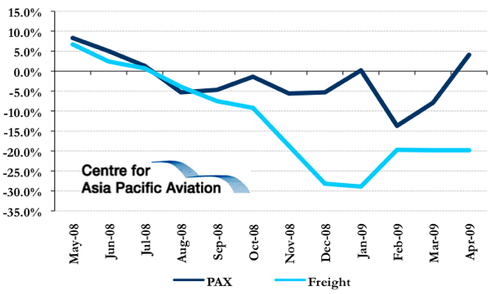 The airport saw a mild increase of 4.1% in passenger traffic in April, to 4.2 million, mainly stimulated by a rise in local residents' travel during the Easter holidays. AAHK reported resident HK traffic surged 40% year-on-year in the month (due to the later Easter this year), while overall visitor traffic fell 9% amid the economic downturn, with markets including the US, Europe and Taiwan “particularly weak”.

The contraction in cargo traffic was “prominent in exports to all major markets”, according to AAHK. Exports shrank 27%, while imports fell 16%, with cargo volumes from Southeast Asia and Japan dropping the most.  Transshipment cargo fell 7% year-on-year, while the corresponding figures for Taiwan and the Mainland saw double-digit declines.