Hong Kong Airlines, the third largest airline in its namesake hub, has filed an application to be listed on the Hong Kong stock exchange. Its application discloses many figures for the first time in the airline’s history, but is not yet a formal prospectus. The application shows Hong Kong Airlines has been profitable, but with significant contributions from sub-leasing of aircraft.

The first part of this report benchmarks Hong Kong Airlines’ yield, cost, labour productivity and aircraft utilisation against Cathay Pacific and Dragonair, its most significant competitors. Cathay has a yield premium over Hong Kong Airlines, while cost figures are impacted by very different average sector lengths.

Hong Kong Airlines does appear to benefit from being a younger airline in having lower labour costs, but will need to gain more cost efficiencies and yield growth. Its strategy will be examined in part two of this report.

Hong Kong Airlines has reported a profit for three consecutive years from 2011 to 2013. However it should be noted that not reporting a profit is not optional as Hong Kong regulatory requirements dictate a company be profitable before listing.

Hong Kong Airlines’ profit shows potential weakness, namely profits appearing to be derived heavily or evenly exclusively from sub-leasing aircraft to other airlines – a practice that is believed not to be uncommon and to have kept a handful of other airlines profitable. Hong Kong Airlines has commented only that leasing comprises a “significant” part of its profit.

It would be more valuable to have access to an operating profit figure that reflected Hong Kong Airlines’ flying business alone (passengers and freight) and not combined with the leasing part of the business. However, it is not possible to simply subtract leasing revenue to derive a more reflective operating profit.

This is because some of the aircraft sub-leased by Hong Kong Airlines are not aircraft it owns but rather aircraft it leases, and as such is also paying a rent for. Subtracting lease revenue would also require subtracting some – but not all – costs.

This difference is important as long-haul operations are more efficient. On long-haul operations, aircraft are typically bigger, have higher utilisation rates and fixed costs can be spread over a longer period of flight. As a rudimentary example, a passenger on Hong Kong Airlines’ two hour Hong Kong-Shanghai flight will be given one meal, but a passenger on Cathay’s 16 hour Hong Kong-New York flight will be given two or three meals – not eight. Efficiency reduces costs and, in turn, allows for lower yields.

Creating a like-for-like sector length-adjusted comparison is difficult given the limited data, but based on information available, Cathay Pacific on a like-for-like basis retains a yield premium. This is not surprising given the group’s wider brand, recognition and premium strategy. 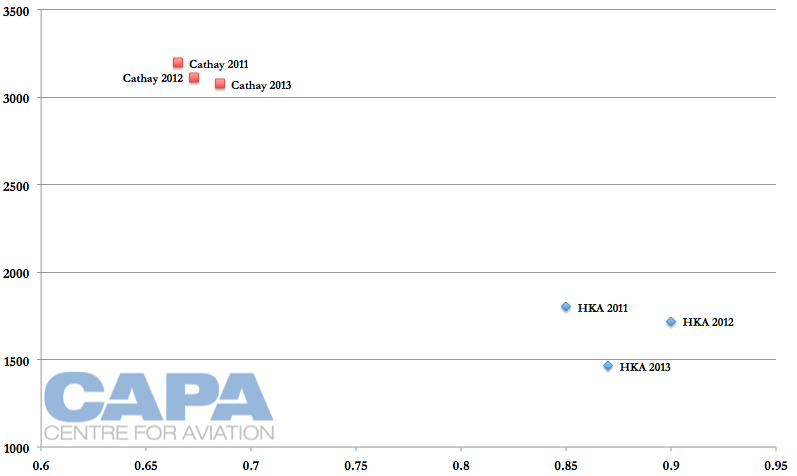 Airlines are not providing enough clarity on costs

Average sector length also impacts operating costs. However, this is difficult to assess. Cathay Pacific only provides a cost per available tonne kilometre while Hong Kong Airlines provides no cost figures. In the absence of data, we calculate the CASK of each airline. Both carriers supply ASK figures, but a CASK comparison has inherent limitations since it does not measure the output of cargo operations, which has costs but does not produce seat kilometres. The CASK figures are once again measured against average (passenger) sector length.

Hong Kong Airlines appears to have made significant cost improvements between 2012 and 2013, based on the limited information available. In comparison, Cathay’s improvements were minor.

A sector-length adjusted comparison would likely show Hong Kong Airlines having a lower operating cost, not surprising given the company’s outsourcing and more basic service offering. However, this does in turn correlate to weaker yields for Hong Kong Airlines. 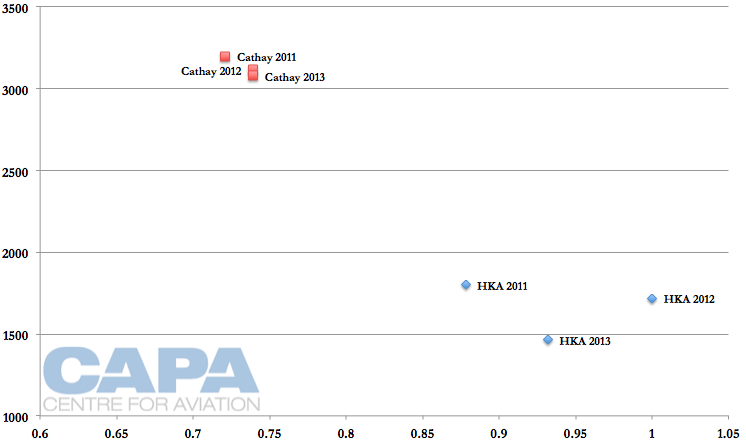 Cost composition structure: fuel and staff costs are lower at HKA than at Cathay

The overall cost composition at the two airlines, as they segregate the data, shows large differences. Fuel comprises 39% of Cathay’s costs but only 30% of Hong Kong Airlines. This can be attributed to Cathay’s longer sector lengths, with fuel costs on ultra-long-haul flights being particularly high (over 60%). As airborne costs go up (due to fuel), ground-based costs often decrease. This is visible with Hong Kong Airlines spending 17% on landing, parking and route expenses compared to 14% at Cathay. This is consistent with the trend of short-haul carriers typically having higher ground costs and low fuel costs than long-haul carriers.

Hong Kong Airlines has a clear labour productivity advantage over Cathay. The average Cathay employee is paid 83% more but only generates 55% more ASKs and 38% more revenue. The figures are once again slightly distorted by measuring only ASKs (which does not include freight) and Cathay only disclosing employee numbers for the group, which includes sizeable ground-based activities like catering and ground handling that produce no ASKs and can be resource-intensive (but generates stable profits). As a result, on this basis Cathay’s productivity is understated. Different sector length as well as type of aircraft used need to be considered as well, generally tilting the balance in the other direction.

Even if it were possible to better account for these figures, Hong Kong Airlines would likely retain a large labour cost advantage. The airline is younger and thus benefits from paying more junior staff whereas Cathay has long-serving senior staff, as well as unions that have been successful at negotiating pay increases. Hong Kong Airlines has a small expatriate workforce, whose costs are high, and has outsourced functions to locations in mainland China, where labour costs are lower. 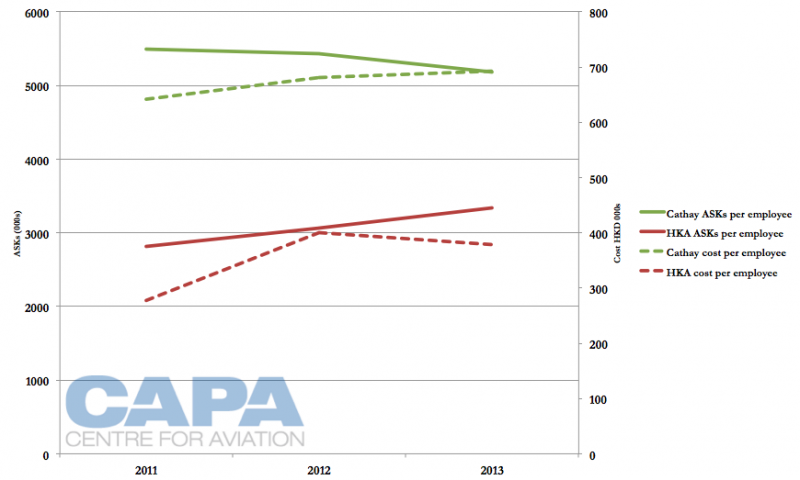 Similar to the trend observed with ASKs, Cathay’s revenue generated per employee has slightly decreased while Hong Kong Airlines’ has increased. 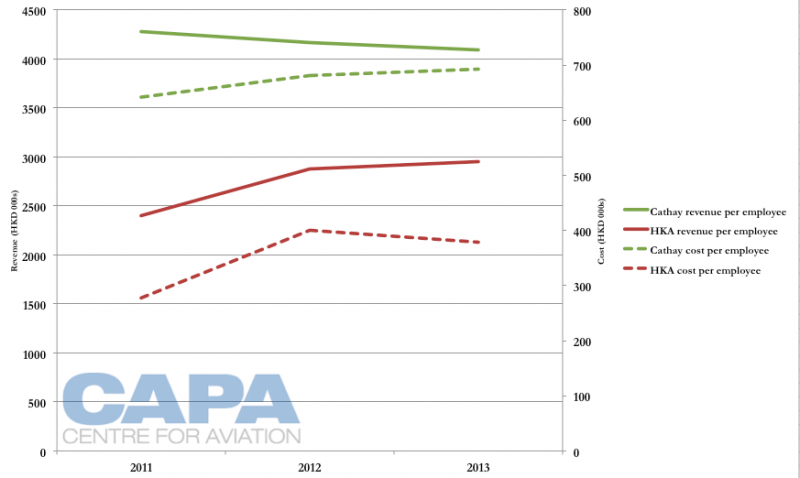 One conclusion to draw is that Hong Kong Airlines has been able to make labour cost efficiencies but Cathay still holds many other efficiencies that come through virtue of size, longer establishment and relationships with suppliers and vendors. Further cost gains at Hong Kong Airlines will be dependent on growth (difficult owing to regulatory restrictions) and a stronger reputation in the industry.

This likely places Hong Kong Airlines’ utilisation in a solid position but without a clear advantage over Cathay. Cathay’s overall utilisation is helped by using a larger portion of its A330 fleet on long-haul flights, which can allow for greater utilisation rates. However, its A330s also serve key mainland Chinese cities where unpredictable air traffic delays prohibit tight scheduling, thus hurting utilisation rates.

Outlook: good, but not model, operating metrics. Room for improvement

Of the operating metrics surveyed here, Hong Kong Airlines is in a good position. It is an achievement to have built the airline so quickly in a competitive hub with entrenched competitors. But the market will be looking to reward not past accomplishments but future opportunities. Hong Kong Airlines’ figures are not consistently ahead of Cathay.

This report does not in any way constitute financial or investment advice. Information and opinions contained herein are subject to change without notice and should not be taken as any solicitation to purchase. CAPA has taken all reasonable steps to ascertain the accuracy of the information, but readers should also conduct their own research.