Dual brand strategies are being put to the test as Hong Kong Airlines relaunches services to Tokyo and Osaka. Its last foray in these markets was before it separated from what became the robust and fast-growing LCC – HK Express. Tokyo and Osaka are HK Express' two largest routes and account for nearly a third of all seats. Ostensibly the two will focus on different market segments, but the core passenger group for each is the leisure traveller.

Hong Kong Airlines is preparing for significant long haul expansion, including codeshares to major Australian cities and its own deployment to North America and Europe. Tokyo and Osaka may indicate what premium traffic and discretionary premium leisure passengers it can win, as well as whether the market sees enough value and sophistication in Hong Kong Airlines or would rather pay more for established Cathay Pacific, or less for HK Express. Hong Kong Airlines and HK Express will jointly account for 24% of both Tokyo and Osaka capacity, compared with Cathay's approximately 43%. The LCC market between Hong Kong and Japan has grown rapidly to where LCCs account for 27% of the total market, including 23% to Tokyo and 35% to Osaka – all from near zero five years ago.

Internally, Hong Kong Airlines had a weak strategy and proposition for the markets. It was only in 2011 that Kansai was served daily, while Narita was daily in 2011 and 2012. Both routes were mostly operated by narrowbody aircraft. Some flights were operated by Hong Kong Express while it was more closely integrated with Hong Kong Airlines and was a full service operation. In 2013 it relaunched HK Express, as an LCC.

Long haul operations to Australia and New Zealand (and later, North America and Europe) will also help diversify the network, even if they draw on mainland China for transfer traffic. 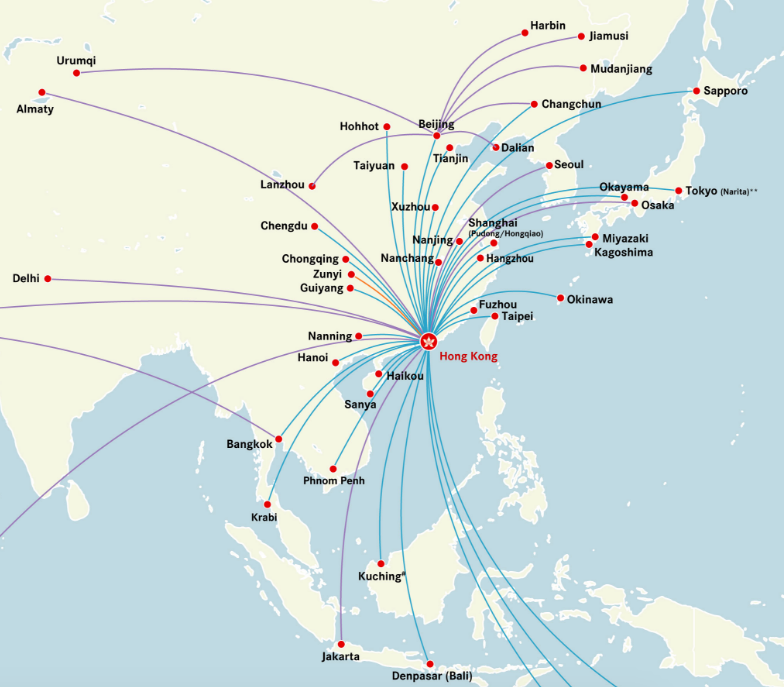 After the expansion to Japan, mainland China will account for 44% and key Southeast Asian markets will remain at approximately 26%. Japan will increase from 11% of the network to approximately 17%.

There have been no significant direct competitive developments in the Hong Kong-Japan market that might have prompted a response from Hong Kong Airlines. Full service capacity has been stable.

Most notably, but still relatively insignificant, is a decrease from JAL as it switches from 777s to 787s. However, JAL's market is more focused on outbound Japan and the connecting market beyond Tokyo whereas Hong Kong Airlines will mostly sell from Hong Kong. Hong Kong Airlines' re-entry is largely prompted by the opportunity of growing inbound tourism to Japan. If anything, the airline's entry could have been sooner. Waiting any longer could have meant encountering more difficulties in securing slots in Japan. Hong Kong Airlines already missed the opportunity to use late night/early morning slots at Tokyo Haneda, which have now been occupied by Cathay Dragon and HK Express.

Hong Kong Airlines' entry will mean that the group grows stronger in Tokyo and Osaka compared with competitors. Defining "group" is difficult: Cathay and Dragonair essentially function as the same and both are full service airlines. Dragonair is wholly owned by Cathay, whereas in the other groups the ownership is partially or wholly owned but at a distance (or under a holding company). The other groups have varying levels of coordination and, in the case of Hong Kong Airlines and HK Express, say that they do not coordinate. In fact, the two can upset each other.

HK Express and Hong Kong Airlines will jointly account for 24% of the Hong Kong-Tokyo (all airports) market in Aug-2016.

HK Express – the LCC – will have greater capacity and frequency share than the full service Hong Kong Airlines. Their 24% share compares with Cathay's 43%. This will make Hong Kong Airlines/HK Express the second largest group in the market – after Cathay and ahead of ANA (20%). ANA's share is nearly double that of the JAL Group (11%). 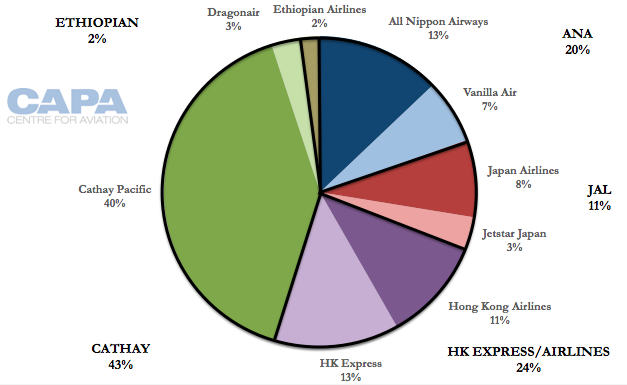 Between Hong Kong and Osaka HK Express and Hong Kong Airlines will retain a 24% market share, and Cathay has a similar 42% share. The main difference is that the JAL Group's presence is significantly smaller, since JAL does not serve the route (Jetstar Japan does). ANA Group is larger. 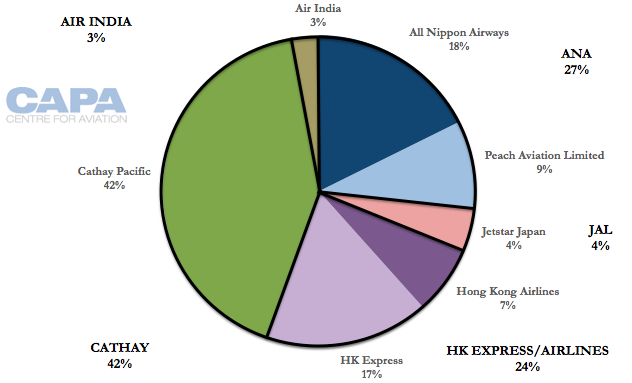 Tokyo and Osaka are the first major examples of overlap between Hong Kong Airlines and HK Express. They briefly overlapped in Bangkok and both serve Kagoshima, although Hong Kong Airlines' flight to Kagoshima is largely sold through travel agencies.

Neither destination has been a significant market for both – where they are competing for independent leisure passengers. Hong Kong Airlines will have a premium product to sell to the discretionary leisure passenger and Hong Kong Airlines is exploring connections, both online (from Australia) and offline (via interline from North American airlines). Ultimately, the largest passenger segment for each airline is the same.

For other airline groups the markets are different.

ANA and JAL are stronger in the local Japanese market and offer connections to North America, while Cathay has a grip on Hong Kong and also offers connections to its network – both short haul (within Asia) and medium/long haul (Australia, Middle East and Europe).

Tokyo and Osaka will demonstrate the value that passengers place on a full service versus a low cost airline. More specifically, the route will indicate whether Hong Kong Airlines is sophisticated enough for the discerning Hong Kong market, or passengers would prefer to pay more for Cathay or less for HK Express. Some airlines refute a discussion on "low cost" and "full service", so this will be an indication of how the market perceives their value and service proposition, whatever it is called.

Japan is the largest market for HK Express

Hong Kong Airlines' re-entry to Japan is not a light matter for HK Express. In Aug-2016 Japan accounts for 49% of HK Express' seat capacity and 62% of its ASKs. Its second largest market, Korea, is much smaller at 17%. 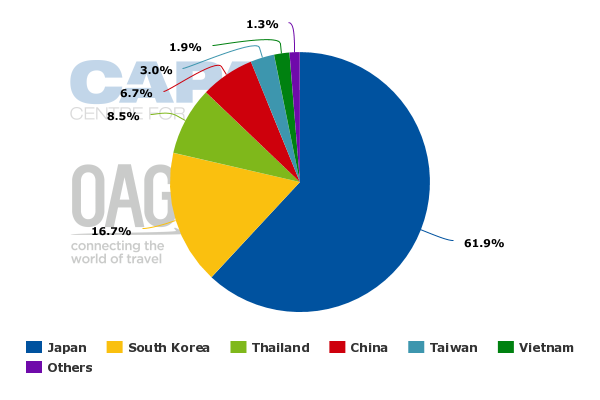 In Aug-2016 Osaka Kansai is HK Express' largest route (14% of system seats), while Tokyo is its largest destination (Haneda and Narita combined account for 17% of seats). Osaka and Tokyo flights account for approximately 31% of seat capacity.

An additional six weekly flights to Tokyo Narita that commence in Oct-2016 will mean that Osaka and Tokyo grow to account for 36% of system capacity. HK Express will have five daily flights to Tokyo, comprising three to Narita and two to Haneda. Tokyo's increase occurs as Osaka Kansai is decreased by two weekly flights, but the net change is still positive. There are some changes elsewhere (decrease to Seoul Incheon) and an overall smaller schedule from Oct-2016 indicates that there are new routes and increases still to be announced. 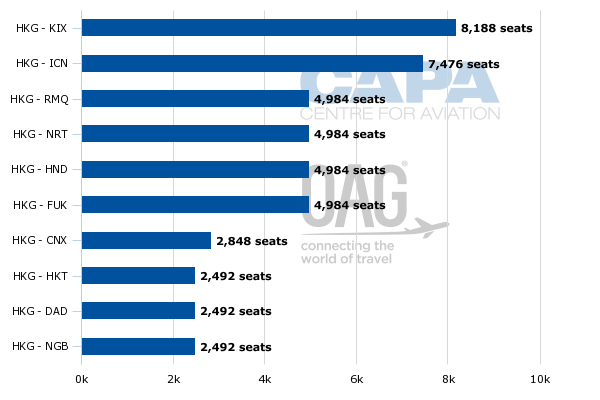 In under five years the LCCs between Hong Kong and Japan (the 12th largest international market in Asia) have gone from being nearly non-existent to accounting for 27% of the market. The largest jumps in LCC share were between 2013 and 2015. In 2016 so far LCCs have gained only 3ppt, a result of limited Haneda night services and slots in Hong Kong and Japan. Vanilla Air and HK Express have spoken of wanting to add more services, if permitted. 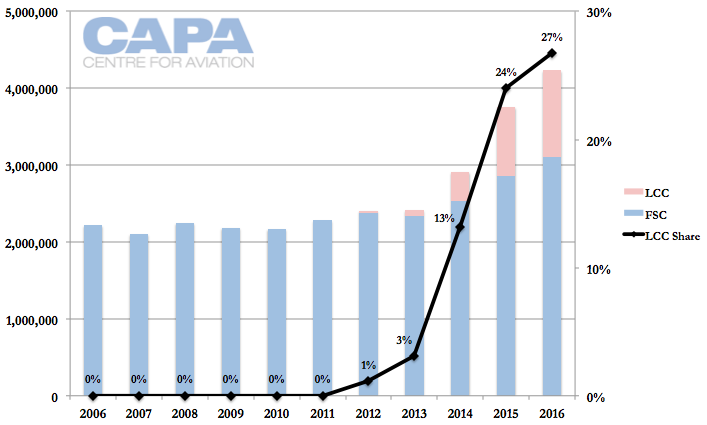 The two biggest markets by far between Hong Kong and Japan are to Tokyo and Osaka, where LCCs account for 23% and 35% of the market respectively. This is comparable with the Taiwan-Japan market, where LCCs account for approximately 30% of seat capacity on the two largest routes: Taipei Taoyuan to Osaka Kansai and Tokyo Narita (the Taipei-Tokyo city-pair is 25% and comparable with the 23% on the chart below for Hong Kong-Tokyo). Smaller Japanese routes have a higher LCC share, or are only served by LCCs. 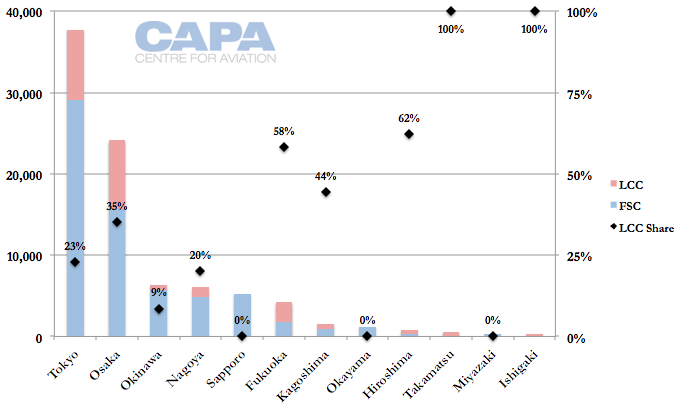 The visitor market between Hong Kong and Japan has grown rapidly in recent years, in line with Japan's inbound growth following the depreciation of the Japanese yen and efforts to attract more visitors. Hong Kong visitors to Japan and Japanese visitors to Hong Kong exceeded 1.5 million in 2005. The 2.0 million mark was not crossed until 2014, but the 2.5 million mark was crossed just one year later, in 2015. 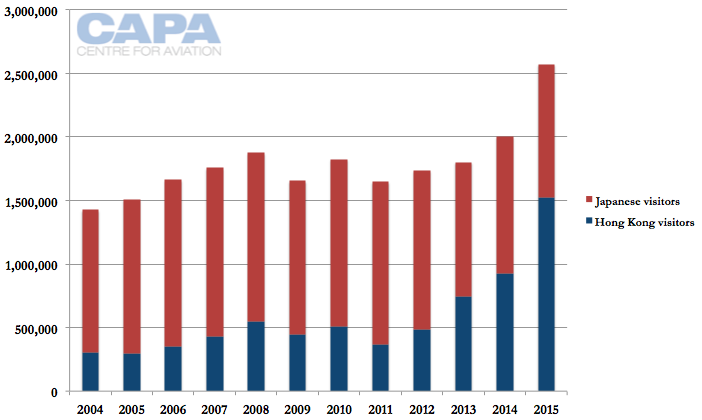 As a regional market for Japan, Hong Kong will be an important source market to continue to drive Japanese tourism, especially to regional areas. Diversifying away from increasingly congested Tokyo and Osaka (in terms of airports and local tourism infrastructure) is important for Japan. Early examples are the growing flights to secondary and tertiary Japanese markets, such as those to be launched in summer 2016 by HK Express. 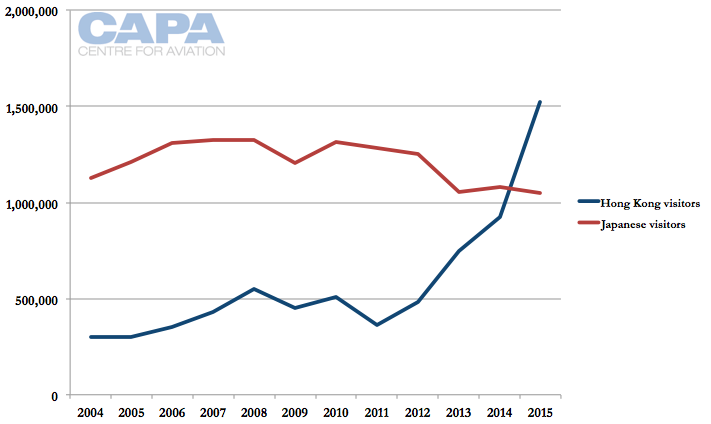 Tokyo and Osaka create an uneasy overlap, with probably more to come

The Hong Kong Airlines/HK Express developments in Japan run counter to many dual brand experiences. It is the LCC, not the FSC, that is established in the market and will be the larger entity. HK Express also arguably has a higher profile than Hong Kong Airlines.

The honeymoon is over. Competitors will be closely watching whether the combined Hong Kong Airlines/HK Express presence makes the sum greater than the parts, or possibly worse, as they compete with each other rather than third parties.