Few low cost airlines have had route pickings as lucrative as those of HK Express. Although its hub airport of Hong Kong has significant slot restrictions and an underwhelming business reception to LCCs, there was significant pent-up demand. This was especially the case to markets in Northeast Asia, where LCC penetration remains lower than in Southeast Asia. HK Express' relaunch as an LCC in Oct-2013 fortuitously coincided with the depreciating Japanese yen and Korean won, further boosting outbound Hong Kong travel. In Feb-2016, 43% of HK Express' seats are to just three cities: Osaka, Seoul and Tokyo.

In Feb-2016 HK Express will operate 13 A320s but plans rapid growth to 50 by the end of 2018, effectively requiring the airline to take one aircraft every month for the next three years. HK Express plans to open four to six new markets in 2016, and at the end of the year will receive its first A320neo and A321ceo. Existing markets could expect additional capacity (frequency increase or replacing A320s with A321s). But as HK Express saturates core opportunities in existing markets, it will need to grow in the more classical LCC sense of stimulating demand in destinations largely new to Hong Kong. Already it plans to open new destinations around Southeast Asia (Laos, Myanmar) and the Pacific Islands (Guam, Saipan). Sister full service airline Hong Kong Airlines also plans to serve Saipan, highlighting the growing challenge of overlap between the two airlines, which do not have a defined dual brand strategy.

In Dec-2015 HK Express disclosed its intent to operate 50 aircraft by the end of 2018, up from 13 in Feb-2016. The announcement of 50 aircraft reflects additional growth in the short term but also a more complete growth plan for 2017/2018, which HK Express had only partial plans for. Although Hong Kong is slot-constrained, it is expected that additional slots will be made available. HK Express, Hong Kong Airlines and Cathay Pacific/Dragonair are all confident that their significant aircraft deliveries in coming years will be accommodated.

HK Express' fleet consists of A320ceos, and in 2016 the fleet is due to transition to a single engine type on the A320ceo, and then expand with A320neos and A321ceos. As CAPA last detailed of HK Express' growth plan:

At CAPA's Nov-2015 Asia Aviation Summit, Mr Cowen detailed the big strides the carrier has made in its fleet plan. HK Express operates 13 A320ceos with an average age of 4.6 years, according to CAPA's Fleet Database. In early 2015, HK Express expected to operate 15-20 aircraft in 2016, including 5-10 A321ceos. HK Express planned to return some of its A320s that were part of the launch fleet from Hong Kong Airlines and have different engines.

The A321 strategy, as CAPA previously noted, is driven by a few components: slots shortages in Hong Kong and elsewhere (Phuket) andtraffic right restrictions (Tokyo Haneda) mean growth needs to occur through up-gauging rather than frequency growth. In some markets without such restrictions but perhaps limited demand, up-gauging could be more a conservative strategy than adding an additional frequency.

See related report: HK Express begins year 3 as LCC; a greater threat to Cathay than Jetstar Hong Kong would have been

LCCs account for 10% of seats at Hong Kong airport

Low cost airlines account for 10% of seats offered to/from Hong Kong in early Feb-2016, according to CAPA and OAG data. While this is a slight increase from recent years, it is still well below the multiples that have been a feature at Southeast Asian airports, reflecting a few reasons: Hong Kong and Northeast Asia's later adoption of the LCC trend, Hong Kong's limited support for LCC operations, protectionism that resulted in Jetstar Hong Kong being repeatedly delayed and then rejected, and finally local carrier Cathay Pacific not having a low cost subsidiary.

Of seats at Hong Kong, 78% are to Northeast and Southeast Asia. The balance are largely to long haul markets where LCCs are not nearly as present globally (and are not at all present in Hong Kong). Further, 36% of all seats at Hong Kong are to/from mainland China and Taiwan. Mainland China is still starting an LCC boom, and airlines there are largely focused on the domestic market. International/regional expansion has favoured other markets that are more popular with Chinese visitors and have resulted in local authorities giving greater access to LCCs than Hong Kong offered. Spring Airlines, for example, reduced its Hong Kong operation and is now rapidly growing in Osaka Kansai. Taiwan has two LCCs – Tigerair Taiwan and V Air – and they are expected to be interested in the Hong Kong market, but there are no bilateral allocations for them. 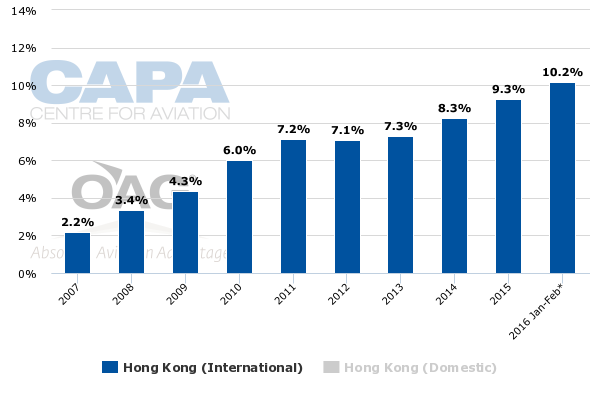 Another qualification is that the 10% of capacity figure for LCCs is for Hong Kong on average. Certain markets experience significantly higher penetration rates. Hong Kong-Tokyo saw LCCs make up 20% of seat capacity in Mar-2015, up from zero a mere 18 months prior. Hong Kong-Seoul grew to 21%.

LCC growth at Hong Kong has largely occurred due to HK Express, directly (its own growth) and indirectly (competitors responding to HK Express' growth). HK Express accounts for 36% of LCC seat capacity at Hong Kong. This is a lower share than what might be expected for a home LCC airline. HK Express' share should significantly increase as its growth over the next few years far outpaces that of foreign LCCs. 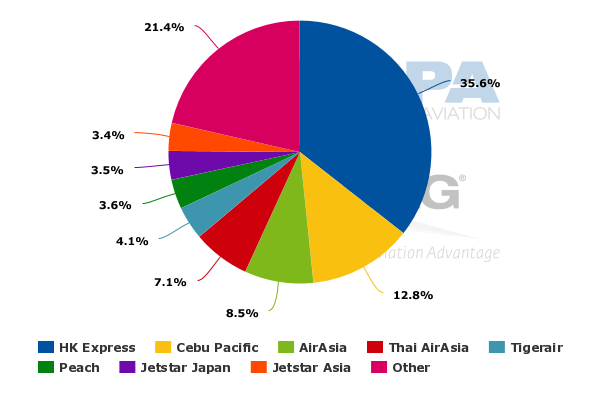 HK Express to open four to six new destinations in 2016. Thinner markets will need to be a focus

At the Jan-2016 announcement of the U-FLY Alliance, HK Express said that it planned to open four to six new destinations in 2016. In mid/late 2015 HK Express announced five destinations for 2015, including two in Myanmar (Mandalay and Yangon), one in Laos (Vientiane) and two in the Pacific Islands (Guam and Saipan).

Below is a table of the 30 largest cities within 2,200 miles of Hong Kong. This distance is not an exact measurement of HK Express' potential opportunity, but is broadly close. Hong Kong-Sapporo, for example, is under 2,200 miles but HK Express cannot operate it due to strong westbound winds. (Full service sister Hong Kong Airlines does operate to Sapporo.) Guam and Saipan are approximately the same distance from Hong Kong as Sapporo, but HK Express believes it can operate to those two island destinations without the operational constraints that Sapporo faces.

Of the 30 destinations, HK Express and Hong Kong Airlines serve all but seven. Some destinations (such as Manila) may not have slots available for either airline, or may have too much competition to make the market attractive (such as Singapore). There could be opportunities within these seven destinations for growth but both airlines will need to reach deeper. For HK Express this means the classical LCC growth by developing new markets. These will be thinner and require more resources to grow. In comparison, HK Express points like Osaka, Seoul and Tokyo – which account for 43% of HK Express' seats – largely sell themselves.

In mid/late-2015 HK Express announced its intention to open service to two points in Myanmar – Mandalay and Yangon – in early 2016. Dragonair and Myanmar National Airlines serve Yangon-Hong Kong but do not serve Mandalay-Hong Kong. Yangon is the primary international gateway to Myanmar, and nearly a dozen airlines launched service to Yangon during the reform a few years ago. Mandalay however is smaller, with international airlines comprising only Bangkok Airways, Thai AirAsia, China Eastern and Silk Air. Myanmar National Airlines has a very limited international presence at Mandalay.

Myanmar service has now been postponed to late 2016. HK Express disclosed the cause as regulatory delays, which pushed HK Express out of the ideal window to launch service. Myanmar's tourism market is highly seasonal, with a distinct spike over northern winter when it is cooler. As regulatory delays saw HK Express anticipating an off-peak launch, HK Express logically decided to wait until the start of the next peak.

HK Express did not specify its regulatory problem. However, its approval process coincided with Myanmar's national Nov-2015 election and subsequent change of government. This could have impacted procedural times. The delay gave a head start to Myanmar National Airlines, which entered the Yangon-Hong Kong market in Dec-2015 with three weekly flights.

As testament to the opaque Hong Kong operating environment that HK Express feels that it combats, Myanmar National Airlines was able to secure lucrative daytime slots and a hardstand gate at Hong Kong. Most other new narrowbody flights at Hong Kong have had to use remote stands. 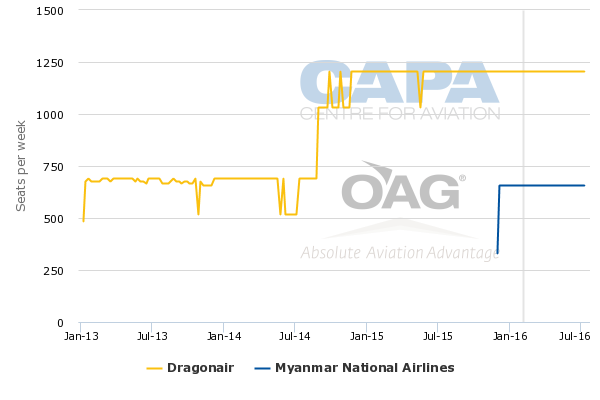 Although the competitive situation with Myanmar national is not ideal, HK Express is not overtly concerned about its competitor. HK Express considers itself as having a local advantage, with an established brand. HK Express will also be able to offer Hong Kong's market the opportunity to fly into one city and out of another, rather than backtrack. Further, HK Express expects to carry some transfer traffic between Myanmar and other Northeast Asia markets (mainly Japan and Korea). HK Express' connecting traffic share is in the single digits, largely a reflection of it having a network heavily tilted towards Northeast Asia (accounting for 82% of available seats), reducing Northeast Asia-Southeast Asia connecting opportunities. Connections are an area HK Express is planning to grow without sacrificing scheduling and utilisation. There could be some reinforcement of connections as part of HK Express' U-FLY alliance, but it is very early days for the alliance. 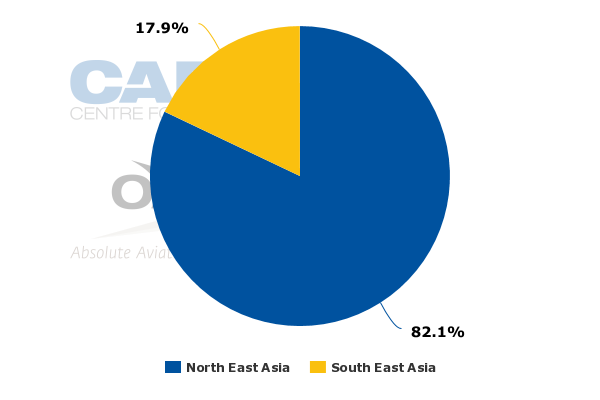 HK Express also announced its intention to open service to Luang Prabang in Laos. As with Myanmar, a launch and fares have not been filed, but unlike with Myanmar there has been no disclosure of any delay. HK Express' service will have the first service of any airline between Hong Kong and Laos.

Vientiane does not offer the same range and size of options as Bangkok, a popular quick getaway for the Hong Kong market (and likewise in reverse for Bangkok residents visiting Hong Kong). Vientiane, however, is still underserved and could become a popular market - it is closer to Hong Kong than Bangkok; it is lower cost than Bangkok; it has a greater range of nature-oriented activities and is new to the Hong Kong market. Previously connections from Hong Kong to Laos were highly circuitous. HK Express, however, will need to build awareness of Laos. 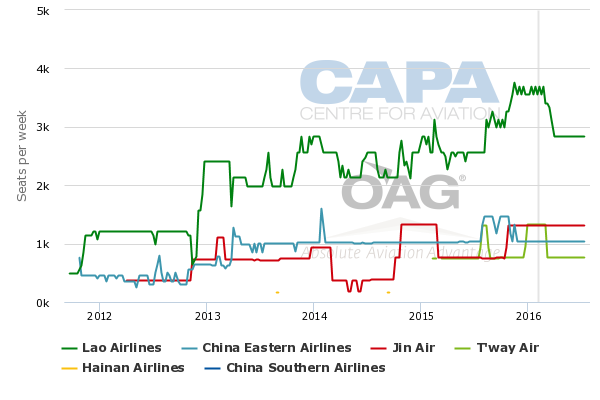 Pacific Island growth for HK Express to Guam and Saipan

There is no service between Saipan and Hong Kong, but between Guam and Hong Kong United Airlines offers four weekly flights as part of its micronesia network. United's flights are often expensive and do not need to be promoted; there is opportunity for HK Express to stimulate the market, but again with a need to build awareness. 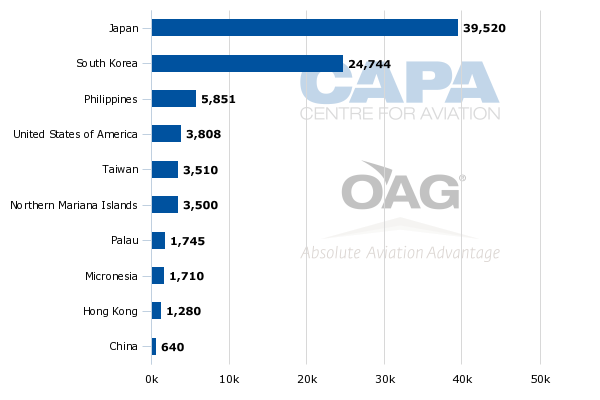 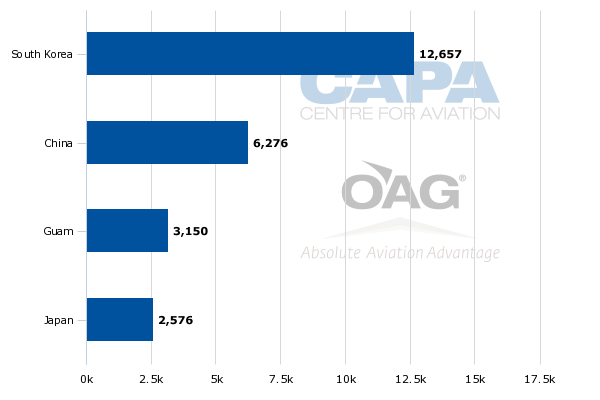 Hong Kong Airlines' application for Saipan includes the Saipan service and also requests approval for general US service, i.e. all points. The application says: "Hong Kong Airlines seeks authority to engage in scheduled foreign air transportation of persons, property and mail from Hong Kong, via intermediate points, to points in the United States and beyond, to the full extent permitted by the U.S. - Hong Kong Air Services Agreement".

HK Express' growth to Southeast Asia and Pacific Island markets could also be a beneficial connecting opportunity for Hong Kong Airlines' core mainland China source market. Northeast Asia – mainly in the form of flights to Japan and Korea – was an easy and profitable win for HK Express. It has been overexposed on Northeast Asia, which showed some impact during the brief MERS upset in Jun/Jul-2015. Although it is welcome for HK Express to diversify its network away from Northeast Asia, growth will not be as easy as it has been – relatively speaking (slots and other challenges have been significant hurdles). Implementing a dual brand strategy could be even more challenging, but necessary.

There is major competition for HK Express and Hong Kong Airlines to deal with. They do not need to fight against each other.