Hiroshima Airport privatisation delayed, but only by 3 months

While airport privatisation procedures and deals have been suspended around the world, the timescale is only slightly amended in Japan, where the next one, that of Hiroshima Airport, has only been put back by a matter of months.

Japan's Ministry of Land, Infrastructure, Transport and Tourism (MLIT) plans to delay the schedule for privatising Hiroshima International Airport by three months, due to the impact of coronavirus on air travel.

The airport is now scheduled to begin private operation in Jul-2021, rather than Apr-2021.

Japan is a country where the notion of privatising airports had not advanced as far as it had in some economically comparable countries. Government deficit was a major reason, but the need to boost tourism and the growth of LCCs were main driving forces for a change of mind in that respect. The concept of privatisation as a “good thing” is now broadly agreed upon by political parties and there is common ground and a common purpose: to increase tourism.

Japan’s airport privatisation got off to a slow start, and the authorities are adamant it will now stick to its timescale, come what may.

Japan's Ministry of Land, Infrastructure, Transport and Tourism (MLIT) plans to delay the schedule for privatising Hiroshima International Airport by three months, due to the impact of coronavirus on air travel.

MLIT intends to select a priority negotiation rights holder for a contract to operate the airport privately (the usual procedure) in Sep-2020, rather than Jun-2020, and the airport is now scheduled to begin private operation in Jul-2021, rather than Apr-2021.

On the face of it, a three-month delay does not add up to much in the circumstances, and it is a positive expression of support for a privatisation schedule for which the MLIT, at times, has had to try to attract the support of foreign organisations – as best it could,  after previously eschewing them for decades.

As is happening everywhere else, Hiroshima Airport has been impacted by events and underwent a steep decline in capacity from the beginning of Mar-2020 through to mid-Apr-2020, whereafter there has been an about-turn to a figure of 47,800 seats in week commencing 04-May-2020. This was from a previous year high of 76,460 back at the beginning of Feb-2020.

But future projections, as with most other airports, are difficult to gauge. 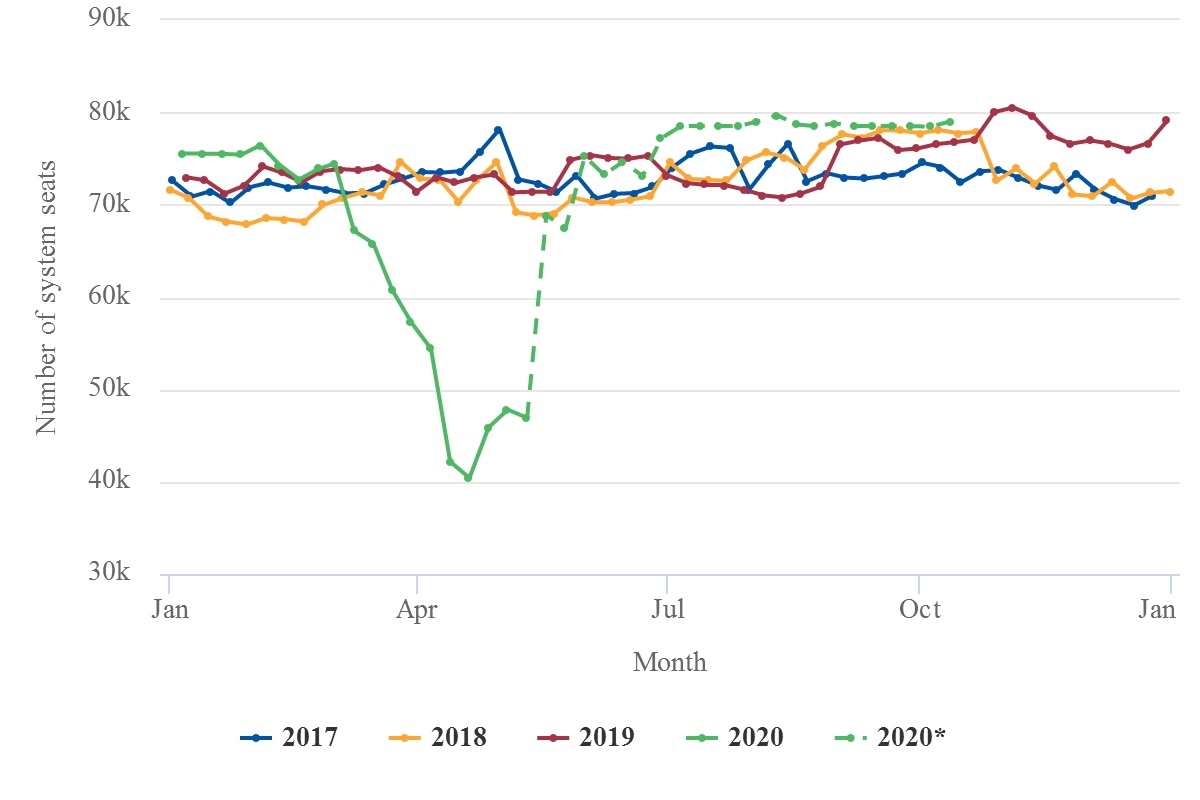 The whole privatisation process took years to get going, but then set stiff targets for an “exciting opportunity”

Japan is a country where the notion of privatising airports had not advanced as far as it had in some economically comparable countries.

That privatisation process began in 2011, when MLIT announced that it would privatise all national airports by 2020. The first process was to begin via a merger of the Itami and Kansai International airports’ management in Osaka, followed by a long term lease concession for the rights to manage runways, airport terminal buildings and car parking. MLIT has not succeeded in achieving its ambitious 2020 vision, but it has done much better than many expected.

That Kansai transaction fell partly to a Japanese company (Orix), and partly to a French one (VINCI), but since then most of the interest has come from Japanese corporations and financiers, apart from VINCI that is.

In order to maximise the potential of what will ultimately be the privatisation of almost 100 airports – the largest number in any country, anywhere – by bringing in foreign expertise, the job of the Transport and Infrastructure Ministry became one of convincing foreign investors of an “exciting opportunity”.

There were many factors involved in the government’s change of mind on privatisation, to the point where, together with Brazil and the concessions there, it became the epicentre of global activity.

Deficit, tourism and LCCs were the driving forces

Government deficit was a major reason; also the need to boost tourism across the country rather than just in Tokyo, and that is largely on track. The government was considered to have been lacking in that respect. There was little marketing as such, just subsidies to airlines to do it. 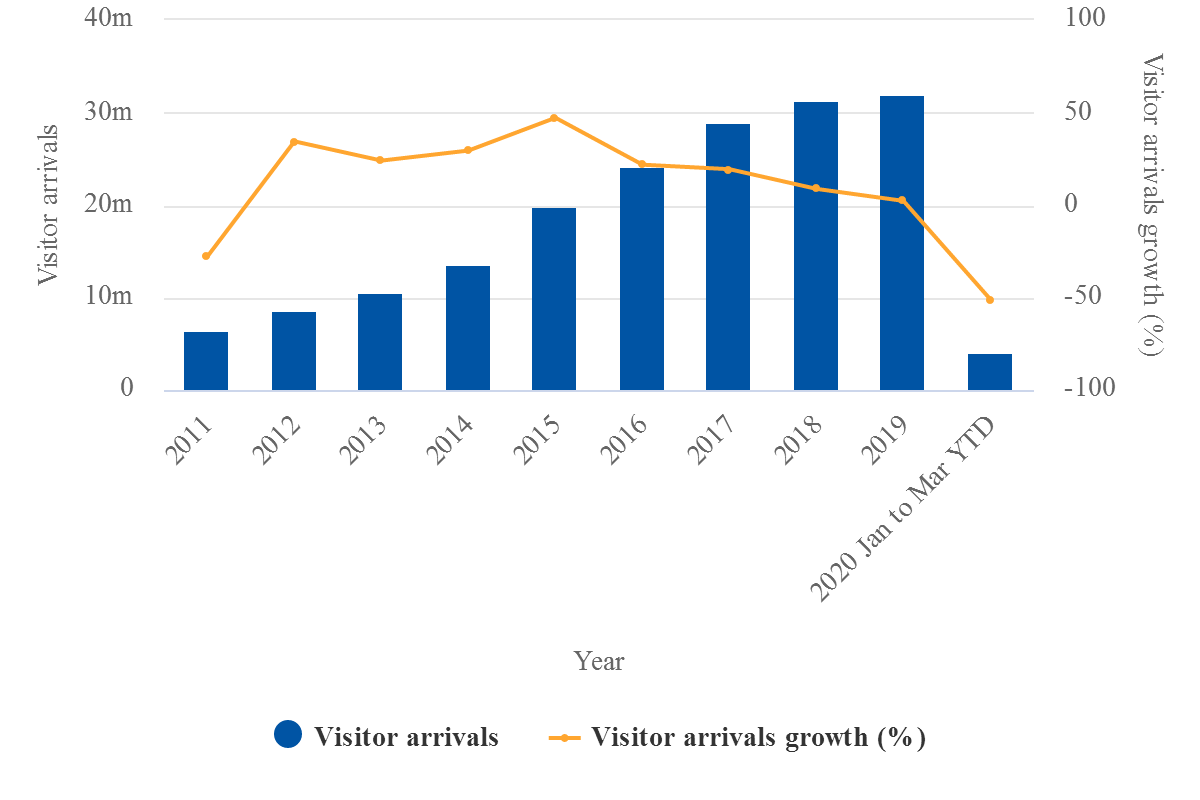 A variation in concession terms, such as length of contract, was always in the mix, and was dependent on how lucrative an airport could be. There is a balancing act between reducing risk to the operators and giving them the time and leeway to cover investment costs and make a profit.

The tourism focus was initially on Southeast Asia, but generally the visa regulations have been relaxed. A different focus on other places such as Western Europe was intended to come later, and was partially dependent on which aircraft types could operate direct thinner routes at smaller Japanese cities, and at a profit.

Now, it is simply a question of which aircraft will be operating, for which airline, and where.

Inbound tourism is important because outbound is, surprisingly, on the wane

Outbound demand is becoming a mature market generally, and younger people (millennials) are less inclined to travel than are their counterparts in Europe and North America.

There has been a notable increase in travel by women, though. The low cost airline Peach’s main customers have historically been women. Of course, the changing scenario now might be that all generations are less inclined to travel.

There are more LCCs in Japan now than there were, since attitudes to the model have slowly changed.

There is a chicken and egg situation – which would come first, the LCCs or the airports and terminals (there are now several in Japan catering mainly to LCCs)?

It is the case that the trend towards privatising smaller airports has encouraged a greater level of LCC participation, which was the intention. The increased presence of LCCs is thus a benefit, and continuing expansion is likely in that segment. Piers are now being built specifically for LCCs.

Public attitudes to privatisation have improved, but are still not fully positive

The concept of privatisation as a “good thing” is broadly agreed upon by political parties. There is common ground and a common purpose: to increase tourism.

That is not the case among the public though in places like Hokkaido, where a deal was done for eight airports on the island in Jan-2020 with handover dates from Jun-2020 to Mar-2021. There were fears that smaller airports could close, although it must be said that there are a lot of them for what is a fairly small island.

Despite a perception that the only shareholders in newly privatised airports are large companies, there are, in fact, numerous smaller investors. For example, the Osaka airports investors account for 20% of the equity and represent numerous sectors, such as power supply and railways, as well as the financial sector. It is reported that these investors are content with their position.

There are often benefits for small shareholders, in that they can provide certain services (similar to the position in India and the early privatisations there, which drew interest from small companies with a product or service to offer). Also, they will invariably be offered places on the board.

While VINCI could be among the shortlisted companies, Japanese conglomerates are at least as likely to be there

So, the question is which investors are likely to be interested in Hiroshima. In an airport serving a city of approximately two million people that is not especially an industrial or commercial city on the scale of Japan’s giants, but which is one of the most visited in the country (largely on account of the first use of an atomic weapon there, in 1945).

Back in Oct-2019 MLIT selected two bidders to proceed to a second-round review on its tender for the private operation of Hiroshima International Airport under the terms of a 30-year concession contract, but they were not disclosed.

At that stage, MLIT aimed to select a priority negotiation rights holder for the contract by Jun-2020 in preparation for the commencement of privatised operation at Hiroshima in Apr-2021.

VINCI could certainly be one of them, but they are more likely to comprise some of the Japanese conglomerates that have been actively pursuing the privatisation procedure from the start – for example, Mitsubishi Estate and Tokyu Corporation, which together with the Development Bank of Japan secured the Hokkaido airports as Hokkaido Airport Terminal Co Ltd.

Of course, all the candidates could now pull out. The ‘ball game’ is completely different from the one which existed when this procedure first started.

At one stage there were no further airport privatisation candidates after Hiroshima, although there are now.

Further bundling of airports may continue after the Hokkaido experiment. Nagasaki and Kagoshima airports, for example, will be bundled with other ‘island airports’, as were the Hokkaido airports.

The Application and Selection Procedures (MLIT) can be found here: