British Airways now holds more than 50% of the slots at capacity-constrained Heathrow, thanks to its bmi acquisition. Nevertheless, BA had managed to grow its holding for years, mainly due to secondary slot trading. After years of uncertainty over its legality in EU law, the EU clarified its position in 2008 and allowed the practice. It went on to commission a 2011 study which concluded that slot trading had clear beneficial impacts at Heathrow.

In this report, CAPA analyses the small proportion of the total number of Heathrow slot trades where slot values have been reported in the media and elsewhere. For many years until the mid 2000s, the average traded value per daily slot pair calculated from such transactions was around GBP4 million. A series of trades at more than GBP20 million per pair captured headlines in 2007 and 2008 before the market went underground. Surprisingly, after such a long quiet period, 2013 has seen two deals valuing Heathrow slots at GBP15 million per daily pair.

BA’s Heathrow slot holding is above 50% for the first time, thanks to bmi

British Airways is the biggest holder of slots at London Heathrow Airport, with 50.6% of the total for the summer 2013 schedule. This is the first summer season for which BA has held more than half of the slots (although it had 52.8% in the winter 2012 schedule) and its increase from 44.1% in summer 2012 is due to the acquisition of bmi. The significant growth in Virgin Atlantic’s share is mainly due to the slot divestment for domestic services following BA’s takeover of bmi.

*Delta operates services as a joint operation with KLM/Air France, and in their own right. These figures include those services operated as a joint venture.
Source: Airport Coordination Limited

BA was growing its slot holding even before the bmi takeover

Although it took BA’s acquisition of bmi to push its slot holding at Heathrow above the 50% mark, BA had been growing its slot portfolio at its main hub for many years. In summer 2001, BA held 36% of the slots and, by summer 2012, this had grown to 44.1%. BA’s weekly slot holding in the summer season grew by 16% over the 12 year period, while capacity-constrained Heathrow saw almost no growth in slots (less than 3%). 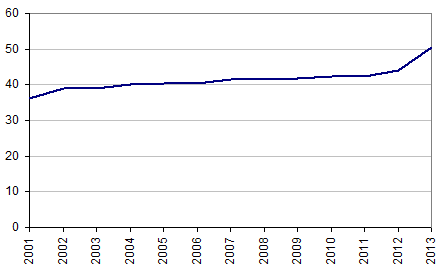 How was this possible? The answer lies mainly in slot trading. Airlines can add to their slot portfolios at Heathrow in two ways. The first is by allocation from the pool consisting of slots created by capacity improvements (runway optimisation in the case of Heathrow) and surrendered by airlines that exit the market.

The second is by transfer from other airlines. Strictly speaking, the transfer of slots is meant to involve the exchange of slots, whether accompanied by monetary or other consideration from the airline giving the less valuable slots to the airline giving the more valuable slots, but these transactions are generally constructed such that the net effect is equivalent to a sale of slots.

Until 2005, allocation of slots from the pool was more important numerically than the transfer of slots, but the latter has been more significant since 2006. BA’s weekly slot holding grew by 11% from 2006 to 2012, while the Heathrow pool total grew by less than 1%. 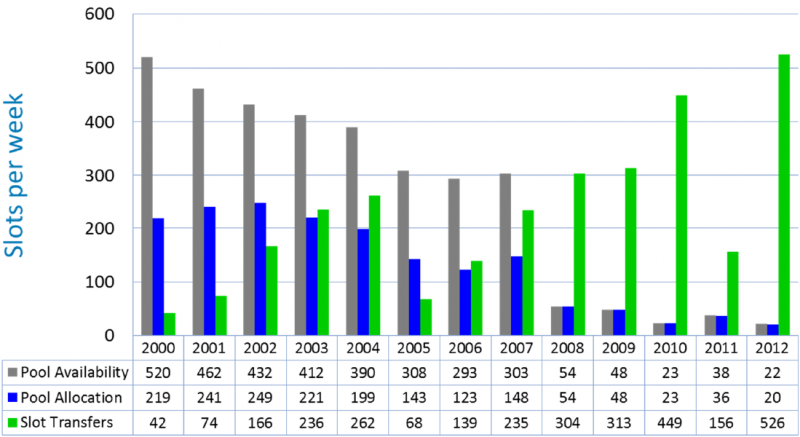 In Apr-2008, the European Commission clarified the EU position on secondary slot trading, previously thought not to be acceptable, by saying that EU legislation did not prohibit it. Thus the EU recognised the reality that such trading was taking place anyway and acknowledged that it brought certain advantages. Slot trading must be transparent and take place between willing buyers and willing sellers. Price disclosure is not required.

The slot coordinator for Heathrow (the body responsible for allocating slots to airlines and facilitating trades), Airport Coordination Limited, established a web portal, slottrade.aero, to help airlines wishing to buy, sell, lease and swap scarce airport slots. It provides online access to information on completed slot trades, giving details of the number of weekly slots traded from Airline A to Airline B for each airport and season, updated as each trade occurs and facilitates the posting of slot trade offers and expressions of interest.

"Secondary trading has had clear beneficial impacts at Heathrow"

A 2011 report prepared for the European Commission by Steer Davies Gleave concluded that “secondary trading has had clear beneficial impacts at Heathrow: it has increased the mobility of slot holdings, increased aircraft sizes leading to more passengers being able to travel within the constrained capacity, and increased competition on some key long haul routes, without having an overall negative impact on competition at the airport.” It considered that there had been some negative impacts on regional accessibility from Heathrow, but in most cases this was not due to secondary trading.

Based on a sample of Heathrow slot trades
Source: ACL 2009

Market values for slots are difficult to establish

The lack of any consistent reporting of prices paid in Heathrow slot trades makes it difficult, if not impossible, to establish reliable market prices. In a submission to the Jamaican Controller General’s 2009 investigation into its acquisition of Heathrow slots from Air Jamaica, Virgin Atlantic identified the challenges involved in valuing sots: “There are no published or standard values for slots nor is there any standard formula for assessing their value. The value of slots will be determined simply by market forces i.e. what interested parties are prepared to bid at the time the slots are offered for sale. Heathrow slot values for long-haul use are driven largely by the value of the flights using them.”

Virgin Atlantic went on to note the need for arrival slots before 07:30 for high-yielding flights arriving from the Far East, Africa, India and the Middle East, while arrivals between 06:00 and 10:30 are suited to arrivals from the US east coast, with arrivals before 09:30 preferred. Arrivals after 09:30 are less suited to the US east coast but can be used for US west coast arrivals. The value of slots also varies according to the economic cycle. In general, the earlier the arrival, the higher is its value. Regular daily slots at the same times every day are more valuable than those that not daily or are not at the same times each day.

Slot values fall through the day, according to Heathrow's analysis

In a presentation given in Sep-2012, Heathrow’s Head of Network Development Sarah Whitlam estimated the average value of a daily pair of slots at the airport.

The value varies considerably by time of day, with an early morning slot pair worth around GBP15 million, falling to GBP10 million at midday and around GBP5 million in the evening. She also estimated the value of a non-daily slot pair at up to GBP0.5 million for a single day.

Estimated average value of daily pair of slots at Heathrow 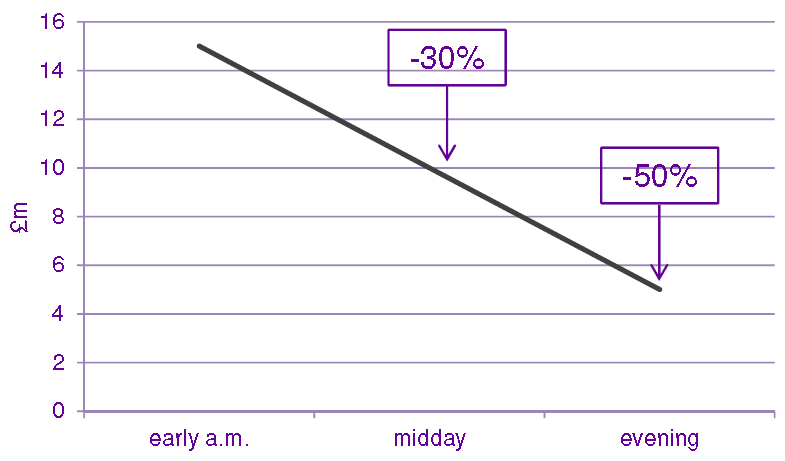 The difficulty in tracking slot values at Heathrow is owed much to the lack of published prices, but is compounded by the variety of commercial terms that may apply. For example, slots may be exchanged for other slots (whether the same number or not) at the same airport or even at another airport, for cash, as part of a sale and lease-back, between partners within an alliance or joint venture agreement, or to airlines in another alliance.

Slot trades reported in the media are few and far between

Heathrow slots per week traded and number of transactions 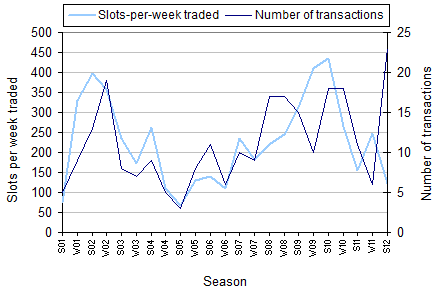 The transaction values that are reported in the mainstream and trade media are only a small proportion of the total: ACL says that it has facilitated about 200 Heathrow slot trades involving over 2,300 weekly slots since 2001. Publicly reported slot deals are most likely to represent the more exciting, high value end of the market.

They almost certainly do not represent the value of a typical slot for the stage of the cycle in which they occur. The years 2003 to 2008 saw a relatively high number of traded slot values reach the media. However, the market then all but closed its doors to outsiders in the years following the global financial crisis. This has now changed again, with the prices of two transactions being reported so far in 2013.

We have sifted through media and other reports to collate information on Heathrow traded slot values going back to 1998. The results, presented below, come with the caveats that these reports may not always be accurate and are certainly not comprehensive, although we have identified more than one source for each transaction wherever possible.

Two high value deals occurred in 2013 after years of little coverage of slot trades, but "strategic" factors affected their price

Using the small number of transactions presented, the average value paid for a daily slot pair is GBP9 million from 1998 to 2013, but this is distorted by the Alitalia disposals of 2007, the Continental purchases of 2008 and the two 2013 transactions (Delta and Etihad). The average excluding these four transactions was just under GBP8 million per daily slot pair, with the majority of valuations being in the GBP3 million to GBP6 million range.

Note that we have included bmi's 2007 year end valuation of its entire Heathrow slot portfolio (which it valued at GBP770 million for 5,044 weekly slot pairs, or just under 78 daily). This is the only company to have valued its entire slot holding on its balance sheet; other airlines only include slots acquired (most slots have been ‘grandfathered’ or inherited from the days before slot coordination became necessary at constrained airports).

The average transaction value for a daily slot pair from 1998 to 2007 excluding bmi's valuation of its holding and the Alitalia disposal, was just over GBP4.1 million. This makes bmi's valuation, which worked out at almost GBP10 million per slot pair, look generous (an impression that was not contradicted by the terms of its eventual sale to IAG).

Given this average and the fact that the GBP20 million-plus valuations seen in late 2007 and 2008 were outliers representing the peak of the market, the GBP15 million valuations per daily slot pair seen in 2013 are quite surprising, especially as the years 2009 to 2013 saw no headline-grabbing deals at all.

It would be dangerous to extrapolate from these recent transactions to conclude that the market is returning to a peak. Etihad and Delta both have specific strategic reasons for their deals: for Etihad, the slot purchase is part of a wider investment in Jet Airways and helps to further its Indian ambitions, while Delta is seeking to build up a Heathrow slot portfolio to complement its partnership with, and investment in, Virgin Atlantic.