Airport financial reports are now coming thick and fast for 1Q2020, a quarter which opened brightly for most of them but finished disastrously.

One of the latest is that of Heathrow Airport Holdings, which once had seven airports in London and the wider UK but now is reduced to operating only London Heathrow Airport – although that remains the busiest one in Europe, for now. When many regional UK airports have all but closed, Heathrow has to remain open to keep what remains of the UK economy ticking over.

Services are being rescheduled for as soon as this month, but with the airport's third runway all but written off, it is likely to come under renewed attack from the environmental lobby, having been reduced to one runway, a couple of terminals and just a few thousand passengers each day.

Heathrow Holdings is now solely responsible for the operation and maintenance of London Heathrow Airport.

Heathrow is still the seventh busiest airport in the world (2019) and the busiest in Europe, Heathrow Holdings' predecessor BAA having shed airports such as London Gatwick and Stansted airports, then regional ones in Southampton, Glasgow and Aberdeen, apart from various international interests.

Heathrow Express lost more than a quarter of its revenue

The revenue reduction is uniform, across the board, affecting aeronautical and non-aeronautical streams equally.

Surprisingly, there was a slightly larger reduction in car parking revenues. What departing passengers there remain might have been expected to be using private vehicles rather than any form of public transport or if arriving, to be met by them.

The rapid, partly owned Heathrow Express rail service to central London lost more than a quarter of its revenue compared to the same period last year.

Assets exceed liabilities by GBP3 billion, the difference not made up by cash and cash equivalents, even though they are at a higher level than they have been.

The difference between the pretax profit in the previous period and the loss in this one is GBP410 million.

Retail revenue per passenger increased over the full quarter

Despite falling passenger numbers, Heathrow was able to extract a 4% improvement in retail revenue per passenger, but that was undoubtedly before wholesale flight cancellations kicked in. Nevertheless, it is both a strange and impressive result.

Capital expenditure continued, but at best, preparations for the third runway will be delayed

Capital expenditure continued unabated during the period, with GBP224 million spent, which was an increase of 17%.

According to the CAPA Airport Construction Database, Heathrow has been committed to expenditure of close to GBP23 billion over a period through to the end of 2028.

However, a great deal of this concerned the third runway, a project that suffered a severe set back by way of a judicial enquiry, the result of which became known earlier in the year and which has delayed that project by five years at least.

As things stand now, it may never resurface.

Seat capacity decline appears to have bottomed out 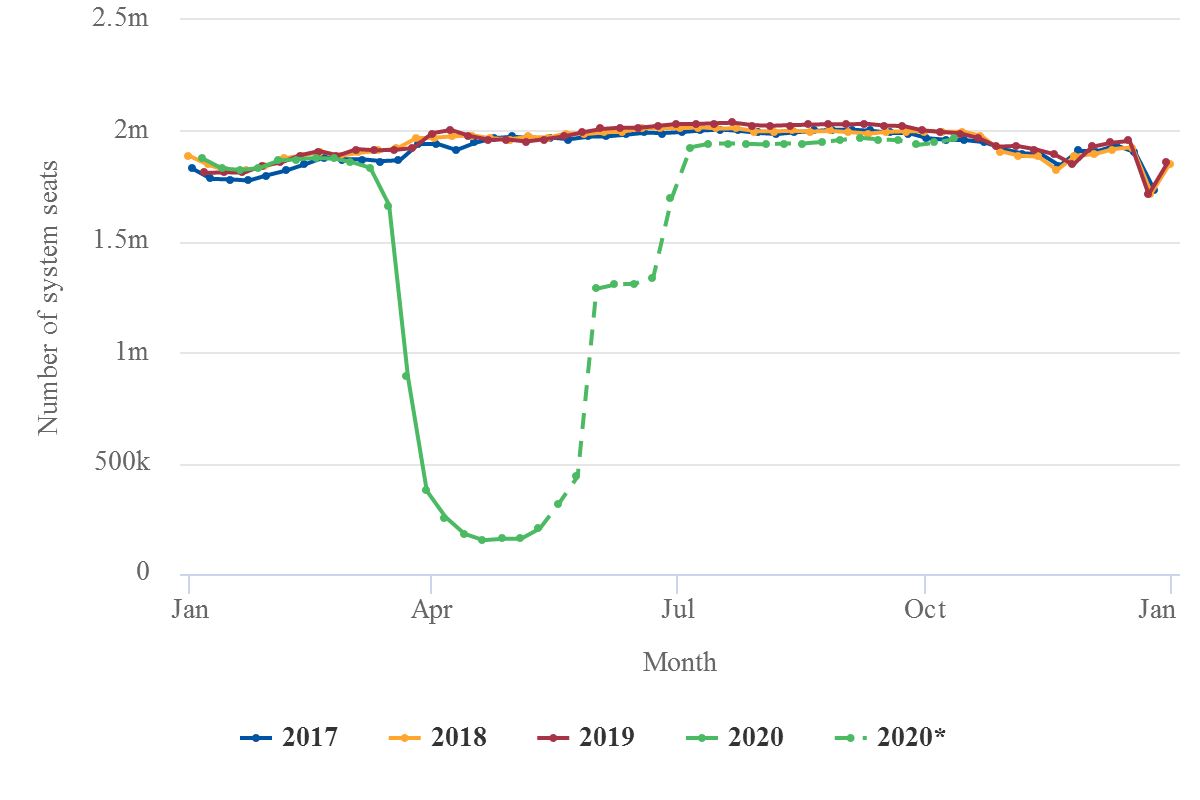 Until the second week of Mar-2020 capacity had been running at much the same level as in the previous two years.

In fact, the faster-growing Paris Charles de Gaulle Airport had been threatening to catch up and overtake Heathrow as Europe’s busiest airport. As operations at Paris Orly Airport – which is under the same management as Paris CDG (Groupe ADP) – have been suspended until later in the year and flights transferred to de Gaulle, it might well do just that.

No comparison between financial crisis chart and now

The impact of the global pandemic at Heathrow on actual passenger traffic has therefore again been mainly in the period from the second week of Mar-2020, towards the end of the reporting period here.

The chart below is of passenger traffic and growth levels at Heathrow Airport from 2009 (the first year following the global financial crisis of 2008) to the first quarter of 2020, the same as the financial reporting period. 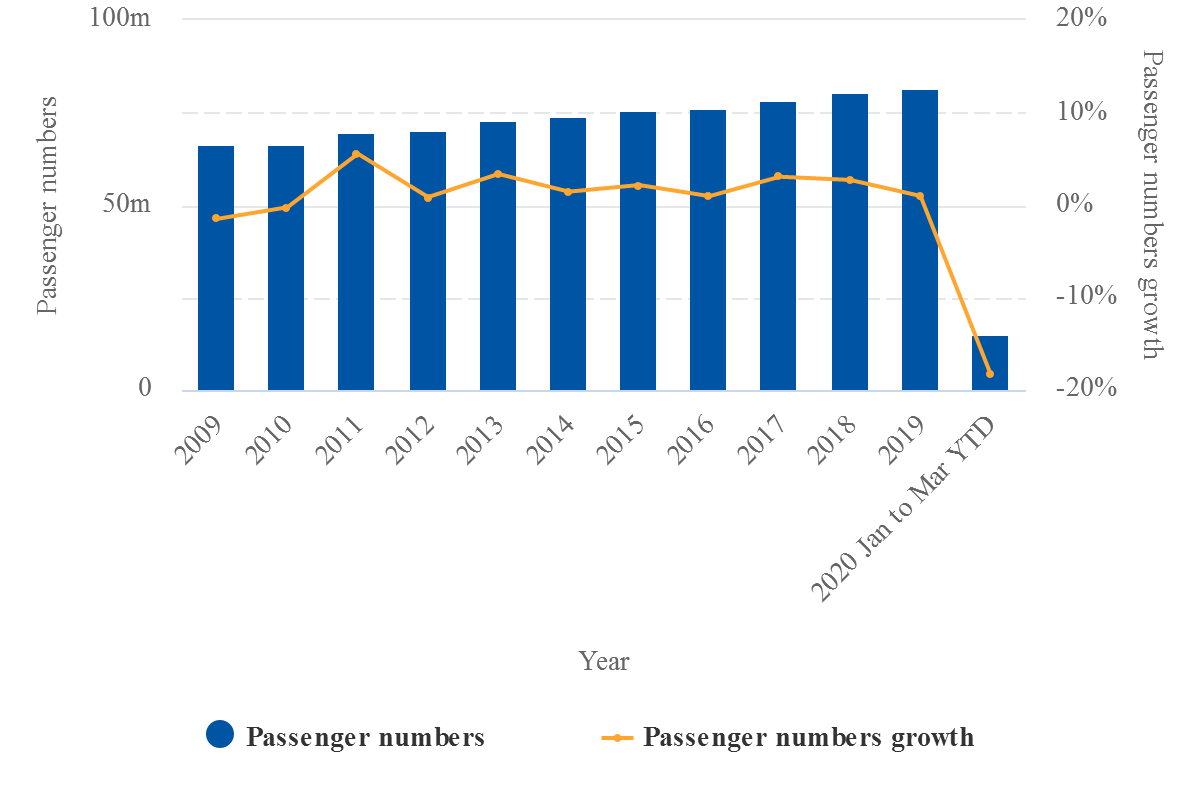 It can be seen that traffic dropped marginally in 2009 and 2010 and was quick to pick up again from 2011, after which growth has been at the same low level ever since (Heathrow remains as capacity-constrained as ever).

Until this period of the past three months that is, and the image is quite striking, especially when it is taken into account that the -18% is mainly accounted for by just two weeks' activity – or lack of it.

As one problem abates, another gathers momentum

Heathrow Airport’s CEO John Holland-Kaye says the airport is now operating from a single runway and has consolidated operations into only two terminals at the end of 1Q2020.

Mr Holland-Kaye stated that daily passenger numbers had shrunk "to the thousands", adding: "This is a major crisis for global aviation and no one can be sure of how fast we will recover from it".

Well, that is pretty obvious, and Mr Holland-Kaye’s biggest problem is staring him in the face.

It isn’t that services will not be resuming – they will. Already CAPA news reports have carriers such as Malaysia Airlines, EVA Air, Air India, ANA, JAL, American Airlines and many others filing for flights to start again, some as early as this month, albeit with much-reduced schedules.

No, his problem is that the airport has shrunk down to using just one runway and two terminals. There are people in the community who would like to keep it like that and they are going to put up a tough fight to ensure that it stays that way (the environment movement has not gone away).

As a privately held company (mainly by foreign funds), Heathrow was delisted from the London Stock Exchange in 2006, so a ‘share price’ is at least one thing the management does not have to worry about.