During the first of half of the decade Hawaiian Airlines’ business strategy was marked by significant long haul growth that required equally meaningful cash outlays. As a result, the company undertook significant borrowings and invested all of the cash that it generated back into the business.

Over the past two years Hawaiian’s growth has slowed, its long haul routes have matured and overall competitive dynamics in the airline’s markets have tilted in its favour. Those factors, along with others, have resulted in Hawaiian posting a robust financial performance. This has allowed Hawaiian to slash debt and improve its leverage, leading to a markedly stronger balance sheet.

Now Hawaiian is in a position to determine the optimal cash balances for its business. The company also continues to study allocation of its cash, but with a spike in capital expenditures in 2017 spurred by aircraft acquisitions Hawaiian is not gearing up for a massive change in shareholder returns.

Beginning in 2010 and continuing through the mid-part of the current decade Hawaiian launched more than 10 long haul routes and amassed a fleet of 23 Airbus A330 twin-aisle jets.

Source: CAPA Fleet Database.
Orders include those placed directly by the operator and by lessors assigned to the operator, from 21-Dec-2016 onwards.

Hawaiian’s profitability has fluctuated up and down during its expansion period but stabilised in 2014 and 2015, with net income jumping 165% year-on-year in 2015 to USD182.6 million.

Obviously some of airline’s favourable profitability in 2015 was driven by a drop in fuel prices, but Hawaiian also slowed its capacity growth year-on-year in 2015 from a high of 14% in 2013. 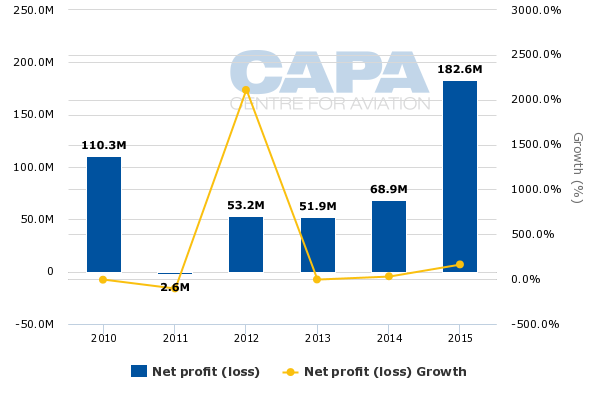 As its profitability has stabilised and grown, and as its long haul network reaches a certain level of maturity, some of Hawaiian’s attention has been freed up to focus on improving the stability of its balance sheet.

Hawaiian is now in the process of determining its optimal cash balances and leverage targets. Company vice president and treasurer Jay Schaefer recently explained that based on the airline’s modelling the conclusion was that the airline needed to maintain a cash target of USD500 million. He also stressed that Hawaiian needs contingent liquidity in order to withstand the inevitable black swan events that occur in the airline industry. 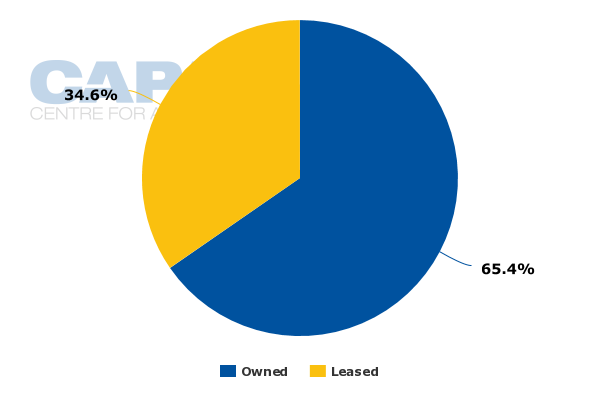 Source: CAPA Fleet Database.
Orders include those placed directly by the operator and by lessors assigned to the operator, from 21-Dec-2016 onwards.

Hawaiian expects to pay cash for the three A321neos and one A330 arriving at the airline in 2017, and Mr Schaefer expressed his hope is that the company continues that trend. He said that the A321neo is one of the easiest plans to finance on the market.

At present the company’s liquidity as a percent of trailing twelve months cash is 29%, but with its targeted cash balance of USD500 million that will drop to 21%, which Hawaiian believes puts it in a favourable position compared with its industry peers.

Hawaiian's projected liquidity targets versus its US airline peers 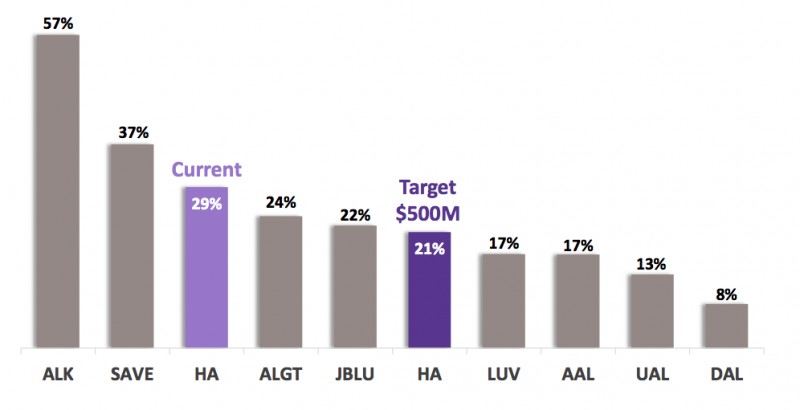 The company has also adjusted its leverage ratio targets during the past year. During 2015 its range fell within 3x to 4x, and now its aspiration is a range of 1.5x to 2.5x.

Similarly to nearly every US airline Hawaiian is facing cost inflation in 2016 and 2017. Its unit costs excluding fuel for 2016 are forecast to grow 2.5% to 4.5%, and projections for 2017 indicate an increase in the low to mid-single-digit range.

Approximately 1.5% of Hawaiian’s unit cost increase in 2016 is driven by labour contracts reached with three of its employee groups. Its guidance for 2017 does not include possible cost inflation from a new pilot contract. During 2016 Hawaiian’s pilots have been vocal about their wages reaching parity with an industry average that continues to move to the right.

The construction of a new aircraft hangar in Honolulu and expenses associated with purchasing and inducting the A321 into its fleet are also creating cost inflation for Hawaiian in 2017. Those are longer-term investments that do not have immediate payback but will improve Hawaiian’s operations, efficiency and network position over the longer term to deliver a formidable return on investment.

Hawaiian estimates 1% of its 2017 cost inflation is driven by facilities cost that includes the new hangar. Another 1% of its projected cost increase is attributed to its fleet transition, including the addition of the first A321 deliveries and accelerating the retirement of its Boeing 767 to YE2018.  Another 1.5% of Hawaiian’s cost creep in 2017 is driven by increases in wages and benefits.

As it braces for cost pressure in 2017 Hawaiian is working to cut its long through-cost structure through several initiatives including insourcing its international sales team, and optimising its fleet with A330s, A321s and Boeing 717s.

As airlines across all business models have enjoyed record profitability and improving balance sheet strength, shareholders have increasingly become more vocal about rewards.

During 1Q2015 Hawaiian repurchased 73% of its convertible notes, and together with a repurchase made during 4Q2014 this resulted in 91% of the original amount of the notes being retired. The company has concluded that the purchase was beneficial to shareholders by preventing dilution of its shares.

After posting free cash flow in 2015 Hawaiian initiated a USD100 million share buyback, and has USD40 million left in that programme. It is not clear if Hawaiian aims to increase its share buyback, but for now a dividend is lower priority for the airline given its planned increase in capital expenditures in 2017.

The company is forecasting capex spend of USD410 million to USD420 million in 2017, a solid increase from the USD160 million to USD170 million expended in 2016. Approximately USD300 million of Hawaiian’s planned capital expenditures for 2017 are dedicated to aircraft spend. 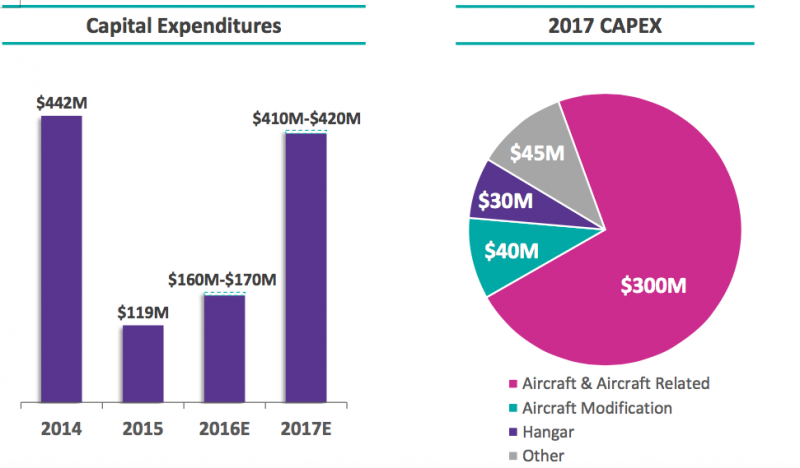 Hawaiian Airlines has undertaken a raft of changes during the past six years.

This activity has ranged from a significant international expansion to improving its financial position to a point where it can strengthen its balance sheet to prepare for the next phase of its business evolution – using its new fleet of Airbus A321neos to open new markets on the US west coast.

After Hawaiian completes the latest round of significant capital expenditures its shareholders may be looking for an increase in share buybacks. For now, it does not seem that Hawaiian is considering a huge increase in buybacks as it works to complete a crucial fleet transition.

But the company’s shareholders may soon become keen to see a bump in their rewards, especially if Hawaiian’s profitability streak continues.